Lawmakers on Wheeler: Polite, informed — and not Pruitt 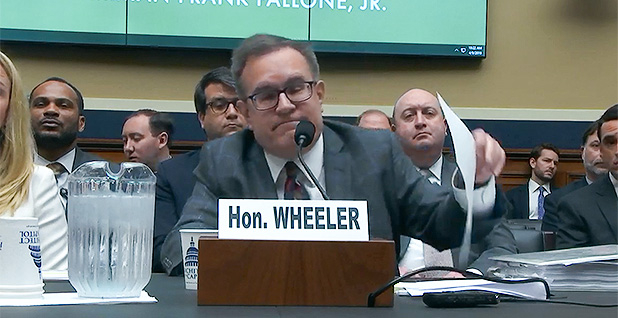 But she says she at least felt the administrator would hear her out and understand her reasons for wanting a single national emissions standard.

"He’s not confrontational," Dingell told E&E News after she questioned Wheeler at the House Energy and Commerce Subcommittee on Environment and Climate Change hearing.

"He’s got to do what the administration is telling him to do; he’s got a tough job. I am not happy with what this administration is doing, but he tries not to be as in your face as much as [his predecessor, Scott] Pruitt."

Wheeler’s less combative approach has been on display in the past two weeks as the EPA chief has testified at three House and Senate budget hearings.

But even as lawmakers have welcomed his more affable attitude and praised his deep policy knowledge, they concede it won’t help the Trump administration advance a highly partisan agenda on a divided Capitol Hill.

"I appreciate your willingness to come here today, but we need more from you in terms of transparency, responsiveness and action to address serious threats to our health," House Energy and Commerce Chairman Frank Pallone (D-N.J.) said at the hearing.

Rep. Paul Tonko (D-N.Y.), who chairs the subcommittee, said after that hearing, "The style, the styles are noticeably different."

But Tonko and other Democrats insist that Wheeler will ultimately be judged more on policy than on a winning personality. And in that regard, most Democrats, have seen few signs that Wheeler will depart from the deregulatory agenda pursued by Pruitt that has frustrated environmentalists.

California Democratic Rep. Scott Peters, who sits on Energy and Commerce, likened Wheeler to Energy Secretary Rick Perry — a "nice guy," but "no one is fooled" into believing that he is advocating anything but a partisan agenda.

Rep. Betty McCollum (D-Minn.), the House’s top EPA appropriator who has bashed plans to cut the agency’s budget by nearly a third, suggested Democrats and Wheeler are agreeing to disagree.

"I do believe that the EPA cares about the environment; it’s just the way that we prioritize some of the work that we do," she said at a hearing last week.

At public hearings, Wheeler, tends to sit forward in his chair, rest his arms on the table and look directly at lawmakers as they ask questions.

In his responses, his voice rarely breaks above the flat monotone of his native Midwest, and he only occasionally will look at a stuffed, briefing book in front of him.

It’s a break from Pruitt, the man he served as deputy administrator.

The former Oklahoma attorney general never appeared comfortable before Congress, nor was he fully versed or interested in their concerns. He often sparred with lawmakers over policy and political questions, frequently consulted with aides during testimony and went several months between hearings on Capitol Hill.

Wheeler’s former boss on the Senate Environment and Public Works Committee, Jim Inhofe (R-Okla.), said this week that there’s "no comparison" between his former top aide and Pruitt.

"Andrew is so good," Inhofe said in an interview. "He is very humble, and I think that’s a characteristic you don’t find in many people in positions like that. And I think Scott was kind of the opposite. He was arrogant."

Unlike Pruitt, Wheeler has benefited from not having an ethical cloud hanging over him, as well as having his extensive background in environmental policy, which in addition to his years of working for Inhofe on EPW, includes previous stints at EPA and more work as an energy and environmental lobbyist.

Said Inhofe, "This guy has lived the job for decades."

Indeed, Wheeler has spent nearly 30 years in Washington advancing his career by balancing the competing interests of agencies, K Street and Capitol Hill as he worked for each one.

By contrast, Pruitt had no ties to Washington before becoming administrator and made his name by leading partisan lawsuits to halt EPA actions with no room for compromise.

Sen. Lisa Murkowski (R-Alaska), who had Wheeler testify before her Interior, Environment and Related Agencies Appropriations Subcommittee last week, said his experience has made Wheeler a standout from most Cabinet-level witnesses who often can’t answer questions without consulting briefing books.

"I was very impressed with the level of just in-depth detail that Wheeler had on every one of not only my questions, but on the questions that others had," she told E&E News.

Rep. John Shimkus (R-Ill.), the ranking member on the Energy and Commerce Subcommittee on Environment and Climate Change, said he thought Wheeler performed well in his appearance before the panel earlier this week, which was far less contentious than when Pruitt testified.

"Pruitt comes in carrying a backpack of 110 pounds through his own personal decisions — Wheeler does not," Shimkus said in an interview yesterday.

"This guy served three-fourths of his career in government. … He’s more a technocrat; he’s more a policy, answer-the-questions [witness]. Pruitt, with all that burden, at least in front of our committees, there was fighting back and forth."

Without the cloud of scandal that followed Pruitt, Wheeler is "more successful for the EPA in terms of telling their story, versus having someone they can focus more on their personal decisions and kind of weave a corruption story based on other things," Shimkus said.

Lawmakers said Wheeler’s familiarity with the issues, compared with Pruitt, might not help him advance major policies on Capitol Hill but will at least allow them to look for common ground and build comity.

Dingell told Wheeler at one point during the hearing, "I know you are well-versed on issues like I am."

She got no promises from Wheeler when she asked about a possible EPA office closure in Michigan but seemed at least satisfied when the EPA chief said he would take another look at shutting the facility in Grosse Ile, Mich.

Rep. Fred Upton (R-Mich.), a senior Energy and Commerce member who has pressed EPA on tighter regulation of per- and polyfluoroalkyl substances (PFAS) in drinking water, said Wheeler was "approachable" on the issue despite some differences. Upton said he was pleased that the EPA chief had agreed to meet with him on the topic in the coming weeks.

Wheeler, whose answers are rarely personally revealing, offered a brief glimpse into his approach to Congress when McCollum noted that a recent EPA budget hearing was almost over.

His reply: "Time has flown."