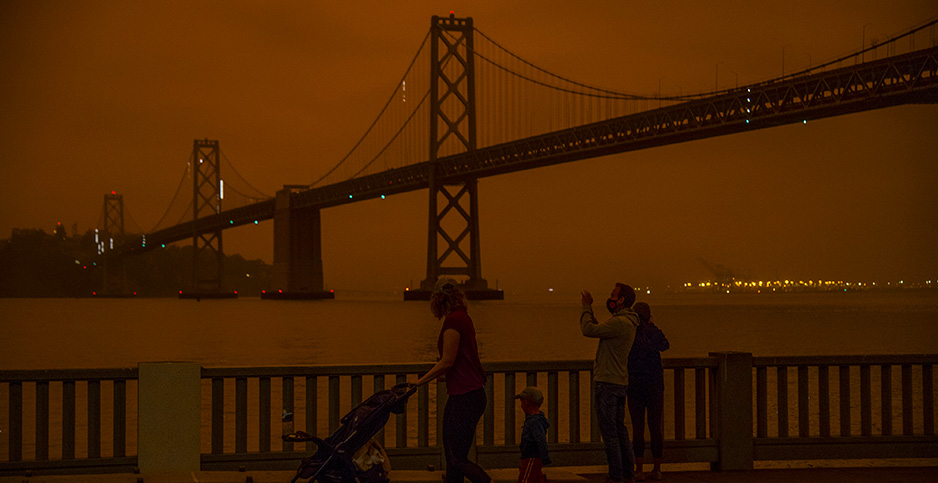 An orange glow over San Francisco yesterday because of smog and smoke from wildfires. Terry Schmitt/UPI/Newscom

"Given the severity and speed in which these fires are spreading across the state, we urge you to expedite the declaration process to ensure that local communities have the resources they need to respond to and recover quickly from these devastating wildfires," said Democratic Sens. Jeff Merkley and Ron Wyden, as well as House members — four Democrats and Republican Rep. Greg Walden — in letter to Trump.

Like California, Oregon is grappling with multiple fast-spreading fires in populated areas as well as several national forests — blazes that are drawing fresh attention to the Forest Service’s backlog of projects meant to reduce wildfire risks.

Both states are dealing with high winds and a heat wave that has encouraged the spread of wildfires. Oregon faces its worst drought in 30 years, the lawmakers said. Expediting the request of Oregon Gov. Kate Brown (D) for a disaster declaration will help as efforts turn to assessing wildfire damage, they said.

The National Interagency Fire Center reported 14 large active fires in Oregon, in addition to 24 in California. Tens of thousands of people have been forced to evacuate from their communities.

Sens. Steve Daines (R-Mont.) and Dianne Feinstein (D-Calif.) said yesterday they’ve secured a public hearing on legislation to ease some regulatory hurdles for forest management projects, such as not requiring a renewed environmental review when new information emerges about potential effects on endangered species — a legislative fix to a court-imposed requirement.

The Senate Energy and Natural Resources Committee will take up the bill at a hearing next week.

The bill, S. 4431, the "Emergency Wildfire and Public Safety Act," would also allow the Forest Service to declare emergencies in certain areas affected by wildfire, allowing for restoration with less-extensive environmental review.

"More than 2 million acres have already burned this year in California, and the situation is getting worse by the day," Feinstein said in a news release.

"This is a crisis all across the Western United States," she said. "We need the ability to responsibly clear dead trees and other biomass that will otherwise feed these destructive and often deadly wildfires."

The suddenly busy pace of this fire season contrasts with last year’s less-extensive fires, and it may also draw attention to the "fire fix" Congress enacted in 2018 to create a disaster fund for wildfire suppression.

Although Congress passed the deal two years ago, it didn’t take effect until this fiscal year, helping the Forest Service avoid transferring funds from non-fire-related accounts to cover rising costs.