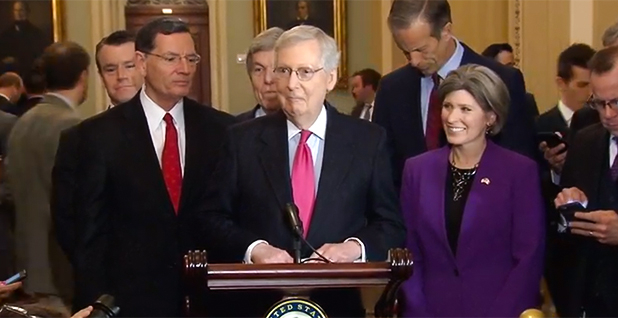 The Senate this week is heading into skirmishes regarding new disaster funds for Puerto Rico and a controversial rules change that would speed the confirmations of most of President Trump’s nominations.

The House, meanwhile, faces key budgeting decisions that must be addressed before the already behind schedule fiscal 2020 appropriations process can really take off.

Senators return tonight to a cloture vote on the latest round of emergency spending to help states and territories battered by natural disasters in recent years.

The vote will determine the fate of the Senate’s nearly $13.5 billion disaster package, H.R. 268, the latest installation of emergency spending to help areas devastated by a spate of wildfires, hurricanes, floods, tornadoes and earthquakes.

"Many states are currently bearing heavy burdens in the wake of powerful natural disasters," Senate Majority Leader Mitch McConnell (R-Ky.) said Thursday. "We have the opportunity to deliver critical resources to the communities facing a long road back to normal."

But Democrats have criticized the bill’s funding levels for Puerto Rico, which Trump told Republicans last week has already received too much federal relief money.

McConnell has blocked all senators from offering amendments, making it unclear whether Democrats will filibuster.

Vermont Sen. Patrick Leahy, the top Democrat on the Appropriations Committee, has proposed an amendment that would boost Puerto Rico’s share of the package, while also handing an additional $250 million to EPA for water infrastructure grants for affected communities (E&E Daily, March 28).

Appropriations Chairman Richard Shelby (R-Ala.) said Thursday that Republicans were reviewing Leahy’s proposal. "We’re not there yet," he told reporters.

Shelby said it was unclear whether the disaster bill he wrote will clear tonight’s procedural vote. "We’re going to have to agree on some things to move it," Shelby said, adding the week ahead "will be interesting."

It’s possible the two sides could reach an agreement that would allow the bill to proceed, including assurances that an expected House-Senate conference committee could negotiate a final bill with more help for Puerto Rico.

However, Shelby noted ultimately Congress would also have to consider Trump’s concerns regarding Puerto Rico, including the island territory’s shaky fiscal management.

"At the end of the day, we got to get the president to sign something," he said.

The wrangling over new dollars comes as the administration is under growing pressure from both parties to free up billions of dollars in already appropriated, but unobligated, funds.

Sen. John Cornyn (R-Texas) last week filed an amendment to the disaster bill requiring the White House budget office to "promptly" disburse nearly $4 billion of disaster aid for Hurricane Harvey relief headed for his state in the law Trump signed more than a year ago.

‘No rush’ on House extenders

There’s appetite in the Senate for using the disaster package as a vehicle for extending a suite of expired energy tax breaks, but the House continues to move more slowly on the issue.

Despite rumors the House Ways and Means Committee may include extenders in a markup this week on other tax matters, a senior Democrat on the panel said last week that was unlikely (E&E Daily, May 26).

However, Oregon Rep. Earl Blumenauer
told E&E News on Thursday that committee members are starting to put pen to paper on the tax breaks.

"People are thinking about it," he said. "I think a lot of people will be maybe ready to put their markers down."

Democrats are still "unwrapping" the all-GOP tax overhaul of 2017, he added, while also considering the fiscal impacts of extenders and how the incentives tie into a broader tax agenda.

"I don’t think we’re in any rush to get ahead of ourselves," Blumenauer said. "There’s going to be a little delicate dance with the Senate. There are different priorities."

Once the Senate resolves the disaster package, it will turn to a potentially bruising fight over a GOP resolution that would reduce the amount of time most executive branch and judicial nominations can be debated after cloture is invoked from 30 hours to two.

The proposal would maintain the current time frame for Cabinet officials, some commission-led agencies, Supreme Court and appellate nominees.

Democrats have signaled they’ll oppose the cloture motion McConnell filed last week, setting the stage for the Kentuckian to once again go for the "nuclear option," which allows a simple majority of senators to change the chamber’s arcane rules (E&E Daily, March 29).

Both parties have used the maneuver during the last six years, leading to fears it will eventually be used to eliminate the legislative filibuster.

There’s also reservations among many Republicans, including Alaska’s Lisa Murkowski, about making permanent changes without bipartisan consensus, but GOP leaders have said they’re confident they have the votes to make the change.

House Democrats will decide this week whether they will mark up a fiscal 2020 budget resolution, the nonbinding fiscal blueprint that serves as a guide for appropriators as they write the 12 annual spending bills.

"That’s what we have been working on for the past two months, trying to figure out how we can get 218 votes," said Yarmuth, referring to the majority of the House needed to adopt a resolution.

Yarmuth has said the resolution would not lay out a path for pursuing the progressive-backed ambitious Green New Deal but rather would focus on more narrow initiatives such as clean energy investments and tax credits for electric vehicles. He acknowledged the move could draw opposition from the left.

If a budget does not move, Yarmuth said, he would go ahead with marking up a more narrow piece of legislation that would raise spending caps in fiscal 2020. It would allow appropriators to then begin writing spending bills after the two-week April spring recess.

Without changes in caps, discretionary spending for fiscal 2020 would fall by 10 percent over current levels — $576 billion for defense; $542 billion for nondefense — as required by federal budget law.

The administration has used the pending restraints to justify deep cuts for EPA as well as reductions for the Energy and Interior departments in fiscal 2020.

Yarmuth said he’s working on numbers right now that would call for increasing nondefense spending at a higher rate than defense spending. He acknowledged those figures would amount to an opening bid in what are likely to be arduous negotiations with the Senate over final spending.

While the Senate Budget Committee adopted its own budget last week with current caps in place, it did leave room to raise them if lawmakers can come up with a bicameral deal.

Shelby said he plans to continue hearings on the administration’s budget request but acknowledged uncertainty over whether a top-line budget number will slow the process of writing the spending bills.

"If we don’t get a number then we have to make some basic assumptions and that’s difficult," he told reporters last week.