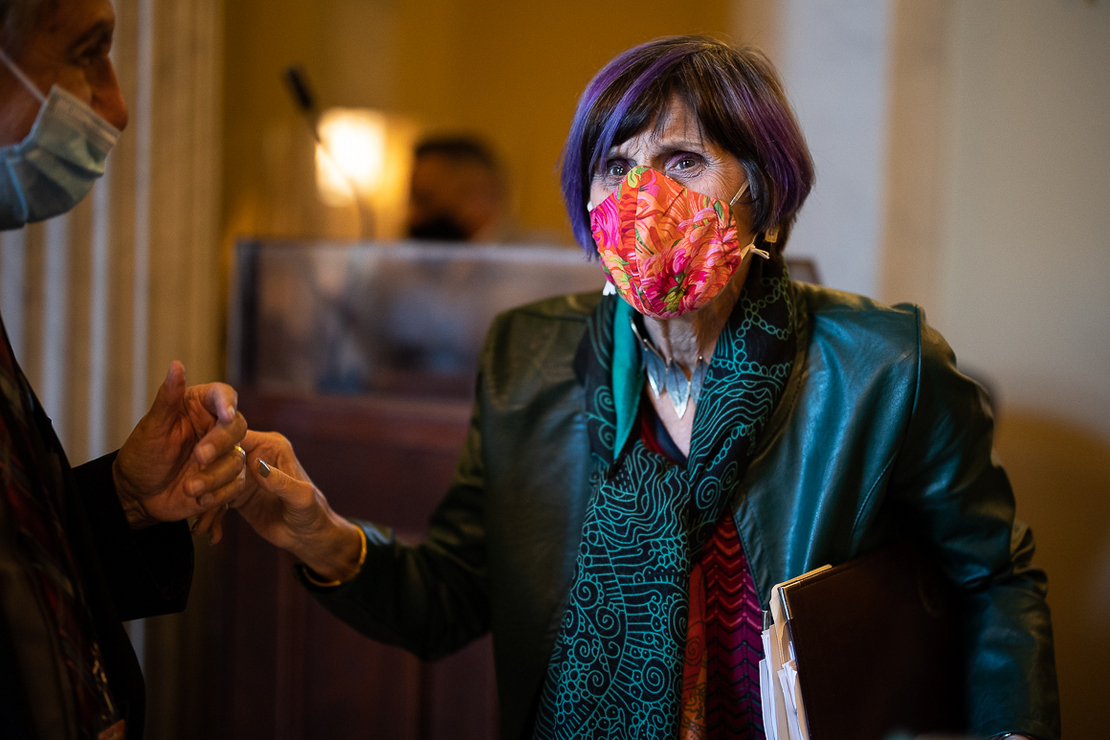 EPA and the Energy and Interior departments would see notable increases, along with other agencies, but the final numbers reflect the Democrats’ weak majorities in both chambers of Congress.

Democrats, for example, could not get GOP colleagues to accept new spending for the United Nations’ Green Climate Fund. Still, summaries and fact sheets highlight climate issues and equity efforts.

The House is expected to vote on the package, H.R. 2471, later today before Democrats leave for their retreat in Philadelphia. The chamber is also voting on a short-term continuing resolution through March 15 in case the Senate — which is not in session today — needs more time to debate the omnibus.

The legislation includes all 12 spending bills. It also includes an extension of the flood insurance program, $13.6 billion in military and humanitarian aid for Ukraine, and $15.6 billion for Covid-19 relief. Plus, negotiators added language from Senate-passed cybersecuruty legislation (E&E Daily, March 2).

The spending bills are nearly six months overdue, after being held up by partisan fights over how to divide dollars between defense and domestic accounts and whether to include contentious policy provisions.

With President Biden’s climate and social spending stalled in the Senate, the omnibus is likely the best shot for Democrats to get any energy and environmental priorities enacted ahead of the midterm elections.

“I am so proud of this government funding legislation, which delivers transformative federal investments to help lower the cost of living for working families, create American jobs, and provide a lifeline for the vulnerable,” said House Appropriations Chair Rosa DeLauro (D-Conn.).

“During this time of great uncertainty and change, we are tackling some of our nation’s biggest challenges,” she said, “including making health care more affordable, confronting the climate crisis, and protecting our national security.”

The Department of Energy would see $44.9 billion for fiscal 2022, an increase of approximately $2.9 billion compared to the previous year but short of the $46.2 billion requested by the Biden administration.

The bill would provide record funding for the Office of Energy Efficiency & Renewable Energy at $3.2 billion, an increase of $338 million, but less than what House and Senate Democratic appropriators had proposed.

The House originally set the funding level at $3.8 billion while the Senate went as far as proposing $3.9 billion for EERE. The White House’s budget requested $4.7 billion for the program.

The Advanced Research Projects Agency-Energy (ARPA-E) would get $450 million, an increase of $23 million compared to fiscal 2021. The House originally wanted $600 million and the Senate $500 million to match levels authorized in the Energy Act of 2020.

Negotiators did outdo the administration in funding DOE’s Office of Science, which oversees the nation’s 17 national labs. The omnibus deal would provide $7.5 billion, an increase of $449 million above fiscal 2021 levels and $35 million above the request.

The Office of Science is getting significant legislative attention in the effort to craft a competition bill. Both chambers are considering bills to reauthorize the agency (Greenwire, Feb. 18).

The legislation has more than $185 million for cybersecurity, energy security and emergency response. The amount is below the president’s request for almost $20 million above the current levels.

The omnibus also matches last year’s funding bill with $27.5 million for DOE’s effort to find interim storage for the consolidation of commercial nuclear waste that had previously been reserved for Yucca Mountain in Nevada.

The bill does not contain a policy rider being pushed by New Mexico and Texas lawmakers against their states hosting interim storage facilities. Those lawmakers worry such facilities could turn into permanent repositories.

Double-digit increases favored by Democrats failed to materialize, but EPA getting $9.5 billion reflects a push to rebuild the agency after years of flat spending or cuts under the Trump administration.

The negotiated spending level is about 3 percent over last year’s number, but $1.6 billion below the administration’s request, which envisioned hiring as many of 1,000 new workers.

EPA’s core science and environmental work would rise about $224 million to $3.5 billion. The bill also includes $587 million for politically popular geographic conservation programs, like the Great Lakes Restoration Initiative and efforts to preserve the Chesapeake Bay, and $539 million for environmental monitoring and compliance work.

Environment justice programs would be funded at $100 million, according to a fact sheet, a significant increase over $12 million in current spending but only half what the White House had proposed.

The Interior Department would see its funding rise, but the omnibus falls well short of the billions of dollars Democrats wanted for more robust conservation efforts and launching a Civilian Climate Corps.

The bill would provide $14.1 billion for Interior, a $776 million, or about 5 percent, increase over current spending. Nearly every agency within Interior would see its top line rise in fiscal 2022, enough to meet current needs and, in some cases, expand and start new initiatives.

The National Park Service would see it funding rise to $3.26 billion, a $142 million increase over current levels. Committee summaries said the proposal would allow for full funding of NPS operating costs, which would be about $79 million over current levels.

The Bureau of Land Management would receive $1.41 billion, about $101 million above current spending. The bill would include increased dollars for several conservation efforts, including $78 million for sage grouse conservation and $31 million for threatened and endangered species.

The package boasts “a national initiative to reclaim abandoned mines and cap orphan oil and gas wells,” according to an official summary of the Interior portion of the legislation produced by Democrats on the House Appropriations Committee. The abandoned mine land state grants program, meanwhile, would be funded at $122.5 million, an increase of $7.5 million.

The package would invest in offshore wind development with a $37 million allocation for the Bureau of Ocean Energy Management’s Renewable Energy Program — an amount that would match the House-passed Interior-EPA bill for fiscal 2022.

The Democrats’ fact sheet for the Interior-EPA portion of the bill is notably silent on its commitments to the Civilian Climate Corps, support for which has in the past been a hallmark of the party’s environmental agenda.

There were wide expectations that the omnibus would make investments in creating such a green jobs placement and training program following stalled legislative action on the separate, larger climate and social spending package.

Other spending in the bill includes:

The bill would restrict oil and gas development activities near Chaco Culture National Historic Park in New Mexico, which has become the subject of a proxy battle between Democrats and Republicans over how to balance protecting sacred public spaces while promoting domestic energy production.

NOAA spending would amount to $5.88 billion, a $447 million increase. Climate research funding would go up by $18 million to $200 million, including $10 million to help Americans adapt to climate change, according to a summary.

The NOAA Fisheries would see $1.02 billion, an increase of $51 million, with $6 million to help support wind farm development and $16 million to protect the Atlantic right whale.

The National Weather Service would see a $74 million increase to $1.17 billion. The agency would get $70 million more for new weather satellites, appropriators said.

The Agriculture Department would get just over $1 billion for conservation programs, including $7 million for the Healthy Forests Reserve Program.

The bill would provide $3.5 billion, a $217 million increase, for agricultural research efforts. The bill also includes $78.3 million for climate issues and $1.45 billion for water and waste loans, and more than $653 million for drinking water and sanitary waste grants.

The bill says it recommends $1.5 billion for the State Department to help address the climate crisis but doesn’t include money for the Green Climate Fund.

The legislation, however, includes increases for the Montreal Protocol’s Multilateral Fund and the United Nations Intergovernmental Panel on Climate Change, appropriators said. And it would allow contributions to the climate Adaptation Fund and the Least Developed Countries Fund.

The bill also includes spending increases for a host of international environmental efforts. The Global Environment Facility would get $149.3 million, an increase of almost $10 million. Clean energy programs would get $260 million, $77 million above fiscal 2021 levels.

The omnibus would set aside $385 million for biodiversity efforts, $65 million above current levels. Another $125 million would go to address wildlife trafficking, $32 million above the president’s budget.

The omnibus includes significant spending to address contamination from per- and polyfluoroalkyl substances, which were used in firefighting foam and have polluted military facilities and surrounding areas.

The Transportation Department would get $26.9 billion in discretionary budget authority and $102.9 billion in overall budgetary resources, a $16.2 billion increase, according to appropriators. The bill would provide $775 million for infrastructure investments and unlock a “historic amount of funding” from the bipartisan infrastructure bill.

The National Science Foundation, also in line for a major boost if innovation legislation becomes law, would get $8.8 billion in the fiscal 2022 omnibus, a $351 million increase.