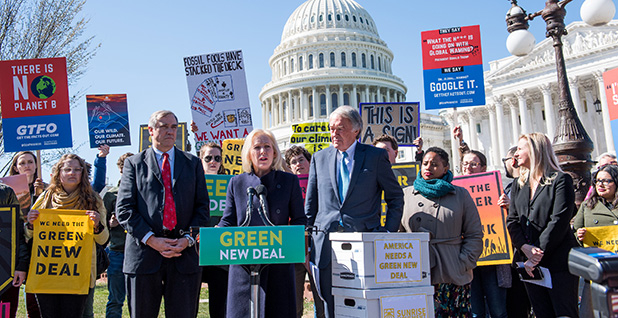 From the ashes of yesterday’s Green New Deal vote may come legislative compromise.

The Senate yesterday rejected a procedural motion on the progressive climate framework, with "no" votes from all 53 Republicans and four Democrats: Sens. Joe Manchin of West Virginia; Doug Jones of Alabama; Kyrsten Sinema of Arizona; and Angus King, the Maine independent who caucuses with Democrats.

All other Democrats voted "present," including every 2020 presidential candidate and its Senate sponsor, Sen. Ed Markey of Massachusetts.

The political battle isn’t over, but the vote has given climate change a historic Senate limelight and may offer an opportunity for scaled-back measures to address climate change.

Debate on the floor during the last few weeks has featured only a handful of instances of outright climate change denial, though Sen. Joni Ernst (R-Iowa) notably suggested global warming is caused by volcanoes.

Instead, Republicans have mostly ticked off talking points about the Green New Deal and touted the need for energy "innovation."

"We’re seeing, I think, a real tectonic shift taking place in the Republican Party away from blanket denial into they-don’t-know-what-yet," Sen. Sheldon Whitehouse (D-R.I.) told reporters after the vote. "And it’s going to be interesting to watch them as they move to whatever their next fallback trench is in this long battle for their fossil fuel funders."

Senate Majority Leader Mitch McConnell (R-Ky.), who has led GOP opposition to carbon pricing and regulation for more than a decade, acknowledged yesterday that climate change is real and caused by humans.

"I do. The question is how do you address it?" McConnell told reporters when asked if he believes in man-made climate change.

When the partisan dust settles, senators from both parties said they believe there is still an opportunity to legislate on energy policy.

Some Republicans think that might mean advancing the kind of carbon capture and advanced nuclear measures Environment and Public Works Chairman John Barrasso (R-Wyo.) has been pushing in recent weeks.

Cramer added that the Green New Deal debate raised some substantive policy discussions worth pursuing. Nuclear, in particular, could also be ripe for legislative horse trading, given its lack of carbon emissions, Cramer said.

He singled out a Monday floor speech by Sen. Lamar Alexander in which the Tennessee Republican laid out a comprehensive clean energy research effort he dubbed the "New Manhattan Project" (E&E Daily, March 26).

Several Democrats yesterday also expressed interest in Alexander’s ideas, which include doubling Department of Energy research spending, with a focus on advanced nuclear and battery technologies.

"I want to talk to Lamar," said Sen. Tom Carper of Delaware, the top Democrat on the Environment and Public Works Committee.

"I thought he had some interesting ideas, with respect to climate change, that I share," he said. "When you look at the preamble to the Green New Deal and you look at some of Lamar’s suggestions, there might be a way to meld them together."

Alexander said he has heard from "several" Democrats since the floor speech. He and a handful of other GOP senators have said in recent weeks that Republicans should have alternative policy ideas to make clear what they stand for on climate change.

"My hope is that it is not a Republican proposal, that it’s a bipartisan proposal," Alexander told reporters yesterday. "There’s not much in what I said that a Democrat couldn’t support."

Sen. Bill Cassidy (R-La.), who has carved out space in the climate debate for his own pro-natural gas policies, added that discussions continue among Republicans for a "conceptual" alternative to the Green New Deal (E&E Daily, Feb. 15).

Democrats are still solidly skeptical of all the Republican "innovation" rhetoric.

While plenty of Democrats support measures such as carbon capture and advanced nuclear, Republicans often use "innovation" as an argument for the status quo in the energy industry.

"Maybe we can have a side-by-side — we can vote on the Green New Deal and then we can vote on the clean energy Manhattan Project and see which reference to Roosevelt-era programs has the most votes," Sen. Chris Murphy (D-Conn.) jokingly said to reporters yesterday.

Murphy said Alexander’s ideas are a positive development. But, he added, "we need a step forward from people who are running for re-election."

Still, Alexander’s proposals could be executed largely through the appropriations process, rather than in separate legislation.

Congress is unlikely to pass much of anything in divided government, much less on controversial topics such as climate change, but promoting clean energy might be a place where both parties can score political points.

"We don’t need a big new law to do this," Alexander said. "We just need to direct the dollars that we are spending through our 17 national laboratories in an appropriate way."

The lead-up to yesterday’s vote, however, was pure political theater.

The Sunrise Movement kicked it off with a news conference outside the Capitol, featuring chants and an oversized Green New Deal banner.

It was joined by a gaggle of senators, including Markey and one presidential candidate — Sen. Kirsten Gillibrand (D-N.Y.).

The House Western Caucus followed up with an event where it continued to raise hyperbolic warnings about the Green New Deal, suggesting it would end everything from fresh cow milk to air travel.

Those claims are based in part off a fact sheet released, and then retracted, by Rep. Alexandria Ocasio-Cortez (D-N.Y.), the lead sponsor in the House. The existing resolution says nothing about cows or air travel, but it does suggest "working collaboratively with farmers and ranchers" to reduce emissions.

Rep. Paul Gosar (R-Ariz.), chairman of the Western Caucus, predicted the Senate vote would put the Green New Deal "out of its misery." He then drank a glass of milk to signify that one might be hard to come by under the Green New Deal that allegedly would limit cattle grazing.

It was all another sign that the Green New Deal vote was more about scoring political points than beginning a serious debate regarding climate change. Both sides believed they came out on top.

Democrats have for weeks celebrated that the Senate is finally debating climate policy, while Republicans are hoping it’s an easy trick for fundraising and the campaign trail.

To be sure, the Senate vote was not the last gasp of publicity for the resolution.

President Trump told Republicans at the GOP policy luncheon yesterday he hopes it gets more attention because he wants to run against it, according to two senators in the room.

And House Republicans have already indicated they will keep on talking about it and even attempt to force their own floor vote in the lower chamber.

In fact, the action will continue today on Capitol Hill, with a Senate Democratic news conference on climate this morning and, later, yet another House Republican event on the Green New Deal.

On the Senate side, Democrats will announce that they are forming their own "Special Committee on Climate Change."

Congress will also continue to spend billions of dollars on natural disasters that scientists say are made more frequent and more intense by climate change.

In what Minority Leader Chuck Schumer (D-N.Y.) called unfathomable "cognitive dissonance," the Senate moved to a procedural vote on a more than $13 billion disaster relief package directly after the Green New Deal failed.