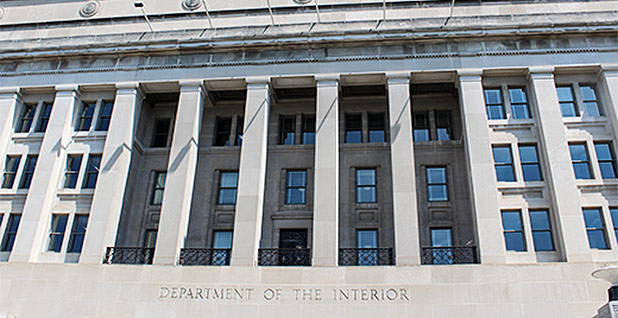 One of former Interior Secretary Ryan Zinke’s top priorities was a massive management overhaul at the department that aimed to give regional offices and front-line employees more decisionmaking power.

But more than two years after the administration launched the ambitious plan and Zinke’s December 2018 departure, the proposed reorganization is still a mystery to Congress.

One of the four panelists scheduled to testify before the Oversight and Investigations Subcommittee is from the administration: Scott Cameron, principal deputy assistant secretary for policy, management and budget.

Cameron, a career government executive, has appeared multiple times on Capitol Hill in the last few months to testify on the White House fiscal 2020 budget recommendation, which includes $27.6 million for the reorganization.

The Senate confirmed David Bernhardt as secretary in mid-April just before leaving on a two-week recess. House Natural Resources Chairman Raúl Grijalva (D-Ariz.) has said he wants Bernhardt to appear before his committee by mid-May.

Although Zinke left at the end of last year, reorganizing the roughly 70,000-employee department into 12 "unified regions" largely along state lines is still a top priority for Interior’s political leadership.

But Democrats and Republicans have expressed frustration over the department’s lack of details on the initiative.

"What I’m telling you is, information from Interior on ‘here’s where we’re at at the moment’ or ‘here’s where we’re not at’ has been very hard to get," said Rep. Mark Amodei, a member of the House Interior, Environment and Related Agencies Appropriations Subcommittee, during a hearing last month in which he asked Cameron about the reorganization.

"And that’s being generous," the Nevada Republican added.

Still, Congress gave the department $14 million for the project for fiscal 2019 to jump-start the initiative.

As part of the reorganization, top Interior officials, including Bernhardt, have said they want to move the Bureau of Land Management headquarters out West.

Cameron told reporters in March that the department was still interested in making that move but hadn’t yet decided on a destination.

Zinke in December 2018 told local officials from Nevada and Colorado in a conference call to expect a decision on BLM’s relocation in the spring.

Colorado, Nevada, New Mexico and Utah are among the possible locations under consideration for a BLM headquarters move.

Cameron also told reporters last month that the department is "only talking about moving something in the order of 40 positions" in 2020, out of roughly 300 BLM employees working now in the Washington, D.C., headquarters.

"And in some cases, those might actually be vacant positions, as opposed to taking entire families and shipping them West," he said at the time.