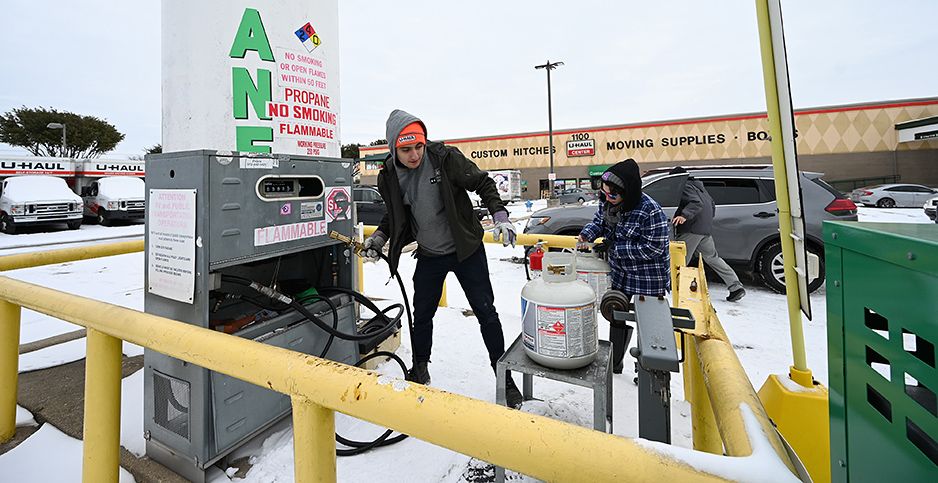 The Texas blackouts are fueling a larger political debate about climate change and the future of renewable energy, even as lawmakers from both sides of the aisle pledge further investigations into a humanitarian crisis that has left millions of people shivering in the dark.

The dynamic was on full display yesterday during a House Energy and Commerce Subcommittee on Energy hearing, initially scheduled to study how to decarbonize the power grid.

"As we know, Texas leads the nation in renewable power; it has transitioned faster than any other state," Texas Republican Rep. Michael Burgess said. "Congress needs to gather facts and understand the root causes of this energy crisis before speeding ahead with new renewable mandates that shift away from more reliable components of the existing energy fleet."

Burgess and other Republicans on the panel offered a tempered version of what some in the GOP have alleged over the last few days: that renewables are to blame for the blackouts.

The Electric Reliability Council of Texas (ERCOT), the state’s grid operator, has disputed that view. It says more than half of its offline generation comes from thermal sources, natural gas, coal and nuclear.

Rep. Jerry McNerney (D-Calif.) noted that the Republican response thus far has mirrored the party’s talking points in the wake of the California blackouts last year, when many Republicans blamed climate policies for the power failures.

"This is ludicrous," McNerney said. "The cause in both states are similar: extreme weather related to climate change together with underinvestment in utility and infrastructure resilience."

Craig Gordon, senior vice president of government affairs for Invenergy — which operates both wind and natural gas generation in Texas — told the panel that the state’s independent grid and its deregulated market structure share some of the blame.

ERCOT does not incentivize for additional capacity like other grid operators, Gordon noted, and its isolation from the larger grid means it has not been able to import power from elsewhere.

All things considered, Gordon said, "wind as a portfolio in the system actually outperformed day-ahead expectations."

"I think wind is often the whipping boy of the energy industry, so we’re kind of used to it," Gordon said, "But it is unfair, and it’s untrue."

He added, "If we had more transmission infrastructure, this could have been avoided."

That’s likely to be a sticking point for Democrats as they attempt to develop climate policy in the coming months.

House Democrats included roughly $70 billion for the grid in the $1.5 trillion infrastructure package they passed during the 116th Congress, the "Moving Forward Act," alongside measures to spur energy efficiency.

"Certainly, the infrastructure bill that we’re hoping we will be doing, similar or maybe even more expansive than [the] ‘Moving Forward Act’ that we passed last year in the Congress and through this committee, will be an opportunity for us to address some of these resiliency issues," Energy and Commerce Chairman Frank Pallone (D-N.J.) said.

An infrastructure bill could also offer a vehicle for other climate policies. To that end, Pallone said he plans to unveil in "coming weeks" an updated version of the "CLEAN Future Act," the wide-ranging climate bill E&C Democrats rolled out last year.

The legislation, which includes a federal clean electricity standard and a variety of spending authorizations for efficiency and grid infrastructure, will "serve as the basis for comprehensive climate action this year," Pallone said.

While the bill is not popular with the GOP, infrastructure is an area that could see some bipartisanship, particularly for Republicans interested in permitting reform, which some experts have called for as a way to get clean energy infrastructure on the ground more quickly.

"We’re going to need to build a significant amount of new linear infrastructure in this country, thousands and tens of thousands of miles of this," Rich Powell, executive director of the conservative clean energy group ClearPath, told the panel.

"It just cannot be the case," Powell said, "that it takes a decade from the beginning of attempting to site a project to actually realizing steel in the ground."

The Texas crisis is likely to permeate the climate and infrastructure policy debate.

Oversight and Investigations Subcommittee Chairwoman Diana DeGette (D-Colo.) added that she would "volunteer to put the resources of the Oversight Subcommittee to work in helping us make sure that we get to the bottom of what happened in Texas."

On the Senate side, Energy and Natural Resources Chairman Joe Manchin (D-W.Va.) is planning his own hearing focused on grid resilience.

"Chairman Manchin is staying abreast of the situation in Texas and other impacted areas across the country that left millions of people without power," Manchin spokesperson Sam Runyon said. "The committee intends to hold a hearing to examine grid reliability with resilience and affordability front of mind to assess how best to prevent this from happening in the future."