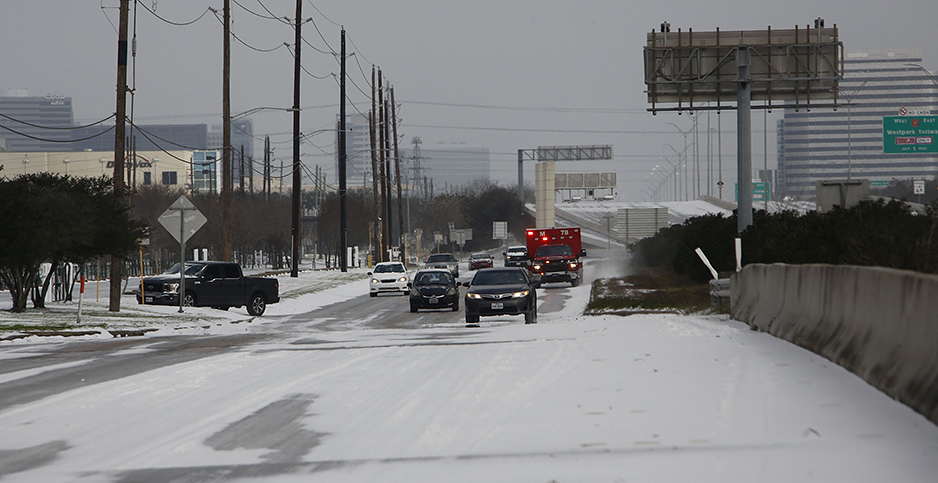 Snow and frigid temperatures this week left millions of people without power in Houston and beyond. China Nouvelle/SIPA/Newscom

Statements from some House Democrats, including from Texas, suggest Congress may seek more federal oversight of the nation’s most independent grid operator.

"The failure of some power plants to produce electricity when we need it most has meant a great deal of suffering for those affected by the blackouts," said Rep. Marc Veasey (D-Texas), an Energy and Commerce Committee member who represents a portion of the Dallas-Fort Worth metro area.

"In the days and weeks to come we will be examining the questions of infrastructure related causes, what measures can be taken to properly weatherize and insulate our power plants, and what interregional transmission that could bring in electricity from other areas of the country would mean for the Texas grid," he added.

Houston-based Rep. Sheila Jackson Lee said on Twitter yesterday that she had spoken to senior Department of Energy officials about pushing the ERCOT grid to be less isolated.

"We are working to see what help can be given to the state to get energy resources from other states," said the Texas Democrat. "Right now, we have no word from ERCOT as to when the energy will come on. This is a circumstance that city and county governments cannot change on their own."

A new member of E&C, Rep. Lizzie Fletcher (D-Texas) has been an advocate for an all-of-the-above energy strategy and is more moderate on fossil fuels than many of her Democratic colleagues.

"Like many of her constituents, Rep. Fletcher has been without power since [Monday]," said her spokesperson, Rocio Cruz. "She is focused on helping her community through this emergency, and she is also concerned with getting to the root cause of the capacity and supply issues that have exacerbated this disaster."

Veasey and Fletcher joined a letter led by Rep. Joaquin Castro (D-Texas) pressing ERCOT and the Public Utility Commission of Texas for information.

"Texans deserve immediate answers, accountability, and their power restored as soon as possible," they wrote.

An E&C aide said the committee expects to hear from DOE soon in a bipartisan briefing on the situation.

The Energy Subcommittee has a hearing tomorrow on the grid’s transition to a clean energy future. Texas is sure to become part of the discussion.

In the Senate, leaders of the Energy and Natural Resources Committee are monitoring the situation for similar lessons.

"Ensuring every American community has access to affordable, reliable, and resilient electric and other energy services is a top priority for ranking member [John] Barrasso [R-Wyo.]," said spokesperson Sarah Durdaller. "It’s an issue he will continue to address."

"I think our focus right now is ensuring that the millions of people across Texas who were impacted by the storm get the relief they need," Psaki said.

When asked about more federal involvement with the Texas grid or lessons learned for Biden’s clean energy push, Psaki suggested the question was premature.

"Clearly, as there are investments in the future in forms of energy across the country, they’ll need to plan for inclement weather," Psaki said. "But I think that’s a discussion and conversation that’s a little bit down the road."

Still, renewable energy advocates called on the administration and Congress to address the grid’s transmission and interconnection problems head-on as part of the upcoming infrastructure push.

"It’s time for Congress to pass an ambitious infrastructure initiative aimed at expanding and upgrading America’s grid," said Gregory Wetstone, president and CEO of the American Council on Renewable Energy.

Wetstone defended renewable energy’s contribution to the grid and highlighted fossil fuels’ failures. He blamed the blackouts on an "outdated grid that’s incapable of handling an increasing number of climate-driven extreme weather events."

"With an advanced grid that better connects Balkanized regional systems, we can prevent dangerous, widespread power outages from becoming the new normal, better harness our nation’s abundant renewable resources and meet our climate objectives," he added.

Some Republicans have jumped on the crisis to ding renewable energy.

"Bottom line: Thank God for baseload energy made up of fossil fuels," Rep. Dan Crenshaw (R-Texas) said in a Twitter thread yesterday. "Had our grid been more reliant on the wind turbines that froze, the outages would have been much worse."

Texas leads the nation in wind energy deployment, according to the U.S. Energy Information Administration. In 2019, power produced by wind made up about 19% of total generation in the state, but low temperatures and ice accumulation knocked out some 14,500 megawatts of wind, per ERCOT officials.

"This is a perfect example of the need for reliable energy sources like natural gas & coal," he said. "These blackouts would be devastating to [Montana]. No heat & no power simply are not options in the dead of winter."

While wind energy had its own problems, ERCOT officials have largely blamed "thermal sources" of energy — like coal, natural gas and nuclear plants — for problems with the grid. Of the 34,000 MW of generation forced off during the winter event, the grid operator said, about 20,000 MW was thermal.

Part of the problem, officials said yesterday, is that power plants in Texas are not built to withstand extreme cold events. Lack of insulation caused feeder pipelines to freeze in some sites.

Former Energy Secretary Dan Brouillette also blamed renewable energy for the problem. "Until we reach the point where we can have grid-scale storage and battery technologies that allow us to rely on this energy 24/7, it’s important that we not put in a situation where we are dependent upon it," Brouillette in an interview on Bloomberg TV.

Brouillette — and many Republicans — had similar comments during California’s rolling blackouts in September, caused by a combination of extreme heat and wildfire-related shut-offs.

Some House Republicans yesterday blamed the Biden administration’s energy policies as harmful to grid reliability, pointing to the cancellation of permits for the Keystone XL oil pipeline.

"The Biden administration’s energy policy — the halting of the Keystone pipeline, as a primary example — will cripple our economy, hemorrhaging jobs and subjecting millions to the weather’s whims," said Rep. Kat Cammack (R-Fla.), ranking member of the Homeland Security Subcommittee on Emergency Preparedness, Response and Recovery.

"We must shore up our domestic energy production, not just for natural disasters, but for our national security. Americans’ lives depend on it," she added.

Cruz tweeted in response, "I got no defense. A blizzard strikes Texas & our state shuts down. Not good."