Lawmakers want to use seaweed to fight acidification 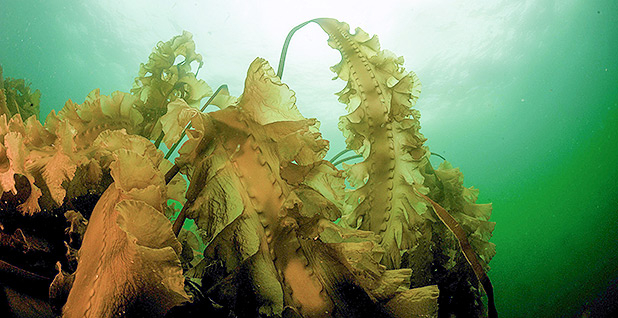 Lawmakers are advancing a plan to use seaweed and kelp to promote ocean health. Bigelow Laboratories for Ocean Sciences

A push to promote seaweed as a tool against climate change appears poised to move forward in Congress — once lawmakers resolve the dispute that’s holding up annual appropriations.

The fiscal 2019 appropriations bill for agriculture proposed by House Democrats calls for a working group on ocean agriculture, which would explore seaweed and kelp forests as a way to reduce ocean acidification and provide food ingredients and feedstocks.

The bill, H.R. 265, could come up for a vote today. It covers the fiscal year that started Oct. 1 but isn’t likely to be enacted before the border funding dispute that’s shuttered government offices ends.

Proponents say ocean plants can help counteract the effects of climate change. A working group on the issue has been a priority of Sen. Sheldon Whitehouse (D-R.I.), who added it to the Senate’s version of the agriculture spending bill last year.

The working group, comprising officials from the Department of Agriculture, NOAA and the Energy Department, would study the effects of mangroves, kelp forests, seagrass meadows and tidal marshes to de-acidify oceans, as well as ocean agriculture practices to produce feedstocks.

With the provision in the Democrats’ bill, as well as the version the Senate passed last year, it appears to have good odds of appearing in a final version. House Republicans didn’t include it in their version last year, but it easily passed in the Republican-led Senate and was co-sponsored by Sen. Lisa Murkowski (R-Alaska).

The new House bill is essentially a copy of the bill senators passed last year.

"Kelp is good for human health and good for our environment and oceans," Whitehouse said at the time, adding it would help promote an emerging industry in Rhode Island.

A working group would expand on efforts already underway with the help of USDA funding. The National Institute of Food and Agriculture has funded projects in Maine and New York, for instance.

In Maine, NIFA has awarded a company called VitaminSea LLC two grants totaling $700,000 to study the use of dried kelp flakes as a supplement in baguette-style bread. The bread contains twice as much potassium and three times as much fiber as regular bread, USDA said.

The company said the project could help it buy an additional 30,000 pounds of kelp annually from three harvesters and as much as 32,000 pounds from nine other harvesters.