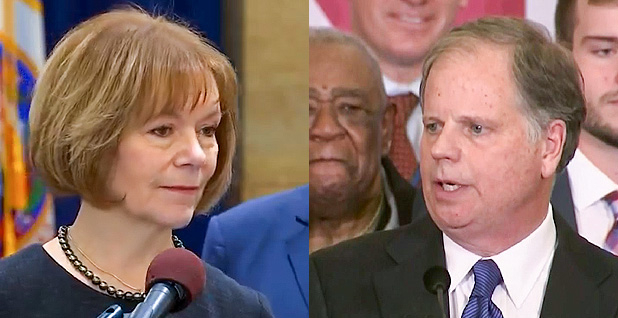 Doug Jones’ monumental Alabama Senate win has Capitol Hill abuzz. And consequences abound for the agenda, the makeup of energy and environment committees, and beyond.

"As I watched the returns last night, I was conflicted because we’d lose a seat, but proud of the people of Alabama because I believe they choose principle over politics," said Alabama Sen. Richard Shelby (R), who announced before Election Day he would not vote for Moore.

"I think it helps the Republicans in the long run that we won’t have someone that would be so radioactive, so controversial," he said.

Jones "deserved to win this race," said Senate Minority Leader Chuck Schumer (D-N.Y.) yesterday. "He’s a really fine man. He was an excellent candidate. He’s going to make an outstanding senator for the state of Alabama."

Schumer and other leading Democrats called on Senate Majority Leader Mitch McConnell (R-Ky.) to hold off on final votes for the GOP’s tax overhaul bill until Jones is seated.

"That’s how we do it in the House," House Minority Leader Nancy Pelosi (D-Calif.) said to reporters in the Capitol. "We don’t wait for full certification, we say the election has taken place, we seat the member and expect the certification to come later. I would hope they would do that here."

Democrats reminded McConnell that he called on Democrats to delay a vote on the Patient Protection and Affordable Care Act in 2010 when former Sen. Scott Brown (R) won a special election to fill Ted Kennedy’s old seat.

Lacking a significant legislative achievement in President Trump’s first year in office, Republicans are desperate to pass the tax measure. The impending loss of a conservative vote only increases the pressure.

As of yesterday afternoon, it appeared the Republican caucus had worked out a deal, with plans to have the massive bill on Trump’s desk by next week (see related story).

Franken’s replacement, Minnesota Lt. Gov. Tina Smith (D), is known as a clean energy advocate and could have interest in taking Franken’s ENR seat, depending on the priorities of party leadership.

Ranking member Maria Cantwell (D-Wash.) said yesterday she was unclear what would happen to Franken’s seat. "I haven’t even thought about that," she said.

ENR Chairwoman Murkowski said McConnell yesterday mentioned to her that "he’s going to have to look at those ratios."

However, they could also drop one seat from each party for an 11-10 ratio. "But we don’t know that" yet, said Murkowski.