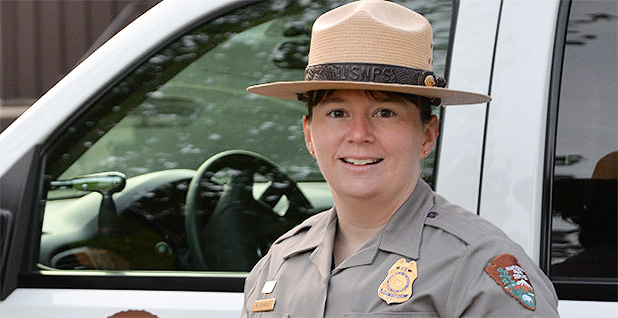 Michelle Schonzeit has been a National Park Service ranger for over a decade. Schonzeit/LinkedIn

A chief ranger with the National Park Service today accused the agency of "rampant sexual discrimination" and retaliation after she complained that a less-qualified male colleague had been promoted ahead of her.

"The time has come for this pernicious form of discrimination and harassment to end," said a complaint filed on behalf of Michelle Schonzeit, chief ranger of the Independence National Historical Park in Philadelphia. "Put simply, the #MeToo movement has now entered the Interior Department."

In a lawsuit filed this morning in the U.S. District Court for the District of Columbia, Schonzeit, a 14-year law enforcement ranger from Maryland, said she accepted the position in Philadelphia only after NPS refused to give her a similar job in the National Capital Region, which covers the D.C. area.

Schonzeit alleged that the Park Service reposted the job vacancy to allow a male candidate — who had less experience and was a friend of top managers — to get the Washington position.

"In other words, she was torn from her family because she had to choose to move to be promoted, when she should have been able to be promoted in her own home-commuting area," the complaint said.

As a result, Schonzeit is commuting back and forth to her Maryland home on weekends and has rented an apartment in Philadelphia. She has a 3-year-old daughter and is married to Lt. Simeon Klebaner, who has been with the U.S. Park Police for 21 years.

In an online post honoring law enforcement families, Schonzeit said her husband is a better paramedic than she is, but she said she can shoot better and outranks him.

"I’ve rappelled with a rifle down Hoover Dam," she said. "We’ve both saved numerous lives in our careers and helped protect some of the places most sacred to Americans."

Schonzeit’s attorney is David Weber, the former assistant inspector general for investigations at the Office of Inspector General of the Securities and Exchange Commission, who started his career as an NPS ranger. He gained attention when he was fired from his job at the SEC after he became a whistleblower, reporting staff misconduct in the investigation of Bernard Madoff, the financier who defrauded thousands of investors of billions of dollars.

"If the National Park Service can discriminate and harass a female chief ranger, then there are no bounds and no protections for any employee," Weber said in an interview this morning.

Weber said Bernhardt had been made "personally aware of this case" before the lawsuit was filed.

"I’m very disappointed that he has not taken steps to address the injustice in this case, and we call upon him to do so," Weber said.

The Interior Department declined to comment, referring questions to the Justice Department. Neither the National Park Service nor DOJ responded to a request for comment.

The lawsuit alleges four separate counts of discrimination, retaliation and privacy violations against NPS and seeks a minimum of $400,000 for each of them, in addition to fees for attorneys. The lawsuit said Schonzeit was blackballed by colleagues after her superiors let it be known that she had filed a complaint with the agency’s Equal Employment Opportunity office.

Weber said his client had exhausted all administrative remedies, with her EEO complaint denied in September by the agency’s Office of Civil Rights.

Schonzeit then had 90 days to file her suit after that decision, which prompted Weber to do so today, acting before a possible federal government shutdown that could affect U.S. court operations.

The complaint noted that Interior and NPS have long acknowledged a culture of sexual harassment. Last year, Zinke released an employee survey that found nearly 40 percent of the agency’s employees had experienced some form of harassment in the prior year.

"This is an issue that doesn’t just affect Chief Ranger Schonzeit," Weber said. "This affects every female park ranger in the United States government and we hope that they will come forward and report their experiences."