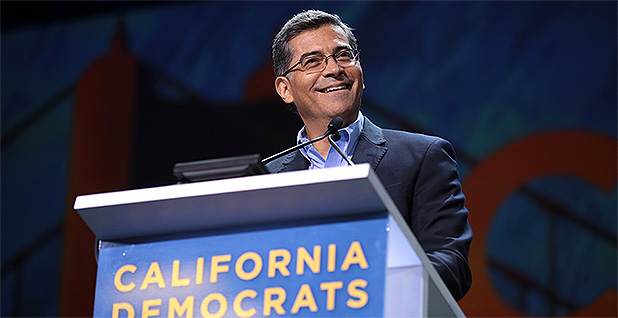 California is leading 24 states and municipalities in a new lawsuit opposing EPA’s decision to gut federal controls on the oil and gas industry’s methane emissions.

The coalition is suing over the federal agency’s recently altered New Source Performance Standards, which only control emissions of smog precursors called volatile organic compounds, or VOCs, in oil and gas production and processing facilities.

California Attorney General Xavier Becerra (D) called the decision to stop regulating the potent heat-trapping gas yet another example of the current administration ignoring the "dire reality of the climate crisis."

"The West is on fire, the South floods, the Midwest gets ripped apart by super-tornadoes, and the East prepares for calamitous hurricanes," Becerra said in a statement.

"At this critical juncture in history, we need leaders who step up and propose solutions," he continued. "Instead, we get President Trump’s version of the EPA. We won’t let the EPA gut critical pollution emissions standards and allow super pollutants like methane to destroy our atmosphere."

The coalition plans to argue to the U.S. Court of Appeals for the District of Columbia Circuit that the regulations violate the Clean Air Act by arbitrarily eliminating pollution controls from the transmission and storage segments, and by halting methane regulation without providing an adequate justification.

Together, production, processing, transmission and storage represent the largest source of industrial methane emissions in the United States, the coalition said.

EPA’s new standards reverse regulations finalized in 2016 that directed the industry to seek out and prevent methane leaks. The rules expanded on previous controls that had centered only on limiting VOC emissions.

The rules marked the first step toward tackling emissions from existing oil and gas sites, which make up the vast majority of emissions from the sector. The agency’s decision to ax direct regulation of methane means EPA is no longer obligated under the Clean Air Act to address releases of the greenhouse gas from those sources.

"EPA’s legal obligation to control methane pollution from the oil and gas industry is as clear as day, and we will not allow them to neglect their responsibility to guard against the increasingly devastating impacts of climate change," New York Attorney General Letitia James (D) wrote in a statement.

The state coalition also plans to file a separate lawsuit challenging EPA’s technical amendments to the Obama-era rules, which change leak detection and monitoring requirements. That rule has not yet been published in the Federal Register.