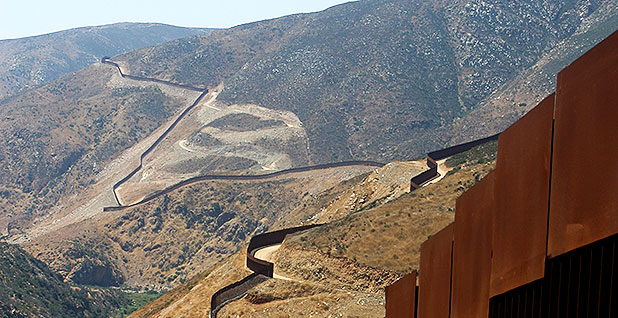 A lawsuit challenging environmental waivers for the U.S.-Mexico border wall could go to the Supreme Court. Scott Nichol/Sierra Club

A federal judge’s ruling late last month highlighted how difficult it is to challenge the federal government on border security activities.

Judge Gonzalo Curiel ruled that the Department of Homeland Security has broad authority to waive environmental and other laws for constructing President Trump’s proposed border wall. Trump is visiting border wall prototypes today in Southern California in the wake of the decision.

The lawsuit marked the latest unsuccessful attempt during the past decade to challenge waivers issued by the government for border wall construction.

At least one green group has vowed to appeal, but the future of any appeal is uncertain. Under a 2005 law, appeals are routed directly to the Supreme Court, which can decide not to take up the case.

The difficulty for greens stems from the Real ID Act. Congress passed the measure in 2005 as a legislative rider to an emergency supplemental appropriations bill to fund the wars in Iraq and Afghanistan and provide relief after the 2004 tsunami in Southeast Asia.

Under the act, which mostly dealt with drivers’ license and identification requirements, lawmakers dramatically expanded the government’s power to waive laws that get in the way of border protection projects. The act foreclosed review by federal appellate courts. DHS can invoke the authority to waive a wide variety of laws, including the National Environmental Policy Act, the Clean Water Act and the Endangered Species Act, that would otherwise apply to infrastructure projects.

At the time, Defenders of Wildlife and the Center for Biological Diversity protested the expansion of the waiver authority. Previously, Congress had only given the Department of Homeland Security the authority to waive laws for the construction of a 14-mile segment of border fencing near San Diego.

"The way that expansion was enacted was one of the worst examples of cravenly opportunistic legislating," said Brian Segee, a senior attorney at the Center for Biological Diversity who previously worked for Defenders.

Between 2005 and 2008, the George W. Bush administration invoked waivers five times. The waivers covered the barrier near San Diego and projects near the Barry M. Goldwater Range in Arizona, near a conservation area in Arizona, throughout a four-state area encompassing 470 miles, and in Hidalgo County, Texas.

"One of the many problems with essentially giving unlimited power to an agency to do away with laws, they will tend to pay less attention to those laws on a day-to-day basis," he said.

But while Judge Ellen Huvelle of the U.S. District Court for the District of Columbia initially agreed to grant greens a temporary restraining order halting work in the conservation area, she deferred to DHS once it formally waived the laws at issue under its Real ID Act authority.

The environmentalists asked the Supreme Court to take up the case, but the appeal died when justices declined review in 2008.

"It’s proving to be very difficult to persuade the federal district courts that there is a constitutional problem with delegating to the secretary of Homeland Security such a broad, unfettered authority," Dreher said. "I would have thought it would be easier to recognize what’s fundamentally un-American."

Deborah Sivas, director of Stanford Law School’s Environmental Law Clinic, said the issue with the Real ID Act is it gave broad authority to DHS but is "very narrow" in defining how parties can sue over decisions that invoke the law.

"The other thing that’s lurking in the background is courts being very reticent to intrude on this space that relates in some way to national security," she said.

Greens say President Trump’s bulldozing of environmental and other laws for border wall construction goes beyond anything in the Bush era.

Last August, DHS waived a "variety of environmental, natural resource and management laws" for a prototype border wall along a 15-mile segment of the border near San Diego. A month later, the department similarly waived laws for activities in Border Patrol’s El Centro sector.

While not part of the litigation, a third set of waivers announced in January applied to a 20-mile stretch of proposed border wall along New Mexico. DHS described the sector as an "area of high illegal entry."

The state of California and several environmental groups — the Center for Biological Diversity, Defenders of Wildlife, the Sierra Club, the California Coastal Commission and the Animal Legal Defense Fund — filed lawsuits. According to CBD, more than 90 endangered or threatened species, including the jaguar, would be threatened by border wall construction.

"The way that Congress has written this particular set of statutes — they want to give DHS a lot of free range," said Sivas, who filed an amicus brief in the consolidated suits on behalf of the Congressional Hispanic Caucus. "All of the plaintiffs in this case were trying to cabin that, so it wasn’t sort of unfettered discretion with very little judicial oversight."

But, as in the prior challenges to DHS over its waiver authority, Curiel last month wrote in his opinion in the consolidated suits that the DHS secretary "is granted broad discretion in determining how to ‘achieve and maintain operational control’ of the border."

"Plaintiffs have not identified ‘clear and mandatory’ statutory language that the Secretary violated," wrote Curiel, the Obama-appointed judge whom Trump derided as a "Mexican" and a "hater" during the presidential campaign (Greenwire, Feb. 28).

To the Supreme Court?

At least the Center for Biological Diversity says it plans to petition the Supreme Court to take up the case.

Dreher said that Defenders has not yet made a decision about a potential appeal but said that, "ultimately, this ought to be a case that the Supreme Court should decide." California is also considering its options for appeal.

Any appeal to the Supreme Court would likely focus on constitutional issues and whether the Real ID Act waiver authority is illegal because it raises concerns over separation of powers.

"The court is mostly interested in constitutional cases. I think that’s likely where the focus will be," Sivas said.

But one of the plaintiffs’ main arguments in the Curiel case has also been that DHS’s invocation of waivers is outside the scope of its authority, a legal argument known as "ultra vires." Segee argues Congress only meant for DHS to use the waiver for projects it had specifically written into law.

The Bush-era waivers pertained to the San Diego project that had long been under construction and other projects that Congress wrote into the 2006 Secure Fence Act.

"Congress never talked about that waiver applying to any area of the U.S. border or of providing the DHS secretary with that authority in perpetuity," Segee said. "DHS, according to its own statements, has long ago met its mandates under the Secure Fence Act."

While groups are hopeful that the Supreme Court will step in, Robert Uram, a San Francisco-based attorney at Sheppard Mullin, predicted it is "more likely than not that litigation will be unable to block waivers."

In a blog post for the American College of Environmental Lawyers, he wrote that only Congress — not the courts — would be able to rein in DHS’s waiver authority.

"A responsible Congress would address this issue decisively and head on," Uram wrote. "If the waiver remains on the books, it will not only lead to harm to border communities and the environment, it will also be a precedent to excuse compliance with other laws for other reasons."