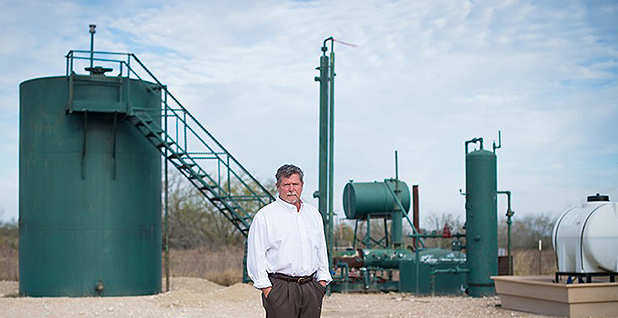 A Texas businessman who’s running for a powerful job as one of the state’s oil and gas regulators has been bogged down in legal and environmental disputes at an oil field waste business that he founded.

Jim Wright, the Republican candidate for the Texas Railroad Commission, said he’s not responsible for the environmental problems at the site, which happened after he sold the business six years ago. He said his Democratic opponent is exaggerating the case for political gain, and the episode shows the need to reform the Railroad Commission.

"That’s one of the things that led me to run for this office," he said in an interview. "If the Railroad Commission had been doing their job, they’d have never let those guys get in that shape."

State records show Wright paid a $181,500 fine to the Railroad Commission to settle environmental problems related to the company, DeWitt Recyclable Products. And Wright is still facing lawsuits from companies that claim they are owed money and that Wright improperly transferred ownership of DeWitt’s assets to avoid paying.

"The voters that hear about it are turned off by Wright’s history," said Chrysta Castañeda, the Democrat running against Wright for the seat.

Wright said the new owners failed to file the paperwork with the Railroad Commission to list themselves as DeWitt’s registered agents. That left him financially responsible for the problems at the site, according to the commission’s regulations.

Wright said he spent $1.5 million of his own funds on the cleanup and paid the fines to settle DeWitt’s environmental problems. He said DeWitt’s owners also left him and other investors in the lurch. Working with some of those investors, he formed a new company, Eagleford Recycling Services, to take over the site in hopes of recovering their money.

Wright’s campaign furnished a letter from one of the investors, Jose Pujols of Coral Gables, Fla., who blamed the problems on DeWitt’s previous owners.

"I just don’t know anything Jim could have possibly done wrong or any better," Pujols said.

Wright and Eagleford Recycling sued two companies that supplied equipment to DeWitt, accusing them of trespass for failing to remove storage tanks from DeWitt’s site.

The vendors say Wright is trying to avoid responsibility for a legal debt. One of the suits, by McAda Drilling Fluids, says Wright improperly took control of DeWitt’s assets, without giving other companies a chance to collect what DeWitt owed them. McAda also said Wright improperly collected an $800,000 cleanup bond that DeWitt had posted with the Railroad Commission — money that could have gone to McAda or others involved with DeWitt.

Wright’s legal problems weren’t widely known when he beat the incumbent commissioner, Ryan Sitton, in the March 3 Republican primary election. He had raised only a few thousand dollars and did minimal campaigning ahead of the primary (Energywire, March 5).

Whoever wins, it’s likely that Wright’s court cases will continue after the November election.

Wright said he expects to win the suits at trial. While he acquired DeWitt’s assets when he foreclosed on the company, he said that doesn’t make him responsible for the company’s debts.

"Why would I pay their bills when I didn’t create those?" he said.