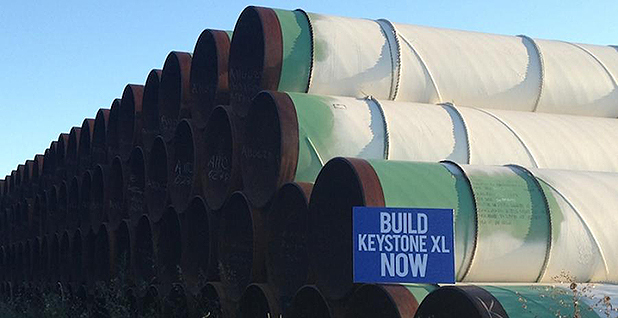 TC Energy Corp., formerly TransCanada Corp., has started pre-construction work ahead of its plans to begin building a 1.2-mile stretch of the Keystone XL pipeline across the U.S.-Canada border. Sean Hackbarth/U.S. Chamber of Commerce

As a Canadian oil firm prepares to build its embattled Keystone XL pipeline across the U.S. border, legal experts say the company could use the project’s construction status to protect it against an onslaught of ongoing litigation.

The 1,200-mile pipeline will connect Canada’s oil sands to ports and refineries along the Gulf of Mexico. So far, it’s unclear whether concerns about the spread of the novel coronavirus will have any impact on TC Energy’s timeline. The company said in a release today it would make "every consideration" for the health and safety of its workers and the surrounding communities before beginning construction.

"The presumption is the further you get along, the less likely it is for the court to dig it up," said James Coleman, an associate law professor at Southern Methodist University.

The strategy parallels the approach taken by developers of the Dakota Access pipeline.

Elizabeth Kronk Warner, dean of the S.J. Quinney College of Law at the University of Utah, said that even as Energy Transfer Partners LP faced lawsuits over its crude oil pipeline, the company worked quickly to get all its pre-construction work done in preparation for building the project. As soon as ETP got a window to build Dakota Access, the company moved ahead and got crude oil flowing in a matter of months.

When a federal court found in 2017 that the government violated the National Environmental Policy Act in a review supporting a permit for the pipeline, the court declined to halt operation of Dakota Access because the project was already in service.

"If I were an energy executive, I would have learned to get everything that you can get done, and if you get your window, jump," Warner said.

"They are not going to enjoin when oil is actually flowing," she said.

A federal court recently required Dakota Access developers to conduct a more in-depth environmental analysis for the pipeline and asked parties in the case to weigh in on whether the project should be allowed to operate while the Army Corps carries out that review.

Judge Brian Morris for the U.S. District Court for the District of Montana has already brought Keystone XL construction to a halt once. He handed down an injunction against the project in late 2018 after finding that the State Department failed to conduct an adequate NEPA analysis to support the border-crossing permit.

Morris, an Obama appointee, declined to issue a second injunction after the Trump administration replaced the State Department approval with an executive order authorizing the crossing. But the judge said he would allow a legal challenge to the presidential permit to move forward in court (Energywire, Dec. 23, 2019).

"It’s possibly a little more worrisome," Coleman said. "In a normal case, you want to do as much building as you can before a judge makes a decision.

"In this case, it’s more complicated because the judge thinks there is some merit to the plaintiffs’ arguments."

While TC Energy had begun clearing trees to make way for Keystone XL, the company appeared hesitant to fully invest in the project.

In its quarterly earnings call last month, TC Energy noted that it had secured nearly all of the land it needed in Canada and the United States to build the pipeline.

At the same time, TC Energy Executive Vice President Paul Miller said on the call that the company still needed a water permit from the U.S. Army Corps of Engineers and for litigation over the president’s border-crossing permit to be "behind us" before the company could move forward with a final investment decision.

She described TC Energy’s actions as "testing the waters" on whether the project will face more pushback. Tezak added that challengers in Morris’ court could renew their call for a block on the project once the company begins pre-construction activity.

"Absent a [final investment decision], we don’t consider TC Energy ‘all in’ on the project," Tezak wrote in an email. "But moving forward with preconstruction activities indicates to us optimism that the litigation will end favorably for the pipeline.

"However," she said, "if opponents renew their request for injunction — and get it — then we would take that as an indicator that the appeals have a good chance of succeeding and stalling the project again," she wrote.

Today, however, the company announced it had made its final investment decision (FID) in the project, after securing financial backing in the form of equity support and loan guarantees from the Canadian government.

"Taking FID does not eliminate the risk of an injunction or a cessation of construction, in our view," said Tezak in response to TC Energy’s announcement.

Earlier this month, one of the tribal groups involved in the border permit challenge filed for a temporary restraining order to halt all pre-construction and construction work on the project pending court orders on requests for preliminary injunction and summary judgment.

The Rosebud Sioux Tribe and Fort Belknap Indian Community warned that TC Energy could complete key segments of the project before their mid-April hearing date.

"The extraordinary circumstances surrounding this case and the immediate and irreparable injuries threatened by the construction of KXL necessitate this extraordinary remedy," the tribes wrote.

Keystone XL also faces legal challenges from the Sierra Club and other environmental groups that say the Army Corps improperly approved the pipeline’s crossing of numerous wetlands and waterways.

Unlike the battle over the project’s border-crossing permit, which zeroes in on a 1.2-mile section of Keystone XL, the water permitting lawsuit centers on the pipeline as a whole.

Instead of requiring the entire project to get a Clean Water Act Section 404 permit, which covers the release of dredged materials into a federally protected waterway, the Army Corps allowed TC Energy to obtain hundreds of permits under the agency’s Nationwide Permit 12, which is designed for projects affecting at most a half-acre of protected federal waters.

"In other words, for Keystone, they treat this massive pipeline as 1,200 single and complete projects that each qualify under this half-acre nationwide permit," said Sierra Club senior attorney Doug Hayes.

"There is not public notice or comment, or any process whatsoever when a project is approved under Nationwide Permit 12, so it’s all done behind closed doors," he said.

Morris, who also presides over the case, is currently considering arguments from a motion hearing held at the beginning of the month.

The repeated use of the nationwide permit along segments of Keystone XL has diluted the stringency of the Army Corps’ analysis of the water crossings, Hayes said.

Hayes said that in the case of Keystone XL, the Army Corps’ decision to allow the use of the nationwide permit meant the agency didn’t require an analysis of the potential effects of oil spills or cumulative impacts to species.

"Really it’s more appropriate for projects on this scale to use the normal individual 404 permit at the outset that requires a public, transparent process," Hayes said.

Environmental groups are hoping Morris will prevent TC Energy from using the nationwide permit, but they aren’t seeking to undo the permits altogether.

While the judge could decide to ban the use of nationwide permits for the project, he could also instruct the Army Corps to adjust its program and allow TC Energy to seek use of the revised permits instead.

Morris is also slated to hear arguments next month from two sets of challengers with overlapping claims opposing President Trump’s 2019 authorization for Keystone XL to cross the northern border.

In one lawsuit, the Indigenous Environmental Network and North Coast Rivers Alliance contend that the president’s approval of the border crossing effectively greenlights the entire project and poses spill threats to tribal communities living along the pipeline’s route.

They note that even a spill at the U.S.-Canada border could flow downstream and eventually reach the Missouri River, contaminating potable water for the Fort Peck Indian Reservation.

"President Trump completely removed the State Department and other federal agencies from considering cross-border permit applications when he issued the 2019 Permit," the groups wrote in a court filing.

In a subsequent brief filed this week, the Interior Department called the challenge a "demonstrably inaccurate narrative." It maintains the permit is only in effect for the border-crossing segment of the pipeline and said the challengers failed to demonstrate actual harm linked to the activity authorized by the permit.

"Rather than show a genuine nexus, Plaintiffs ask the Court to hypothesize that pollution from the construction of the pipeline at a water crossing on State lands at the border crossing will affect an ‘unnamed tributary’ and then will traverse at least five bodies of water before reaching where Plaintiffs live and recreate," the government argued.

The Rosebud Sioux Tribe and Fort Belknap Indian Community have also filed their own lawsuit opposing Keystone XL. They argue that Trump’s action sidestepped the State Department review and violated both the Constitution and executive orders by past administrations.

Trump’s White House has contended that it is not bound by past administrations’ executive orders, but the challengers argue that the directives at issue in the Keystone XL lawsuit had not been withdrawn at the time the president issued the border-crossing permit.

Morris is scheduled to hear arguments in the case April 16.