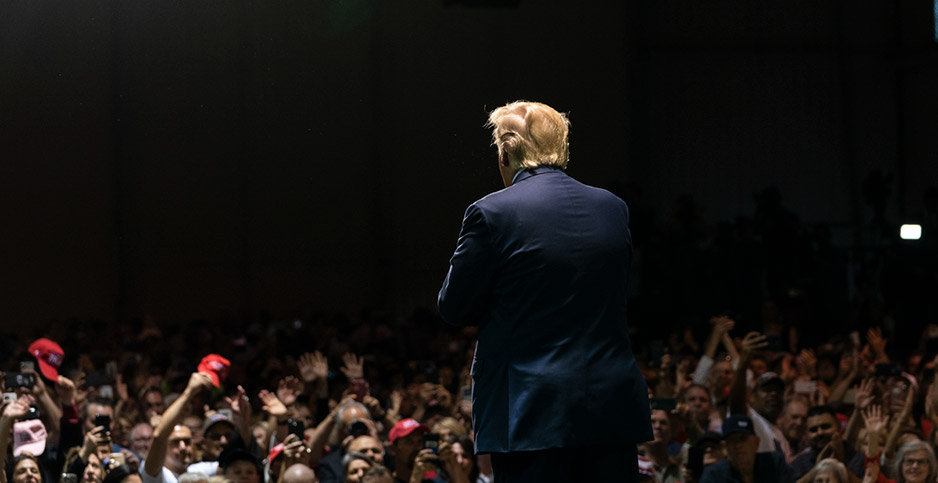 Legal challenges and fierce politicking lie ahead for the farmer-friendly California water moves celebrated with a flourish yesterday by President Trump and his Interior Department team.

In a midafternoon event that festooned an administrative procedure with the trappings of a campaign rally, Trump capped a "record of decision" intended to steer more irrigation water to San Joaquin Valley farmers.

But even before the applause faded in a hangar near Bakersfield’s Meadows Field Airport, the resistance stiffened elsewhere.

The state’s Democratic governor, Gavin Newsom, added in a statement that "we will file legal action in the coming days to challenge the federal biological opinions to protect highly imperiled fish species close to extinction."

Trump inaccurately called what he signed a "piece of legislation." Rather, it was a "presidential memorandum" that accompanied a record of decision finalizing biological opinions that govern water project operations.

The increase in irrigation water deliveries will vary, depending on conditions each year.

The additional deliveries would be made possible, in part, by flexible pumping rules tied to monitoring and "real-time management," so that water exports can increase when endangered fish aren’t at risk.

"Using adaptive management, science and observed realities on the ground, rather than arbitrary calendar dates to determine water operations, is the right thing to do, especially in light of California’s changing climate," said Rep. Jim Costa (D-Calif.).

Blending water-related riffs with political shots against Democrats, shoutouts to GOP lawmakers and candidates, denunciations of the "impeachment hoax," and a characterization of San Francisco as "worse than a slum," Trump repeated his refrain about California wasting "millions and millions of gallons" of water that flows into the Pacific Ocean.

"We’re determined to get your problem solved; the state’s not doing anything to help," Trump said from a stage populated by teenage 4-H members, adding that what others are "doing to the state is a disgrace."

The beneficiaries of the administration’s action include farmers in the 600,000-acre Westlands Water District.

While in private practice, Interior Secretary David Bernhardt was a registered lobbyist for Westlands with a focus on the Bureau of Reclamation, the Endangered Species Act and appropriations. Bernhardt also represented Westlands in a lawsuit challenging endangered species protections that limited water supplies.

Under his ethics pledge signed Aug. 10, 2017, Bernhardt committed not to participate in any "particular matter" on which he lobbied within the two years preceding his Interior appointment. That period has since expired, and he’s spent several days this week in California (E&E News PM, Feb. 28, 2019).

"The Trump administration has essentially decided to distribute California’s limited water to benefit its wealthy, well-connected friends," said Kathryn Phillips, director of the Sierra Club’s California chapter, adding that "livelihoods and futures are being devalued by Trump and Bernhardt for political gain."

The massive engineering has also undermined vulnerable species, including some protected by the Endangered Species Act.

"Since settlement of the Central Valley in the mid-1800s, it is no exaggeration to state that human alteration of fish habitats has resulted in dramatic declines in populations of delta smelt, Chinook salmon, steelhead and sturgeon," NOAA Fisheries’ biological opinion said.

About 95% of freshwater wetland habitat has been lost, and dams block access to more than 80% of historical salmonid spawning areas, according to NOAA Fisheries.

Along with the Fish and Wildlife Service, NOAA Fisheries worked with the Bureau of Reclamation on a package of management improvements that also include increased Shasta Reservoir storage and cold water pool to benefit winter-run chinook salmon and improved temperature management strategies on the Sacramento, American and Stanislaus rivers.

"Reclamation’s sound, scientifically-based approach should benefit both ecosystem needs and water supply, including commitments to ESA compliance actions to meet the needs of threatened and endangered species," the record of decision states.

The agencies further predict that these measures entail an estimated $1.5 billion expenditure over 10 years, with an anticipated $15 million annually for real-time monitoring.

At a higher level of generality, the memorandum signed by Trump yesterday directed the Interior and Commerce departments to "make deliveries of water more reliable and bountiful" and report quarterly to the Council on Environmental Quality regarding progress.