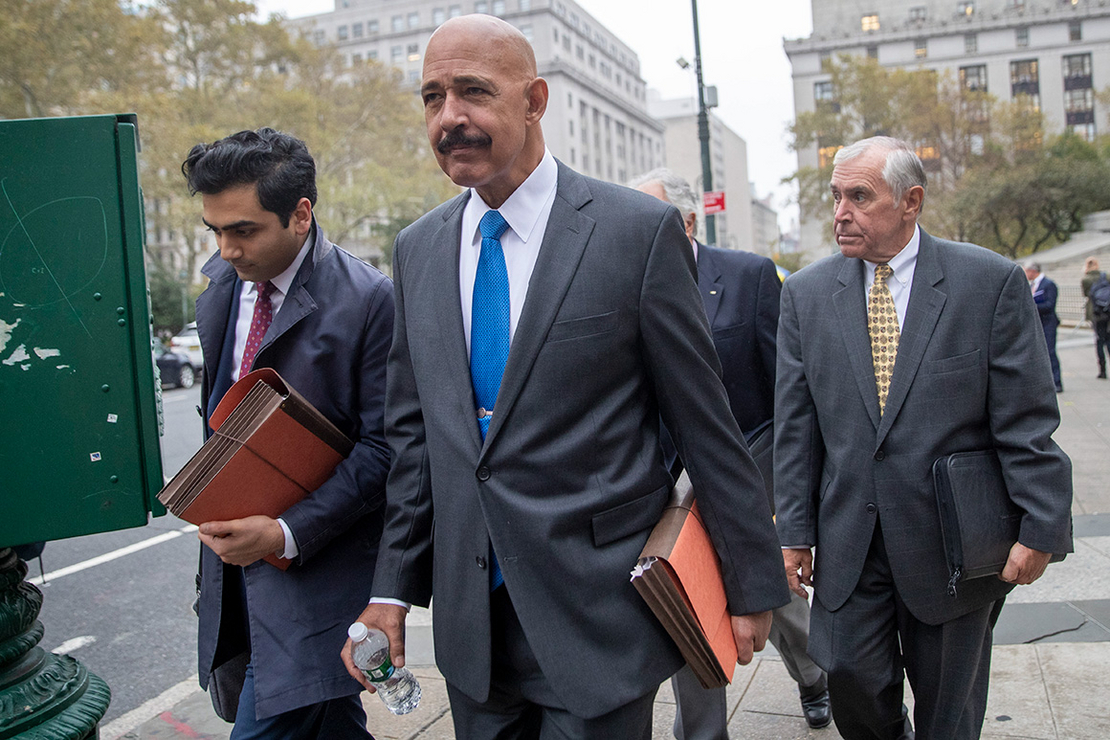 Two years ago, Exxon Mobil Corp. took to Twitter to promote its research into algae biofuel.

The oil giant tweeted a photo of swirling beakers of bright green liquid to its hundreds of thousands of followers. “We’re researching algae biofuel with about 40% of its mass as fat, which can be turned into fuel. The swish is just a nice bonus. #SoothingScience,” the caption read.

The response was scathing.

“Swishing green liquid is literally reminiscent of greenwashing, which is also what this ad is doing,” wrote a Twitter user with the handle “decommodify survival.”

The incident was indicative of a larger legal trend. As Exxon tries to portray itself as a leader on climate change on social media, the company is coming under increasing scrutiny in court.

From Twitter to Instagram, the oil giant’s posts have been cited in recent lawsuits brought by state and local governments seeking fossil fuel industry compensation for the local impacts of global warming.

It’s a notable change from even a few years ago, when most climate liability lawsuits cited Exxon’s full-page advertorials in The New York Times as examples of deceptive marketing to consumers.

“Exxon in particular has used public relations and advertising as a way of driving public perception. So it makes sense that the new way to do that is social media, just as putting an ad in the op-ed page of The New York Times seemed like the thing to do in the 1980s,” said Sean Hecht, co-executive director of the Emmett Institute on Climate Change and the Environment at UCLA School of Law.

“But clearly these lawsuits are something for these companies to be concerned about,” Hecht said. “When they put out claims that people view as misleading, it does provide more of a factual basis for some of the lawsuits that have been brought.”

Since 2017, five states and more than a dozen municipalities have sued fossil fuel companies over their contribution to — and alleged deception about — the dangers of global warming.

The suits ask a slew of oil supermajors — including Exxon, BP PLC and Chevron Corp. — to help cover the costs of addressing hurricanes, wildfires and other disasters fueled by rising global temperatures.

Some of the more recent cases single out Exxon’s social media posts as examples of “green washing,” or the practice of making a company seem more sustainable than it really is.

Take the lawsuit filed by New York City Mayor Bill de Blasio, a Democrat, on Earth Day. The complaint targets Exxon for bragging on Instagram about its commitment to capturing carbon dioxide, a potent planet-warming gas.

“In a November 2020 Instagram post, ExxonMobil boasted that, ‘over the last 40 years, we have cumulatively captured the most CO2 of any company,'” New York City’s suit reads. “The ad omitted that during that same period of time, ExxonMobil’s operations and the use of its fossil fuel products have been one of the single largest sources of greenhouse gas emissions emitted into the earth’s atmosphere.”

Asked for comment, Hilary Meltzer, chief of the Environmental Law Division of the New York City Law Department, said in an email to E&E News: “When fossil fuel companies run ads telling New York City consumers and residents about their commitment to clean energy, but then tell their investors that they plan to substantially increase fossil fuel production over 10, 20, or 30 years, that’s greenwashing. That kind of behavior violates New York City’s Consumer Protection Law, and that’s why we’re asking the court to hold these companies accountable.”

While Exxon has taken to Instagram to tout its leadership on carbon capture and storage, the process isn’t yet commercially feasible.

“They’re entirely misrepresenting the technology,” she said. “They’re framing this as a clean technology when it’s actually further perpetuating harms and likely to accelerate the climate crisis.”

But Benjamin Zycher, a senior fellow at the American Enterprise Institute, a conservative think tank, said he thinks New York City officials are punishing Exxon for speech on social media that is protected by the First Amendment.

“The Supreme Court has ruled in effect that individuals do not lose their First Amendment free speech rights merely because they have peaceably assembled into a corporation,” he said. “You know, corporations are people. They’re aggregations of investors and workers and all the rest.”

Exxon has donated more than $4 million to the American Enterprise Institute, some of whose scholars reject scientific consensus on climate change, according to data compiled by DeSmog.

The green washing claims are “without merit and we look forward to defending the company in court,” said Exxon spokesperson Casey Norton in an email to E&E News.

“We provide our customers, employees and stakeholders with factual, relevant information through a variety of communications, including social media,” Norton said.

In her suit, which she amended last year, Healey criticized Exxon for boasting on Instagram about its research into algae as a potential biofuel.

Such posts “mislead Massachusetts consumers by falsely representing that ExxonMobil is a leader in developing clean energy, such as algae biofuels, when ExxonMobil is increasing its production of fossil fuels, spends very little on clean energy research and development, and is opposing efforts to reduce emissions,” the complaint reads.

In addition to Instagram, the complaint notes that the oil supermajor has posted about climate change on “Twitter, Facebook and LinkedIn, where ExxonMobil has millions of social media followers and its content has received hundreds of thousands of ‘likes’ and ‘views.'”

Asked for comment, Healey said in an emailed statement to E&E News: “Exxon Mobil’s social media and other marketing campaigns target consumers with false messaging about environmental stewardship, cutting-edge clean energy research and climate leadership — when in reality Exxon is ramping up its fossil fuel production and convincing Massachusetts consumers to purchase products that contribute to catastrophic climate change. These tactics are intentional, harmful, and a major reason why our office wants to put a stop to Exxon’s ongoing deception.”

Exxon is the only major oil company studying algae as a potential source of biofuels. But after more than a decade of research, serious questions remain about the technology’s viability (Climatewire, Nov. 2, 2020).

At oral arguments in the Massachusetts case in March, a lawyer for Exxon rejected the notion that the ads for algae research constituted green washing.

“Anyone can pull down public records, including [Securities and Exchange Commission] filings, or look at what the company has told the public about its continued, ongoing investment in developing fossil fuels,” Anderson said.

From 1974 to 1999, Exxon and Mobil paid for full-page advertorials in The New York Times every Thursday. The trend continued after the two companies merged in 1999 to form Exxon Mobil, one of the world’s largest publicly traded oil companies.

In 2000, for example, an Exxon Mobil advertorial titled “Unsettled Science” sought to portray climate science as full of uncertainties, despite the company’s own scientists confirming the perils of global warming in the 1970s.

The advertorials stopped appearing in the Times in 2004, even as the oil company ramped up its social media outreach. It was a similar story at major tobacco manufacturers, which transitioned from ads about smoking cigarettes in print publications to ads about vaping on social media, which reaches a younger audience, said Sokol, the Loyola law professor.

“It evolved over time and got much snazzier. Vaping is all over social media now,” Sokol said. “And there’s really no difference when you’re trying to convince your next consumer base that it’s okay to use a highly dangerous product.”

She added: “It used to be full-page ads in the Times, but soon those [readers] are not gonna be around anymore. So [Exxon is] looking to maintain their social license to operate, even in the face of what looks to be a consumer base that isn’t going to put up with their misrepresentations.”

In the 1990s, attorneys general from all 50 states sued the largest U.S. tobacco companies over their alleged deception about the harmful health effects of smoking cigarettes and the addictive nature of nicotine. The suits culminated in a $206 billion master settlement agreement in 1998 (Climatewire, March 10).

It may be years before the courts get to the question of whether companies like Exxon have misled the public on climate.

Exxon is hardly the only oil company that has landed in hot water for promoting alleged misinformation about global warming on social media.

BP, Chevron and Royal Dutch Shell PLC have all trumpeted their commitments to combating climate change on multiple social media platforms, as well as through sponsored content in numerous publications. (Chevron has sponsored POLITICO’s Energy podcast; E&E News is owned by POLITICO.)

Catherine Higham, coordinator of the Climate Change Laws of the World project at the London School of Economics and Political Science, said fossil fuel companies can shield themselves from future litigation by adding more context to their social media posts about climate.

“If a company is very clear and very honest in the terminology that it uses and sets out quite transparently the extent of its contributions to emissions, then I would say their litigation risk would be radically reduced,” Higham said. “Obviously that would be challenging in social media posts, but there would be ways to do it.”

“The disinformation that these companies put out in the ’80s and ’90s was most significant in shaping our energy path,” Hecht said. “That was when there was an opportunity for us to take a different path.”

UCLA’s Environmental Law Clinic has previously provided legal research assistance to Sher Edling LLP, the California-based law firm representing many of the challengers in the climate liability litigation, including New York City. Neither the Clinic nor Hecht currently does so.

That changed on Tuesday, when Exxon resurfaced with a post about polymers, or chains of molecules that can be used to make plastic medical products such as face masks and surgical gowns.

The responses ranged from heart emojis to heated retorts.

“Stop greenwashing and concentrated efforts to delay action regarding climate change!” said a user with the Instagram handle “drawnentity.”