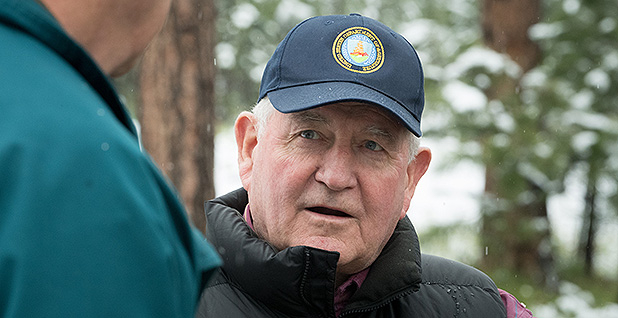 The Trump administration is considering several moves to boost the ethanol industry, including rescinding some of the biofuel mandate waivers it recently granted to small petroleum refineries, Agriculture Secretary Sonny Perdue told President Trump in a memo obtained by E&E News.

Perdue wrote to the president Tuesday, a day after an Oval Office meeting in which key officials discussed the renewable fuel standard and the administration’s efforts to balance the interests of the ethanol and petroleum industries and to respond to economic troubles in farm country.

In the memo, Perdue — who’s supported the biofuel program as important to corn farmers — outlined several ideas that he said were discussed at the meeting and later agreed on in a phone call by him, EPA Administrator Andrew Wheeler, Energy Secretary Rick Perry and Ambassador to China Terry Brandstad.

Brandstad’s involvement signals concerns about the effects of Trump’s trade battles with China, which have resulted in tariffs on U.S. agricultural goods. Farm groups say a friendlier approach to biofuels could counteract the negative effects of trade policies.

In the memo, Perdue said he, Brandstad, Perry and Wheeler agreed in their call that the administration should consider rescinding seven or eight of the refinery exemptions it granted earlier this month, with a focus on large, profitable companies that received them.

But an oil industry source told E&E News that the administration appears unlikely to rescind exemptions that have already been approved and that the situation remains fluid. Initially, industry groups said they expected another policy announcement today.

In addition, Perdue apologized to Trump for not reaching out when it became clear EPA was going to approve 31 refineries’ petitions for exemptions, a number that ethanol advocates say undercuts demand for biofuel and contradicts Trump’s stated support for farmers.

News reports have suggested the White House was caught off guard by the level of criticism from farm groups and the biofuel industry after EPA’s announcement.

"I regret not calling you personally after I learned that EPA was moving forward with such a large number and volume of small refinery waivers to inform you about what a negative impact this action would have on farmers and biofuel industry," Perdue said.

The secretary’s office didn’t immediately respond to a request for comment this morning.

Other ideas under consideration include expediting the availability of higher-ethanol fuel called E15 at gas stations that don’t already offer it. That would follow up on the administration’s agreement to allow E15 sales year-round, lifting summer restrictions.

Officials also agreed that the administration should take action to encourage flex-fuel vehicles that take fuel up to 85% ethanol, and that EPA and the Agriculture Department should discuss ways to "fix" problems with the RFS program that work to the disadvantage of biofuels, according to the memo.

Ethanol and biodiesel groups have sharply criticized EPA for granting the small refinery exemptions, while the American Petroleum Institute and refiners say the RFS as a whole should be repealed or restructured.

Although the RFS is sold politically as helping farmers, it doesn’t do much for them and is instead a boon for the ethanol lobby, an oil industry source told E&E News today. The administration’s announcements go back and forth between benefiting one side of the debate or the other and don’t seem to reflect a coherent policy, the source said.

"It has been kind of swinging back and forth from one policy to an almost totally conflicting policy, sometimes in a matter of hours," the source said.