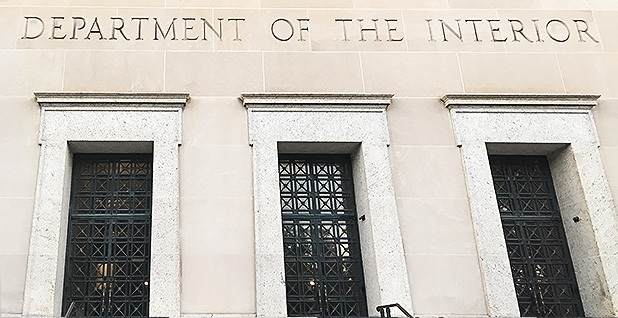 Development on public lands will play a key role in allowing America to "achieve and maintain" energy dominance, according to a leaked draft of the Interior Department’s fiscal 2018-22 strategic plan.

The high-level document obtained by E&E News lays out the goals, strategies and guiding principles for the 10 bureaus and 70,000-odd employees at the sprawling agency.

The plan, first reported by The Nation, lays out six "mission areas," or focal points. The first is to conserve land and water in a science-based and partnership-oriented way. The second is to use natural resources managed by Interior to generate revenue for the American people.

The document also lays out plans to expand access to public lands and outdoor recreation, fulfill trust responsibilities to the Native American tribes and U.S. territories under its jurisdiction, protect Interior employees and the U.S. border, and take a 100-year view toward agency organization and infrastructure updates.

While many of the graphics and layout of the draft document mirror the current strategic plan, which covers fiscal 2014-18, there are some major differences.

The sharpest break is on Interior’s policy toward acknowledging and dealing with the threat of climate change. None of the objectives touches on the impacts of a changing climate on public lands or the agency’s role in adapting to them. "Climate change" appeared 46 times in the previous strategic plan. It does not appear in the new draft.

"They don’t even mention climate change, and while they discuss adaptation, they don’t mention what they are adapting TO," Joel Clement, Interior’s former leading official working on climate change, who resigned earlier this month after being reassigned, wrote in an email. "This is an Alice in Wonderland strategy, a complete embarrassment to agency leadership."

The draft strategic plan also spells out a series of "guiding principles," overarching themes to guide the actions undertaken by agency. In the next five years, Interior Secretary Ryan Zinke envisions an Interior whose workforce is empowered and has "effective and accountable leadership" from the top down.

Mirroring language Zinke has often repeated in speeches and congressional testimony, the plan also calls for the restoration of trust between the department and American people. Interior is also committed to striking a regulatory balance in accordance with President Trump’s February regulatory reform executive order and will ensure the nation’s public lands and offshore waters "are managed wisely and made accessible for public use to help generate revenues and grow the U.S. economy."

The document, which is marked with "Draft (9/27/17)" in bright red text, appears to be just that. Under the "letter from the secretary" section, a headshot of Zinke sits next to text that reads "Letter will be included in the December, 2017, submission."

Interior press secretary Heather Swift said in an email she was "unaware of their supposed ‘leaked draft’" and did not respond to a request to verify its authenticity.