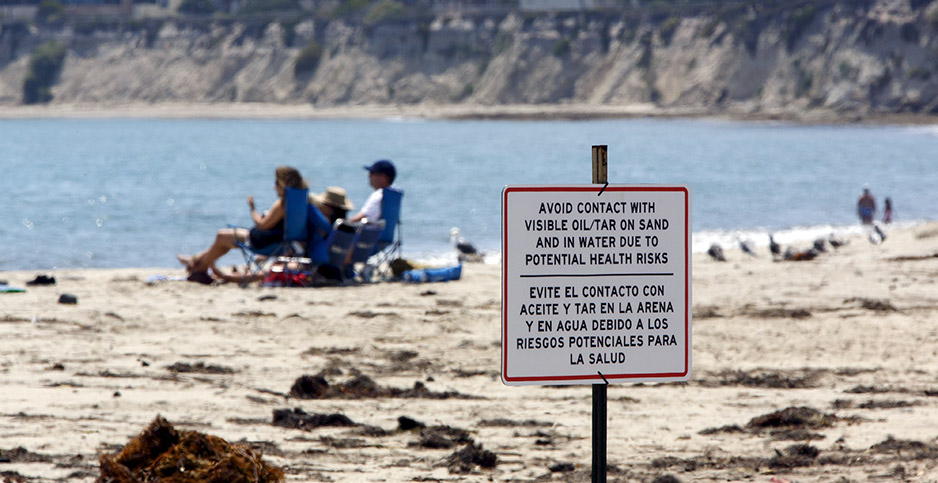 Drillers punched hundreds of shallow wells in the California seafloor off Santa Barbara County at the turn of the 20th century — only to abandon them in the early 1900s.

In those days, plugging wells meant throwing rocks in the hole.

But the oil has lingered. It leaks from the orphaned wells and seeps from the ocean floor naturally off the Santa Barbara coast — the second-largest natural seep in the world. It leaves tar on the beach and a sheen on the waters.

Environmentalists worry about damage to the ecosystem and threats to public health on a beach that smells of motor oil and produces wave spumes the color of a latte.

"It can make people sick, both in the short term — like the headache I get about three minutes after I get down there — and in the long term because petroleum products are carcinogens," said Lee Heller, a local environmental activist and former director of the Santa Barbara-based Environmental Defense Center.

More than a hundred years after those wells were first drilled off Summerland Beach, the state is trying to replug them to staunch the bleeding crude.

The California State Lands Commission identified 200 "high priority" offshore orphaned wells in a report last year that, with the right conditions, could "leak oil into the marine environment, negatively impacting swimmers, surfers, recreational users, and marine and coastal wildlife and fish and their habitats, as well as causing environmental degradation and public health and safety hazards."

The work comes at a pivotal point in Santa Barbara’s oily history. Advocates and politicians who have worked to get those wells plugged would prefer that all offshore oil development — represented by steel platforms visible from shore on a sunny day — be safely decommissioned with the orphans in the surf.

They see industry as a bad actor, itself a relic of the past. Those old enough remember the infamous Santa Barbara oil spill of 1969 — the third-largest oil spill in U.S. history. But there was a reprise of oil’s risks in 2015, when Plains All American Pipeline’s "901" line ruptured and oil cascaded down to Refugio State Beach, just up the coast from Summerland.

"We know that the oil industry has not been good stewards and that the very nature of the industry is such that it is all very problematic," said state Sen. Hannah-Beth Jackson (D). Jackson pushed through legislation that sets up a funding stream of $2 million a year for 10 years to take inventory of the orphaned wells, plug them when they are leaking, and clean up jetties and piers.

"We need to wean ourselves as quickly as possible off this cyclical, polluting, climate-destroying energy system," she said.

California has one of the most ambitious clean energy goals in the country. The state is already beyond its 2020 milestone of reducing greenhouse gas emissions to 1990 levels. It must bring its emissions down an additional 80% by 2050 to meet its goals.

California’s oil production peaked in the 1980s, but it’s still the fourth-largest producing state in the country and a serious importer.

In Santa Barbara, a place known for idyllic beauty and wealth, producers aren’t likely done with offshore oil. About 40,000 barrels of offshore production per day have been shut down since the pipeline rupture in 2015, but if the Plains’ "901" pipeline is repaired or rebuilt, that oil returns.

Some believe industry has that right.

"They have the right to pump that resource until it’s gone, and you cannot take that away," said Cory Bantilan, chief of staff for Santa Barbara County Supervisor Steve Lavagnino, of existing mineral and drilling rights.

Bantilan said industry must be held accountable for cleanup and responsible operations, but he said there’s a disconnect between the desire to get rid of the oil industry and an ongoing dependence on oil.

It’s a conflict visible in the people who show up to anti-oil meetings in Santa Barbara driving a pickup truck, he said.

"Oil will go away in Santa Barbara County as soon as people stop using [it]," he said.

People who grow up in Santa Barbara know how to get oil off their skin. Locals say the Chumash people, Native Americans of the central and south-central coast, used tar collected on the beach as pitch to seal their boats.

For a long time, locals were certain the oil in the water and on the beach was largely natural.

"People go in the water either oblivious or indifferent," Heller said.

But in addition to the natural release of oil, there are leaking oil wells that nobody owns — the legacy wells left over by turn-of-the-century wildcatters, the oil and gas pioneers that drilled in unproven areas searching for oil.

Heller credited environmental groups — and a leaking well close to shore — for slowly convincing people that the natural story wasn’t the only one.

Then, Refugio Beach, north of Summerland, was damaged by the rupture of an inland pipeline that carried offshore oil to processing. The oil, estimated at 100,000 gallons, navigated down to the ocean, coating and killing wildlife and polluting four state marine conservation areas.

The production shutdown — four out of seven platforms were unlikely to produce again — was too great a stress on some producers.

When oil company Venoco Inc. declared bankruptcy as a result of losing its ability to produce offshore in 2017, it tried to walk away from its offshore platform Holly, with just $22 million in bonding, according to reporting in the Santa Barbara Independent. That was a fraction of the cost to plug wells and take down steel.

For a time, it looked like the taxpayers could be on the hook, but Exxon Mobil Corp., which sold the Holly platform to Venoco in 1997, will pay an estimated $350 million to decommission it and plug dozens of associated wells, according to the Independent. The cleanup will be a cost share between Exxon and California.

The spill and its aftermath lit a fire in local activism and inspired Jackson’s legislation to create and fund an orphan well program.

But if the cost of plugging one offshore well last year — about $1.2 million — is any measure, the funding falls short, experts say.

"We are trying to plug three right now," said Walter Scott, a petroleum production engineer with the California State Lands Commission leading the inventory process for the legacy well project. "I’m not sure we can do them at the same time because of funding. We would attack them one at a time."

Environmentalists viewed the Jackson legislation as a way to clean up a long-leftover mess. But though the State Lands Commission has identified nearly 200 orphaned wells off Summerland alone, it doesn’t plan to plug them all.

The primary goal was to create an inventory of the wells and study the natural seepage, Scott said.

If there is a report of a leaking well, and the state’s contractor investigates and determines it’s not a natural seep, then the commission will go in and clean up.

But the commission doesn’t intend to embark on a massive plugging strategy. The state has no baseline of data from pre-regulatory wells. So it’s working in the dark, Scott said.

Though California is well-known for some of the most ambitious green plans in the country, it’s also a stand-alone consumer of significant magnitude, said Bob Poole, director of production, state and coastal issues at the Western States Petroleum Association.

"It is ironic that there is a lot of oil in California, much to the chagrin to some folks," Poole said.

California burns through tremendous amounts of crude, and most of the oil in its refineries is produced overseas. In 2017, the state imported 344 million barrels of crude, mostly from Saudi Arabia. The three largest providers were Saudi Arabia, Ecuador and Colombia.

Poole, who represents the oil and gas industry, says he tries to get people to understand that oil is here for the foreseeable future.

"California is trying to find its way, like lots of other places," he said. "Energy runs the economy regardless of how you feel about it."

In Santa Barbara, the conflict of chasing a new energy system while living in the old one is ever present.

"We joke with our kids when they are little that those are pirate ships," said Dennis Bozanich, deputy CEO of Santa Barbara County, of the offshore platforms whose lights blink in the dark. "It’s a delicate dance policywise in terms of allowance for additional offshore."

Errin Briggs, energy specialist for Santa Barbara County, said Plains All-American Pipeline has applied to rebuild the link that broke in 2015, once again linking offshore production to refineries in other parts of the state. The company didn’t provide comment before publication.

In the meantime, Exxon, which still has plans to produce offshore, has applied to allow trucking the crude, Briggs said. That application is still pending. County officials shut down an earlier attempt by the company to secure an emergency permit to truck crude following the pipeline rupture.

Activists are firm in their opposition to new operations or a repair that will restart production.

They worked hard to vacate federal leases that ringed the Santa Barbara coast in federal waters, and they are watching closely the expensive decommissioning that’s slowly taking place for the Holly platform — the first of the offshore platforms to go through the shutdown process.

"It’s not going to happen overnight," said Linda Krop, chief counsel for the Environmental Defense Center. "As long as they are shut down and the wells get properly plugged, that’s OK."

Are the times changing?

It’s a new era for the region, but an uncertain transition.

The county has some concerns, Briggs said, that while Chevron Corp. and other large operators are big enough to handle cleanup liabilities for the massive offshore operations, smaller players may not.

"I think we are hoping others don’t follow in their footsteps," Briggs said of Venoco, the bankrupt firm.

But industry has argued that ending offshore production may not be what environmentalists really want. It warns that the increase in pressure within the reservoirs that will be caused by ceasing production of resources may make natural seeps spew even more oil.

Venoco, the bankrupt oil firm, had tents placed over natural seeps in the vicinity of platform Holly to catch hydrocarbons. Those seeps stopped producing around 2013, said Bantilan, the chief of staff in the Santa Barbara County office.

People are reporting that the seeps are active again since drilling has stopped, he said.

"Which is why we need more research," he told E&E News.

Bantilan said he has a good relationship with many of the activists in the area but believes some may be hesitant to talk about natural seepage. Right now, activists have political momentum behind them to address leaking wells and push for an end to offshore production, he said.

"When you’re winning, you never want to debate the challenger," he said.

The Environmental Defense Center’s Heller said she’s realistic. She said she knows that the natural seepage means oil, to some degree, is here to stay.

But there is a change, she said: People don’t want to pay the price for oil development anymore.

"Historically, we embraced it before we understood the risks," she said.

Jackson, the state senator, said she knows much of the state is still thinking of oil as a jobs and revenue driver. But California by and large is headed in the right direction, she said.

But if California and others turn away from industry, is there fear that the oil business may not be around to clean up when it’s time to shut it all down?