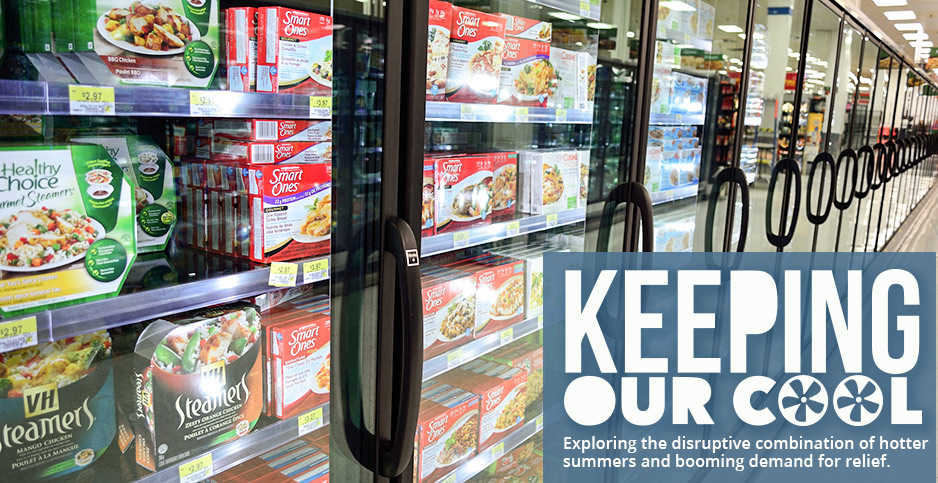 When newly graduated environmental lawyer Keilly Witman joined U.S. EPA in 2007, she was handed one of its toughest jobs. She had to convince supermarkets that their leaky air conditioning and refrigeration systems needed to be fixed or they would substantially warm the Earth’s atmosphere.

According to a recent study by the Department of Energy’s Oak Ridge National Laboratory, the average supermarket uses about 2.5 million kilowatt-hours of electricity annually, the equivalent of about 213 American homes. Sixty to 70 percent of their electricity for air conditioning and refrigeration is spent pushing refrigerants through miles of pipes and running big compressors and condensers to keep things cool.

But Witman’s job was to remind them that their leaking refrigerants had already been blamed for destroying the Earth’s ozone layer, which protects people from harmful solar radiation. She was also there to alert them that many newer ozone-saving refrigerants are chemicals with thousands of times the global warming potency of carbon dioxide.

People in EPA’s Stratospheric Protection Division warned Witman that the leaky pipe problem had festered for years and they needed a creative way to solve it. She saw her job as a rare opportunity. "The EPA is not used to having to convince people to do things," Witman explained. She set up a voluntary program called the GreenChill Partnership; it was meant to find companies that had innovative ways of preventing refrigerant leaks, so they might help other supermarket chains.

GreenChill was the beginning of EPA’s good-cop, bad-cop approach to the problem. A few chains, such as Whole Foods, Hannaford Bros. and Harris Teeter, were interested right away, but others took years of convincing.

Air conditioning was invented in the United States, and the technology hasn’t changed much until recently. There is a new family of refrigerants in Europe and Asia that were gaining attention. In her sales pitch, Witman — who was once the entire staff of GreenChill — would point out that stores in Europe had been able to cut the cost of their leaks by using a much cheaper chemical — carbon dioxide — as a refrigerant.

Witman’s biggest selling point was that reducing refrigerant leaks would help supermarkets make money. According to EPA, the average U.S. supermarket leaks 1,000 pounds of refrigerant a year, which, at a cost of $10 to $20 per pound, is expensive. Preventing leaks also would eliminate emergency service calls that were seen as a fact of life in the supermarket industry.

"When people realized you could actually save money, we had people joining the partnership who really didn’t care about the environment. They just wanted to save the money," Witman said. "That was no problem for me, because the whole time they were saving money, they were helping the environment."

Still, about two-thirds of U.S. supermarkets didn’t respond to GreenChill.

The United States, according to a study by DOE, has had a "slow uptake of the technology," caused by "a lack of retailer awareness"; skeptical buyers who hadn’t seen it tested; and a limited number of vendors, system designers and engineers who are familiar with it.

Finally, in 2013, the Hannaford Bros. supermarket chain opened the first U.S. CO2-refrigerated store in Turner, Maine, using a refrigeration system imported from Canada. The DOE study compared it with another New England Hannaford store using an HFC-404A refrigerant and found that, while the CO2 system’s cost was 40 percent greater because it required a higher pressure, the store’s operating expenses were lower because annual refrigerant losses were cut by 75 percent.

What most impressed EPA was that the Turner store’s climate footprint was reduced by 15 percent. So GreenChill gave Hannaford its "Best of the Best" award for its pioneering efforts. And DOE predicted in its study that the future potential for CO2 systems in U.S. supermarkets would be "large."

Meanwhile, EPA, driven by the Obama administration’s interest in promoting global warming solutions, had begun to propose tougher rules on managing refrigerants and to phase out the use of super-warming chemicals using its powers under the Clean Air Act.

Several of its rules were opposed by the Food Marketing Institute, the main trade association for the supermarket industry, as being "unduly burdensome." On its website, FMI still claims it’s a "myth" that "grocery stores have been slow to adopt energy efficient models and [that] refrigerant emissions remain high."

Although there are new automated leak detection systems, he noted the traditional service call is to recharge the leaking system with new refrigerant and not bother about finding and fixing the leaks, "which means you’ll be back a few months from now to do the same thing."

Some big supermarket chains, he estimated, were reluctant to pay the upfront costs of fixing the leaks, so they were losing as much as $500,000 a year. "That’s one of the challenges the industry has," he said. "I don’t think that most people would knowledgeably throw away that much money."

“I don’t think that most people would knowledgeably throw away that much money.”

A year later, EPA extracted $335,000 in penalties from Costco in a settlement requiring a better refrigeration management plan covering 274 stores over three years. Its estimated cost was $2 million. The agreement stated that Costco "failed to make timely repairs to leaks on refrigeration equipment and to maintain proper records." Under the settlement, Costco agreed to develop a chain of command for monitoring leaks that extends from an individual warehouse to officials at Costco’s headquarters in Issaquah, Wash.

In June 2016, EPA and DOJ made a bargain with Trader Joe’s, a settlement covering 453 of its stores. The supermarket chain agreed to pay a $500,000 civil penalty; to cut its leak rate to 12.1 percent; and to use advanced refrigerants, such as carbon dioxide, in some of its stores. According to EPA, Trader Joe’s — renowned for its varieties of crunchy granola and recycling of paper bags — was using refrigerants that were up to 4,700 times more potent at warming the atmosphere than CO2.

Wallace of Emerson Climate Technologies said he thinks EPA’s most effective approach has been its voluntary GreenChill program, but noted that the Trump administration’s proposed budget plans to eliminate it.

"That’s kind of up in the air right now," he said.