Legal battle could drag on even if Utah sites are restored 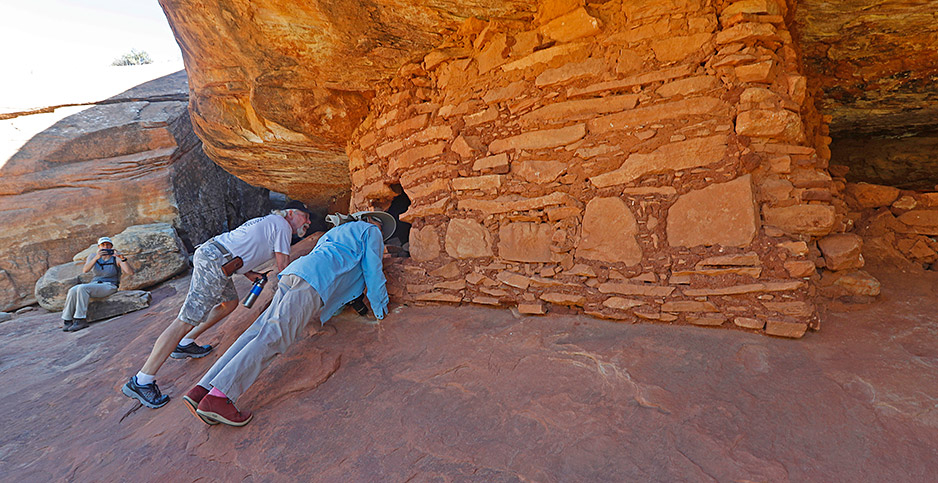 Two people are pictured looking inside an ancient granary, part of the House on Fire ruins in the South Fork of Mule Canyon in Bears Ears National Monument outside Blanding, Utah. George Frey/Getty Images

President Biden is expected to soon restore protections to more than 2 million acres of public lands his predecessor excised from a pair of national monuments, but quarrels over the acreage are far from over.

In fact, disputes could grind on for years as management plans are rewritten and legal battles continue.

The White House, which last week received the Interior Department’s recommendations on the Bears Ears and Grand Staircase-Escalante national monuments, has remained mum on when the president will issue his decision (Greenwire, June 4).

Still, given that Biden pledged to reverse then-President Trump’s cuts to the monuments during the 2020 campaign, advocates for the monuments believe there’s little uncertainly about what he will ultimately do (Greenwire, Nov. 3, 2020).

Exactly how Biden will unwind those reductions — Trump shrank Bears Ears from 1.35 million acres to about 202,000 acres and reduced the Grand Staircase-Escalante to about half of its former 1.9-million-acre footprint — is an open question, and one that could affect the sites for years to come.

"There’s likely to be litigation regardless of what happens," asserted University of Colorado Law School professor Mark Squillace, who specializes in natural resources law.

In particular, Squillace pointed to lingering arguments over whether Trump exceeded his authority under the Antiquities Act of 1906 when he shrank the sites.

That law permits presidents to set aside public lands as national monuments to protect areas of cultural, historic and scientific interest.

In his proclamation designating the Bears Ears monument, then-President Obama noted that the area is "one of the densest and most significant cultural landscapes in the United States," replete with "rock art, ancient cliff dwellings, ceremonial sites, and countless other artifacts [that] provide an extraordinary archaeological and cultural record."

Trump used the law to reduce both Utah sites at the behest of GOP officials who had long criticized the monuments. Former House Natural Resources Chair Rob Bishop (R-Utah) once described the sites as "excessive in size and contemptuous of peoples’ livelihoods" (E&E News PM, Nov. 13, 2017).

But plaintiffs in a pair of lawsuits argue that only Congress has the ability to reduce or eliminate existing monuments. Those cases are currently on hold in the U.S. District Court for the District of Columbia pending Biden’s decision.

"My sense is that they’re going to want to avoid any suggestions that the Trump proclamations were ever valid, but exactly how you do that is unclear," Squillace said, noting that the White House could look to new legal opinions from the solicitor general or the Office of Legal Counsel at the Justice Department.

Invalidating Trump’s actions could also curtail potential legal battles over recent uranium mining claims made on land cut from the Bears Ears monument, as well as on more than 40,000 acres of land nominated for oil and gas leasing. Utah NPR affiliate KUER first reported on efforts to drill and mine earlier this month.

Still, there is no guarantee that Biden’s decision would end the respective lawsuits challenging Trump’s reductions.

"That really depends on what actions the president takes," said Matthew Campbell, a staff attorney with the Native American Rights Fund.

He pointed to a March order from District Judge Tanya Chutkan that lays out three options, allowing the parties to declare their dispute moot, request additional time to negotiate a resolution, or continue with the lawsuit.

"We will be addressing those three items after there is some action by the president, assuming there will be," Campbell said.

Some observers are leery of an unnecessary court battle. They point to Chief Justice John Roberts, who earlier this year in a different case suggested the Supreme Court could take a fresh look at precedent that governs the Antiquities Act (Greenwire, March 24).

In the meantime, Utah lawmakers have taken a hard-line position urging Biden against taking unilateral action to restore the monuments, arguing instead that Congress must be given time to pass new legislation establishing both sites — and raising the threat of new lawsuits if that doesn’t happen.

In a letter to Biden yesterday, Utah’s six-member, all-GOP delegation requested an in-person meeting with the president before he finalizes any decisions.

"Our delegation, tribal governments, local partners, and department officials have worked in good faith to share and listen to differing viewpoints on this issue. In that same spirit, we request you meet with us before making a final decision and publicly release the Secretary’s report recommendations," stated the letter, a copy of which was released by Utah Sen. Mitt Romney’s office.

The letter called a legislative solution "the only path to resolving the longstanding dispute over the monuments’ boundaries and management."

"If the administration acts unilaterally, a legislative solution will be nearly impossible to achieve and it would only lead to further conflict, division, and lawsuits," the letter added.

Utah Gov. Spencer Cox (R) has likewise warned that his state is prepared to file a lawsuit against the federal government if Biden uses the Antiquities Act.

"I’m not posturing as a way to say to the administration, ‘Hey, if you don’t do this, we’re going to sue you,’" Cox told The Salt Lake Tribune in April. "But if I’m being practical and realistic … that’s what’s likely to happen."

In that case, decided in 2004, a judge ruled against the Utah Association of Counties, which had argued that Clinton had exceeded his authority under the Antiquities Act by designating too much land (Greenwire, March 16, 2018).

"We need to see leadership from Gov. Cox and from the delegation," Bloch said. "Cox and others would definitely come out on the wrong side of this if they argue these are not some of the most remarkable places in the country, with objects and sacred sites that demand a very high level of protection."

Regardless of exactly how Biden opts to restore the monuments — whether his proclamations or other statements address the validity of Trump’s actions — the first major step for both sites will be similar: rolling out new resource management plans.

That direction is vital given that management plans — which require public comment and environmental impact statements — can take years to prepare and finalize.

"I would not be surprised to see a Biden proclamation set forth a deadline for finishing these plans," Bloch predicted. "It’s tough because the Bureau [of Land Management] was cash-starved by the Trump administration."

WildEarth Guardians Public Lands Guardian Chris Krupp said he is concerned that the management planning process could become "drawn-out" over objections to the monuments.

"Our primary concern is the restored lands are protected as soon as possible," Krupp said.

"Folks that were part of the original vision — and elevating science on the monument — those people left, and the positions weren’t filled, and they didn’t have the funding to support the full vision of the monument," Bauman said. "Over the years, that conservation science priority … it really deteriorated."

She added: "It has to be a full restoration of the funding needed and the resources on the ground."

Bauman also noted that a new resource management plan for the monument must focus on conservation of the landscape, rather than a multi-use plan that embraces activities like grazing.

"We see this as an opportunity to restore the monument," Bauman said. "We’re out there every day with our crew doing conservation and restoration work. We really see this landscape as something that is deserving of protections on so many levels. I believe the Biden administration also recognizes that."

Proponents of both monuments also asserted it will be key for the Biden administration to ensure that Native American tribal leaders play a key role in the new management plans.

"It would be really important to hear from either the new BLM director or [Interior Secretary Deb] Haaland that they are committed to doing collaborative management right," said Keala Carter, the Bears Ears Inter-Tribal Coalition’s lead advocate and public lands specialist.

The coalition, which represents the Navajo Nation and Pueblo of Zuni, as well as the Hopi, Ute Mountain Ute and Ute Indian tribes, played a key role in Obama’s establishment of the site in late 2016.

"This Advisory Committee lacks Native wisdom, lacks support from sovereign Tribes, and fails to reflect the local community that most depends on protection of these lands," Utah Diné Bikéyah board Chair Davis Filfred said at that time (Greenwire, April 25, 2019).

The Bears Ears Inter-Tribal Coalition refused to nominate candidates for the committee as a form of protest over cuts to the monument.

But Carter said a new proclamation could help create a new opportunity for collaboration and "relationship building" between tribal leaders and the Interior Department.

"This is important. It needs to be done carefully and not fast-tracked, or done with some sort of tribal checkoff," Carter said. "We need to think really creatively: first and foremost, with input from the tribes about how to do it right."

"Meaningful engagement early on is critical," Campbell said. "Obviously, managing the monument really depends on how the proclamation may look."

Bauman said she hopes to see a similar effort established for the Grand Staircase-Escalante monument, noting that efforts to include Indigenous knowledge in the site’s management have fallen short in the past.

"The tribes haven’t been included in a way that has been meaningful," Bauman said. "We’re hoping there’s some language that sets up a platform for the tribes to determine what that looks like."

She added: "Certainly we can do better than we did before."