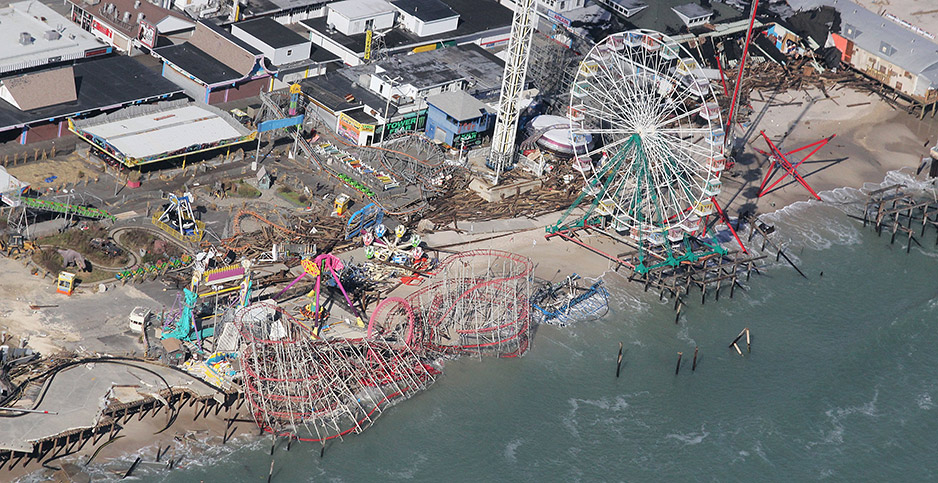 An amusement park in Seaside Heights, N.J., lies in ruins after being hit by 2012's Superstorm Sandy. The nearby government of Harvey Cedars, N.J., was sued in 2013 after it tried to build a protective dune to lessen the impact of similar disasters. Kevin Coughlin/Zuma Press/Newscom

Courtroom action could prove to be a mixed bag for state and local efforts to adapt to rising temperatures and shifting seas.

Lawsuits related to adaptation projects have proliferated along the U.S. coasts, where attempts to respond to climate change — and questions over how to fund those measures — are pressing concerns. Legal experts say litigation over adaptation may affect whether and how states, cities and towns buffer their residents, landscapes and infrastructure against climate impacts.

Not everyone is convinced that’s a good thing.

"One of the things I am increasingly nervous about is that a lot of our adaptation in the legal realm, I’m afraid, will be driven by lawsuits," said Thomas Ruppert, coastal planning specialist at the University of Florida’s Florida Sea Grant program.

"And that’s really, I think, far from ideal."

Ruppert and other experts worry that lawsuits over adaptation measures could chill localities’ efforts to stem climate change effects like sea-level rise.

In 2013, for instance, Harvey and Phyllis Karan sued the New Jersey borough of Harvey Cedars after local officials invoked eminent domain to build a protective storm dune on the Karans’ property that blocked their oceanfront view.

Lower courts would have paid the couple more than $300,000 for the loss of their view, but justices for the New Jersey Supreme Court held that the storm protection measure actually added to the value of the Karans’ property.

The couple ended up settling for $1 out of court.

Governments could also be sued for not doing enough to mitigate damage from major flooding events and other climate-related impacts.

The U.S. Court of Federal Claims, for example, recently found the Army Corps of Engineers liable for flooding homes near a Texas reservoir during Hurricane Harvey (Greenwire, Dec. 18, 2019).

"Because we’re living in a moment where people are becoming more aware of the very significant risks that climate [change] poses … there is perhaps a little bit more political headroom to do things in land use policy or in permitting that would essentially enhance adaptation," she said.

"I believe that over time, as the impacts worsen, the law will begin to adjust because the damages will increase," she said. "And over time, courts do tend to adjust to new circumstances, but it just takes awhile."

Change occurs, she said, "case by case and courtroom by courtroom."

Ruppert said he’s "sympathetic" to the desire to push local governments for better climate adaptation measures, but he said local leaders may find "perverse incentives" for failing to do so.

State and local governments in need of revenue could be tempted by lucrative opportunities to develop at-risk coastal areas. Denying or hindering those opportunities for the sake of climate adaptation, he said, could leave those localities legally vulnerable.

Governments "have to be willing to undertake short-term pain for that long-term gain," Ruppert said. "Those are not trade-offs that are easy for either state or local governments to undertake."

Though state and local officials’ fear of liability may be acute, Peloso said the actual risk of lawsuits may be overblown.

According to long-standing common law that governs erosion, private land that is completely submerged reverts to government ownership. States could argue, Peloso said, that they are simply exercising their rights by slowing down coastal development on land that will return to the government’s hands once it is submerged by rising seas.

"There are ways you could create and structure these tools, but they would be subject to litigation," she said. "In general, state and local governments, even if they’re interested in this, have not yet gotten to the point where they’ve got the right case or they’re really ready to litigate."

Ruppert said "statewide, resilient standards for infrastructure" are the way to move forward with adaptation on the local level.

Those standards, he said, would need to be flexible enough to satisfy competing interests while acknowledging that adaptation efforts for the many cannot be governed by the needs of the few.

Hill said adaptation lawsuits could help shape a legal system that is currently not equipped to fully deal with a warming planet.

"We have this overlay of preexisting built-up systems," she said. "In this case, it’s our governance system for communities, and we have to work around those in order to adapt to this threat that just doesn’t honor any of these boundaries or systems that we humans have created."

The courts, she said, will eventually catch up.

"How much damage will we have suffered before we get there?" Hill asked. "It’s unclear."