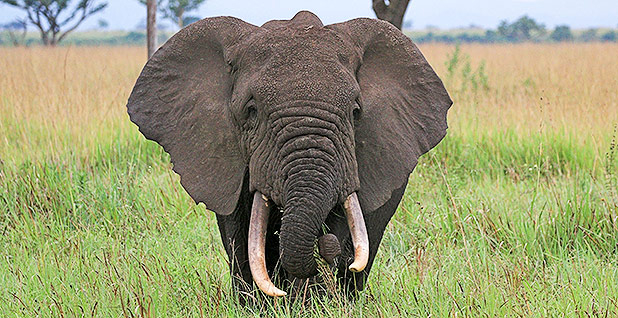 The Interior Department is still struggling on a policy for African elephant trophy imports. Charlesjsharp/Wikimedia Commons

The Interior Department is still struggling amid growing legal challenges to work out what to do about elephant trophy imports from Zimbabwe and Zambia.

Though President Trump on Nov. 19 declared that the politically sensitive and administratively complex elephant trophy decision would be made "next week," officials today have not reported any progress.

Whatever is happening remains under wraps.

Once made, moreover, the Trump administration’s do-over could still be gored by the litigation that expanded yesterday with the filing of a second lawsuit. Depending on which way the administration turns next, more suits could be coming from other directions (Greenwire, Nov. 20).

In the suit filed yesterday, Friends of Animals and the Zimbabwe Conservation Task Force challenged the Fish and Wildlife Service’s original decision earlier this month to lift the 3-year-old ban on the elephant trophy imports.

"There is no indication that FWS’ previous concerns about management, utilization of hunting revenues or poaching levels and prevention have been addressed or fixed by Zimbabwe’s new Elephant Management Plan," Michael Harris, director of Friends of Animals’ Wildlife Law Program, said in a statement.

Citing a detailed assessment, the Fish and Wildlife Service declared Nov. 16 it could "make a determination that the killing of trophy animals in Zimbabwe, on or after January 21, 2016, and on or before December 31, 2018, will enhance the survival of the African elephant" (Greenwire, Nov. 16).

With the enhancement finding, and a similar one for Zambia, the agency announced it would resume issuing trophy import permits for the two African countries. Outcry ensued.

Trump quickly buckled under pressure, saying on Twitter that he would put the decision "on hold" so he could "review all conservation facts." He retweeted commentators who praised him, and on Nov. 19 he foreshadowed his intentions.

"Big-game trophy decision will be announced next week but will be very hard pressed to change my mind that this horror show in any way helps conservation of Elephants or any other animal," Trump wrote on Twitter.

The new lawsuit filed in the U.S. District Court for the District of Columbia reinforces an earlier suit filed Nov. 20 by the Natural Resources Defense Council and the Center for Biological Diversity. Neither suit takes Trump’s apparent reversal as durable.

"Putting trophy imports ‘on hold’ isn’t enough," Elly Pepper, deputy director of wildlife trade for NRDC, said in a statement. "If we don’t force the administration to completely revoke its decision, President Trump could quietly start allowing these imports as soon as he stops facing criticism on Twitter."

The environmental groups, though, aren’t the only ones with lawyers and a vocal constituency.

The 50,000-member Safari Club International, which previously sued to lift the import ban imposed in 2014, has issued a "call to arms" urging individuals to contact Interior.

"Hunters and conservationists have waited for many years for an importation decision that reflects the correct and verifiable facts about elephant importation and species conservation," wrote Safari Club International President Paul Babaz to Trump on Nov. 20.

A reversal of the Fish and Wildlife Service’s extensively studied decision to lift the ban could invite a legal challenge from critics claiming the U-turn was "arbitrary and capricious" and violated the Administrative Procedure Act, a statute Trump has never mentioned over the course of more than 36,000 posts on his Twitter account.