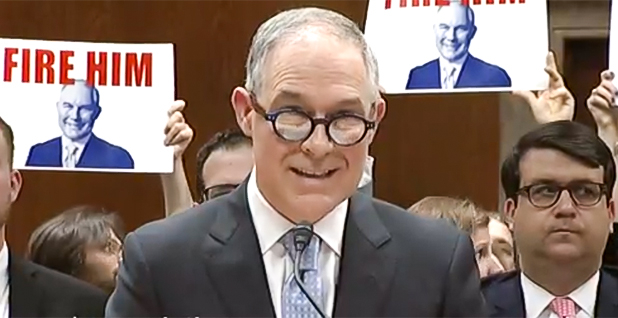 Under tough questioning this morning from Senate Democrats, EPA Administrator Scott Pruitt said he has established a legal defense fund as he grapples with multiple ethics investigations.

"Yes, it has been set up," Pruitt said when asked by Sen. Chris Van Hollen (D-Md.) at the Interior, Environment and Related Agencies Appropriations Subcommittee hearing. The EPA chief said his attorney is working to make sure the fund is established appropriately.

Van Hollen also asked Pruitt if he would disclose donations to the fund so the public can see who’s financing his defense.

"They will be published, yes," the administrator said.

Pruitt’s public confirmation of his legal defense fund comes as his and his top aides’ actions have become subject to several probes by the EPA Office of Inspector General, GAO and others. The EPA chief’s travel, security, rental of a condo linked to lobbyist whose firm’s clients have business before the agency, and other alleged ethics problems have come under scrutiny.

Today’s hearing was scheduled to discuss President Trump’s fiscal 2019 budget proposal for EPA, but it served as another opportunity for Pruitt’s Democratic critics to question the administrator about the wide-ranging ethics allegations.

"It’s hard to know what to begin with today," said Sen. Tom Udall (D-N.M.), the subcommittee’s ranking member. "Every day, there seems to be a new scandal, and you at the center of it."

Subcommittee Chairwoman Lisa Murkowski (R-Alaska) also acknowledged ethics allegations swirling about Pruitt. She said she’s "constantly asked" about his management of the agency, which overshadows much of his policy work that she is in agreement with.

"I think there are legitimate questions that need to be answered," Murkowski said.

Sen. Patrick Leahy (D-Vt.), ranking member on the full Appropriations Committee, said Pruitt has become a "laughingstock" along with his agency. He poked fun at the EPA chief’s flying first class due to security reasons.

In his opening remarks, Pruitt sought to emphasize the moves he has taken at EPA to pare regulations and rules, which he claimed have led to $1 billion in savings over the past year. He also detailed a whirlwind of action at EPA since his last appearances at congressional hearings three weeks ago: creating a new office to streamline agency operations, plans to restrict the sale of the deadly paint-stripper chemical methylene chloride and reform of EPA’s air quality standards.

Pruitt also addressed the ethics allegations against him in general. He attributed some of the scrutiny to opponents of Trump’s agenda for EPA.

"That has brought competition and criticism," he said.

But he also acknowledged that he would have done some things differently during his 16 months at the agency so far.

"When I look back, I would not make some of those decisions again," Pruitt said, adding that he shared senators’ concerns and wants to "rectify" issues.

Udall asked Pruitt a surprise question on whether he supports Special Counsel Robert Mueller’s investigation into the Trump presidential campaign and Russia’s meddling in the 2016 election. Pruitt has been rumored as a future attorney general for Trump and, if nominated and confirmed for the job, would oversee Mueller’s investigation.

Pruitt stammered at first and asked the senator to repeat the question. He then said that as a former state attorney general from Oklahoma, he supports prosecutors and their work.

"As you know, the right answer is yes," Udall said.

Udall also pushed Pruitt on his reported requests to his security detail to use lights and sirens to escape Washington traffic. The administrator said he adhered to EPA policy.

"Those policies were followed to the best of my knowledge by the agents that served me," Pruitt said.

Udall then added an email to the hearing record from Pasquale "Nino" Perrotta, the now-retired EPA special agent who led Pruitt’s security detail. The email said the administrator "encourages" the use of lights and sirens.

At today’s hearing, Pruitt faced questioning over his 24/7 security protection, his rental of a condo linked to a lobbyist and a top aide who went house hunting for the EPA chief. The administrator deflected many of the questions, including distancing himself from an agency tweet that took a shot at Democrats for opposing the confirmation of EPA Deputy Administrator Andrew Wheeler.

"The agency should have not done that," Pruitt said about the tweet.

Udall said he was calling for a GAO investigation into the tweet to see whether it violated anti-propaganda laws.

Senators also took their chance with Pruitt to discuss parochial interests. Several, including Democrats, asked about Superfund sites in their states.

Sen. Jon Tester (D-Mont.) asked the EPA chief about progress being made under the Superfund program to clean up a toxic waste site in Butte, Mont. Despite Pruitt’s focus on the program, Trump’s budget plan would actually cut funds for it.

"They need to have the resources and manpower," Tester said.

Pruitt confirmed the proposed Superfund budget cut, adding, "Sometimes, I’m not as persuasive as I want to be with OMB."

He suggested the agency would complete a repeal and replacement of the Clean Power Plan this year. Pruitt offered few specifics about next steps to Sen. Shelley Moore Capito (R-W.Va.), who requested an update on progress.

He noted that the agency has put out an advance notice of proposed rulemaking to solicit comment on a replacement and has completed a series of public listening sessions across the country on repeal of the Obama-era rule. The agency is still proceeding in the rulemaking process.

"We anticipate that all occurring in 2018," the administrator said.

EPA previously predicted it plans to complete a repeal of the rule on power plant carbon emissions in October, while a notice of proposed rulemaking is expected by next month.

The West Virginia Republican also asked Pruitt about a toxicology study on per- and polyfluoroalkyl substances, or PFAS, that is reportedly being held up by EPA. The study on the chemicals has been termed a "public relations nightmare" in internal emails that lawmakers have called upon the Trump administration to release (E&E Daily, May 15).

Capito pressed Pruitt to release the study. The EPA chief acknowledged that the agency should take "concrete action" related to chemicals like PFAS and said he was not aware of the study being held up.