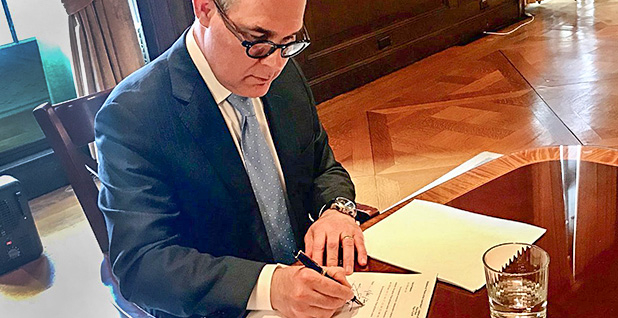 The Trump administration yesterday finalized a delay of the 2015 Clean Water Rule, offering a peek at how it might mount a court defense of its unconventional tactic.

U.S. EPA and the Army Corps of Engineers first proposed delaying the rule — also known as Waters of the U.S., or WOTUS — in December, arguing that the delay would provide nationwide consistency in the regulation if the 6th U.S. Court of Appeals’ stay of the regulation were invalidated.

Last week, the Supreme Court confirmed the administration’s fears, ruling that district courts have jurisdiction over legal challenges to WOTUS, which aims to clarify which isolated wetlands and streams are protected under the Clean Water Act. While the 6th Circuit stay remains in place for now, it will be withdrawn imminently, something the administration mentions in its final regulation delaying the Obama-era rule.

But legal experts have questioned whether the delay would hold up in court because of the administration’s word choice.

Early drafts of the regulation would have changed the "effective date" of WOTUS, and courts have ruled that a rule’s effective date cannot be changed after it takes effect. In later drafts of the proposal, the administration changed that wording, saying it wanted to add an "applicability date" to the rule (Greenwire, Dec. 14, 2017).

The administration explains that word change in the final version of the rule that EPA Administrator Scott Pruitt signed yesterday.

"The agencies are not changing that effective date," the rule says.

While the agencies don’t address case law saying effective dates of regulations cannot be changed after they take effect, they explain why the administration has the authority to add an applicability date.

While other parts of the Clean Water Act issue clear instructions to agencies about the need to write regulations and the timing of those regulations, the agencies said, the law has no similar direction when it comes to defining the "waters of the United States."

That means, the agencies said, that EPA and the Army Corps could have issued the same rule in 2015 with an applicability date many years in the future.

Will that explanation hold up in court? The administration’s foes aim to find out.

While most rules only go into effect 30 to 60 days after being posted in the Federal Register, this one takes effect the same day it is published, and legal challenges could also be filed at the same time.

"The Trump Administration’s suspension of the Clean Water Rule threatens to eliminate protections for millions of miles of streams and acres of wetlands across the country," he said in a statement. "The Clean Water Rule is a common sense application of the law and the best science to protect our waters. The Trump Administration’s suspension of these vital protections is reckless and illegal. That’s why I will lead a multi-state coalition that will sue to block this rollback in court."

"Every single layer," he said, "is lawless."

Buzbee said the Trump administration didn’t fully address its change in word choice because it ignored case law on delayed regulations — including three rulings against the administration’s own attempts to postpone other rules.

Larry Liebesman, a former Department of Justice attorney who is now a senior adviser with Washington water resources firm Dawson & Associates, agreed that it’s "risky" for the administration to argue that a lack of direction from the Clean Water Act allows it to add an applicability date to the definition.

While a court might rule that the agencies have the discretion to create a new term, he said, that’s less likely "when you are dealing with a situation like this where the effective date is already passed over by two years."

"Honestly, I don’t see it as being a problem," he said. "The reality is they are just providing clarity for everyone, and they are not doing any substantive change."

Others have pointed out that EPA chief Pruitt himself seems to be confused over the terminology.

Speaking before the National Association of State Departments of Agriculture yesterday, Pruitt told the audience that he intended to sign the final regulation that same day but described it as a delayed effective date.

"I’ll be signing that today, the extension of the effective date — it’s finalized today," he said (E&E News PM, Jan. 31).

Pruitt repeated that phrase several times, explaining that the regulation was proposed so WOTUS would not be enforceable if the 6th Circuit’s stay were lifted. That step, he said, is different from EPA and the Army Corps’ continued efforts to repeal WOTUS altogether.

Said Buzbee, "If [Pruitt] is fundamentally confused, it is because what he is doing is just speaking honestly that this is just creating a new word for something they know they can’t do."

In a legal challenge, the Georgetown professor said, a federal judge might not consider Pruitt’s comments — usually, challenges to regulations are limited to discussions over the agency’s official position, meaning what is written in proposed and final regulations.

But, Buzbee said, "lawyers will point it out in the flavor that, overall, that argument is a sham."

George Washington University Law School professor Emily Hammond said she doesn’t see how "applicability date" could make the regulation vulnerable in a legal challenge, but she nonetheless believes the final rule is at risk of being overturned.

"The fact that they are dancing around the two words is immaterial to the question about whether the justification was adequate or whether it followed procedures," she said.

On the procedural question, she said, "the rationale is insufficient and ought not survive judicial review."

Ongoing litigation, or the possibility of having to enforce different definitions in different states, is not a good enough reason to postpone WOTUS, Hammond said.

"That seems awfully flimsy considering how much work EPA put into developing the Clean Water Rule and all of the justifications there," she said.

The Obama administration’s EPA and Army Corps supported their 2015 regulation with a 400-page report explaining the scientific basis for including different wetlands and waterways in federal protection.

Hammond said that if the agencies had learned something new in the science that caused them to question the inclusion of some waterways, for example, that would be a better justification for postponing the regulation.

"Major rules from EPA are always likely to endure litigation," she said. "A justification to postpone the rule really would be better related to something new EPA has learned since publishing the rule."

Said Buzbee, "I can’t say enough how strange this is. The idea that an agency will adjust policy is a common thing. What is really unusual is here you have a legal explanation that does not cite to any of the major cases on this issue."

But Heritage’s Bakst maintained that the agencies have "broad authority" to change or delay regulations.