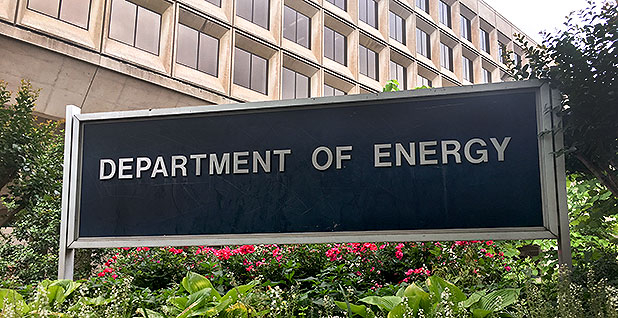 The Energy Department could use emergency authority to prop up FirstEnergy power plants. Claudine Hellmuth/E&E News

On March 29, FES told Perry that its money-losing coal and nuclear power plants face closure — amounting to a grid emergency — and that the Department of Energy should use its authority under Section 202(c) of the Federal Power Act to keep them online. It asked DOE to direct regional grid operator PJM Interconnection LLC to compensate the utility for the "full benefits" of its power plants in the eastern United States.

"The 202(c) may not be the way that we decide that is the most appropriate, the most efficient way to address this," Perry said at a Bloomberg New Energy Finance summit in New York (E&E News PM, April 9).

"It is not the only way," Perry said without elaborating on the other ways DOE could help the FirstEnergy plants.

Last year, speaking at the same conference, Perry called for a potentially expanded use of 202(c) as a tool to support coal and nuclear plants nationwide. But according to legal experts, DOE doesn’t have a lot of legal flexibility under the language of 202(c) because the definition of "emergency" is well-defined in the law and does not include when electricity generators cannot make money because of market rules.

A 202(c) order is reviewable under the judicial review procedures as laid out in Section 313 of the Federal Power Act, which means a challenge could be filed in the U.S. Court of Appeals for the District of Columbia Circuit, said University of Richmond energy law professor Joel Eisen.

If DOE were to issue a 202(c) order, "people would be immediately filing challenges at the D.C. Circuit," said Ari Peskoe, director of the Electricity Law Initiative at Harvard Law School.

Such a legal move, which is almost assured from other power generators, natural gas interests and large electricity consumers, among others, would prevent any meaningful "emergency" action to help the FES plants.

The most likely request by opponents would be for a stay of the order, Peskoe said. "The court takes those up much more quickly," he said.

At the same time, opponents could challenge the legality of a DOE order, Peskoe said, and "the entire litigation itself could take one to two years," based on how long previous significant administrative law challenges have taken to wind their way through federal court.

"The whole point is that this is supposedly an emergency and that DOE would act very quickly, but this is not a normal request," he said, pointing out that most requests for relief under 202(c) are handled in a matter of days, but the current FES request was made 11 days ago.

What if no one takes DOE to court?

Based on DOE rules, an order would encourage the applicant, FirstEnergy, and the "generating or transmitting systems from which emergency service is requested," in this case PJM, to work out an arrangement for compensation, either using existing rates or negotiating new ones.

If they are unable to come to a payment agreement, then DOE can set "conditions" of service, but the critical role of setting rates would go to the Federal Energy Regulatory Commission, "in accordance with its standards and procedures."

If DOE were to issue an order, "PJM and FirstEnergy and all the other generation owners would not agree on the rate," and the task would be up to FERC, Peskoe predicted. "That would set up an interesting process there."

"It’s possible that we would never even get to the situation where FERC is actually holding a proceeding about the rates," he said, because the initial order would end up in litigation or parties might ask for a stay.

A FERC official said he did not know whether the agency has been involved previously in setting rates under a 202(c) order.

FERC actually did just that in December of 2000, the very first time that DOE exercised its 202(c) authority, in response to the California energy crisis.

That order directed dozens of power plants in the West to operate to support the grid and referred to FERC the responsibility to determine rates that would compensate those plants for running.

The day before asking DOE for help, FirstEnergy notified PJM that it plans to close three nuclear plants. That started a 30-day clock, during which time PJM analyzes the FirstEnergy request, said PJM spokesman Ray Dotter.

"At the end of the 30 days, we’d say, ‘We’re really not seeing a problem’ or ‘We see a problem; would you consider running longer?’" Dotter said, in which case PJM would support a so-called reliability-must-run contract for payments over a limited period of time while the grid operator plans for alternative electricity supplies.

"We’re analyzing the impacts on reliability of the grid. If there is no impact, then the process completes and the plant can retire as requested," he said. "If there is an impact that can’t be mitigated before the unit is scheduled to retire, then we can request the unit to continue operating."

But FirstEnergy is searching for a longer-term solution. "We’re looking at a reliability impact," Dotter said. "FirstEnergy at DOE is arguing a resilience impact. That’s not one that we are authorized to make."

FES is "basically looking for a windfall here, and there’s no way that PJM or FERC is going to give that to them," Peskoe said.

No matter whether DOE issues an order or if FERC gets pulled into the issue, "I can’t see any money changing hands anytime soon."