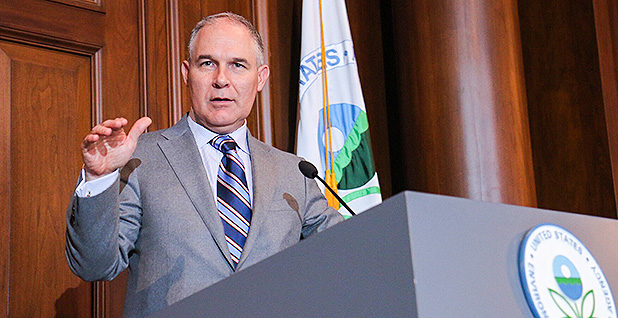 U.S. EPA Administrator Scott Pruitt is expected to sign a proposed rule today that would roll back the Clean Power Plan. @okagpolicy/Twitter

Supporters and opponents of a signature Obama-era effort to address climate change are back in their trenches as the Trump administration prepares to wipe out the regulation.

States, environmentalists and health groups have already mobilized to fight the rollback. Advocates will weigh in heavily during a public comment process and will then head back to the courtroom, where new legal action will build upon the more than two years of litigation that has already ensued.

New challenges will likely focus on whether EPA has justified its plan to scrap the Obama administration’s rule.

State leaders who have led the charge to defend the Clean Power Plan were quick to throw down the gauntlet yesterday, promising continued action to block the Trump administration’s efforts to dismantle it.

"The U.S. Environmental Protection Agency has a legal responsibility to significantly reduce carbon pollution from power plants. This responsibility can only be fulfilled through a strong, effective, and science-based policy like the Clean Power Plan," California Attorney General Xavier Becerra (D) said in a statement. "Repealing it simply won’t cut it. That is why I will do everything in my power to defend the Clean Power Plan."

New York Attorney General Eric Schneiderman (D) warned, "I will sue to protect New Yorkers and put a stop to the Trump administration’s irresponsible and illegal efforts to turn back the clock on public health."

Environmental groups pushed out similar messages of resistance, criticizing the Trump administration’s move as both reckless and illegal.

"But ignoring carbon pollution is not only disastrous policy, it’s against the law," Earthjustice President Trip Van Noppen said in a statement. "The Supreme Court has ruled three times that EPA must protect Americans from carbon pollution that is driving climate change, with devastating consequences. As the Trump administration tries to derail progress on climate change, we will hold them accountable in court."

West Virginia Attorney General Patrick Morrisey (R), a steadfast foe of the regulation who is now running for the Senate, fired back with a declaration of victory over the climate regulation.

"Obama Power Plan is officially dead," he said on Twitter. "Glad to play a central role bringing this illegal regulation down. I fight and win for coal miners."

Experts agree, however, that major legal conflicts are looming.

A leaked version of Pruitt’s plan to toss the Clean Power Plan gives a preview of the next round of legal arguments, raising familiar questions about whether the rule exceeds EPA’s authority and whether the regulation’s benefits outweigh its costs.

According to the Trump administration, the Obama rule must be rolled back because the Clean Air Act does not give EPA the power to regulate "beyond the fence line" of electric power plants. That legal reasoning has driven opposition to the rule since long before it was finalized two years ago.

"How will this repeal stand up in court? My guess is that the courts will say it’s not unreasonable to construe section 111(d) [of the Clean Air Act] to be limited to measures taken within the fence line, although EPA’s previous interpretation may also have been reasonable," University of California, Berkeley, law professor Dan Farber wrote in a blog post last night.

He added, though, that Pruitt will likely face pushback on his policy justifications for the new approach.

The issue turns on the definition of the "best system of emissions reduction" in the statute. The Obama administration interpreted the term broadly, finding that the best "system" to cut emissions was a full-grid approach that had already been successfully applied at smaller scales in states. Critics say that interpretation stretches the relevant portion of the Clean Air Act beyond its intended target: direct emissions from power plants.

The Trump administration’s adoption of that argument has prompted renewed calls from advocates who say the U.S. Court of Appeals for the District of Columbia Circuit should answer the question once and for all. The court considered arguments for and against the Clean Power Plan last fall but put the case on hold without a merits decision when the Trump administration announced plans to rethink the measure. The D.C. Circuit’s latest abeyance of the case ends today.

The proposed rollback also changes the way costs and benefits are calculated for the Clean Power Plan. Critically, EPA’s proposal rejects the Obama administration’s inclusion of the global benefits of reducing greenhouse gas emissions and instead focuses only on domestic gains. That calculus dramatically decreases the anticipated benefits from the rule.

Plus, it ratchets down estimates of health benefits tied to particulate matter reductions and changes estimates of the compliance burdens for the rule by weighing how much it would cost to generate the electricity displaced by energy efficiency spurred by the Clean Power Plan.

Former White House climate adviser Megan Ceronsky argued that the cost-benefit revisions are an attempt to overcome an "inconvenient fact" that the Clean Power Plan is delivering benefits for both climate and air quality.

"When you do all of those things and you add them together, you can say, ‘Look, the Clean Power Plan doesn’t actually do anything because we’ve completely tried to take these massive benefits that the Clean Power Plan would have delivered and made them look very, very small on both the climate side and the co-pollutants side’ — which, of course, is very convenient if you’re trying to undo the Clean Power Plan," she said during a Society of Environmental Journalists panel discussion last week.

"But it is, in my opinion, a travesty in terms of what the EPA is supposed to be doing, which is protecting human health and welfare under the Clean Air Act."

EPA’s proposal to kill the climate rule does not include immediate plans for a replacement.

"The EPA has not determined whether it will promulgate a rule under section 111(d) [of the Clean Air Act] to regulate greenhouse gas (GHG) emissions from existing [electric generating units], and, if it will do so, when it will do so and what form that rule will take," the agency said in its proposal.

While many expect the agency to craft a narrow replacement later, some experts were surprised it didn’t have one ready for release.

"The most, to me, interesting thing is, one of the big questions has been whether they are going to replace the Clean Power Plan with something else," said Bracewell LLP partner Jeff Holmstead, a former EPA air administrator, during last week’s panel. "I think for legal reasons, they would be much better off to issue a replacement rule. But in this particular proposal to repeal, they very clearly said, ‘Well, that’s still up in the air.’"

Indeed, killing the rule without a ready replacement may put a target on the government’s back in the courtroom. The Supreme Court in 2007 affirmed that EPA has authority to regulate greenhouse gases, and the agency in 2009 determined that the emissions endanger public health.

"They have said EPA has the obligation to address this pollution under the Clean Air Act, so whatever happens over the next few weeks, months, 3 ½ years, that obligation remains, and that will be enforced at the end of the day," Ceronsky said. "They do have to act."

Michael Gerrard, director of Columbia Law School’s Sabin Center for Climate Change Law, noted that if EPA "disavows any interest in regulating greenhouse gases," the agency may risk attracting a new round of common law challenges. The Supreme Court previously blocked such actions that focused on greenhouse gases from electric utilities by finding that EPA had jurisdiction over those emissions under the Clean Air Act.

"If EPA is not doing the job, and if EPA disavows any interest in regulating greenhouse gases, it creates an argument that these kinds of theories should come back," he said at the SEJ event.

He noted that legal hurdles would still exist, as some interpret the relevant precedent as preventing common law challenges "as long as EPA has the authority to act, whether or not they are acting."

Holmstead said he agreed, "which is a reason why I’m a little surprised that they’ve still left open the possibility that they may not do anything."

Courts have blocked the administration’s efforts to freeze methane standards from EPA and the Bureau of Land Management and a rule for royalties from federal fossil fuels — finding that officials from EPA and Interior did not comply with the Administrative Procedure Act when they attempted to delay those regulations.

Holmstead said critiques about some of the agency’s other rollback attempts were fair, but he cautioned that the Clean Power Plan withdrawal appears to be more meticulously drafted and the process will benefit from the expertise of new political appointees to the agency.

"I think it’s a fair criticism that [Trump EPA officials], perhaps because they didn’t really have a lot of experience with these issues, they did some things that were legally vulnerable, primarily on process grounds," he said. "Some very fine people have finally been nominated. … Soon, they will have the full contingent of people in place who are much more familiar and who will be very careful to make sure that they follow the procedural requirements."

Ceronsky agreed that EPA is likely proceeding more carefully but added that the agency’s bigger concern should be substantive requirements of the Clean Air Act.

"Even if things are done more carefully in the future, which I agree is likely, there will be fundamental questions of whether or not the things that this administration tries to do do actually comply with the law," she said.