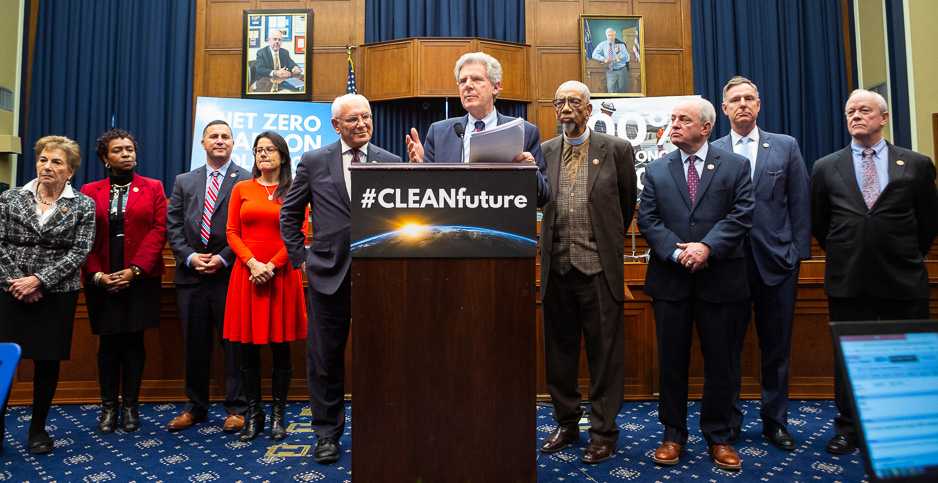 Long-awaited draft climate legislation unveiled by Energy and Commerce Democrats yesterday does not seek to price carbon, a surprising absence in the fluid policy landscape.

Since they took over the House a year ago, Democrats have given few hints as to what they had in mind when it comes to large-scale climate policy, except one.

"I think that should be the center of our comprehensive plan — a price on carbon," Environment and Climate Change Subcommittee Chairman Paul Tonko (D-N.Y.) said in March (Climatewire, March 21, 2019).

And yet the legislative outline unveiled yesterday would look to a clean energy standard to decarbonize power generation and a suite of other regulatory and incentive policies across other sectors — but not an economywide carbon tax or fee.

E&C Chairman Frank Pallone (D-N.J.) made his intentions clear at a news conference yesterday. "We believe we can do it without carbon pricing," he said.

It’s partly jurisdictional, since Energy and Commerce does not have authority over the tax code. But it could be a sign of something larger.

Some climate advocates talked less about carbon pricing during the last year and more about sector-by-sector approaches to decarbonization. For progressives, this means spending gobs of federal money to transition to a zero-emissions economy.

"I think this is a notable shift," said Lindsey Walter, senior policy adviser for the climate and energy program at Third Way.

"We are seeing more attention on performance standards, like clean electricity standards, as the backbone of a national response to climate, which can be complementary to a carbon price. But the carbon pricing schemes are no longer central to a lot of the decarbonization conversations."

From another perspective, it simply illustrates how far both parties have to go to enact meaningful climate legislation.

Alex Flint, who runs the pro-carbon-tax group Alliance For Market Solutions, said he couldn’t help but think that the current leaders of E&C "aren’t the folks who are going to deliver an eventual climate deal."

"A carbon price is the backbone of a serious climate proposal and E&C Democrats aren’t addressing it both because they don’t have or want to acknowledge that the most powerful climate tool is outside their jurisdiction and because they don’t want to raise the issue and impact their presidential candidates, etc.," Flint said in an email.

‘Some sort of carbon pricing’

Still, the E&C proposal would use a market-based mechanism to reduce emissions in the power sector.

The door is certainly not slammed shut for an economywide carbon price, and lawmakers stressed that there will be substantial additions and changes to the draft in the coming months.

Rep. Scott Peters (D-Calif.), an E&C member who stood with Pallone at the news conference, said a price on carbon "has to be part of any serious plan to address climate change." After all, a CES covers only the power sector.

"You have to do some sort of carbon pricing to affect economic decisionmaking throughout the economy," Peters said.

As it’s written now, the bill would use a variety of other tools, including a national climate bank and state-level plans administered through EPA to reduce emissions outside the power sector.

It was released as a detailed summary yesterday, and committee aides said the full draft text, which will be hundreds of pages long, will be publicly available later this month.

While lawmakers stressed that it could change in coming months, the draft would direct EPA to set more stringent emissions standards for vehicles and set emissions requirements for cement and steel purchased with federal dollars.

Whatever the mechanisms, the draft legislation offers a preview of the kinds of political forces Democrats will have to grapple with if they hope to sweep the elections and pass large-scale climate policy next year.

Even a top natural gas trade group was effectively neutral on the draft bill.

Nichole Francis Reynolds, vice president of government and public affairs for the Interstate Natural Gas Association of America, said in response that the organization would "look forward to continuing this conversation."

There’s also a wealth of other ideas that would have to come together across other jurisdictions. Perhaps most importantly, the House Select Committee on the Climate Crisis, led by Chairwoman Kathy Castor (D-Fla.), is set at the end of March to release climate policy recommendations, which will likely become a climate platform of sorts for leadership.

Opponents, meanwhile, are the strange bedfellows of progressive environmental groups and Republicans.

Brett Hartl, government affairs director at the Center for Biological Diversity, said the draft is "a complete moral abdication, and is shameful."

"By ignoring the pleas of scientists to take bold actions in the next decade, and by pretending fossil fuel production will just magically disappear, House Democrats are setting the world up for climate failure on an unimaginable scale," he said in a statement.

"The fires in Australia are proof that setting a goal of 2050 for action only puts 100 percent of the burden on the next generation and what’s left of our planet.’

Republicans, meanwhile, say the draft bill ticks all the boxes for opposition, even though some of their ideas, including from committee members such as Rep. David McKinley (R-W.Va.), were incorporated.

They’ve been complaining for weeks that Democrats left them out of the process, but they’ve also been driving solidly in their own lane.

The committee’s GOP has been pushing a package of 12 energy innovation-style bills to tackle greenhouse gas emissions, but they haven’t been interested in setting emissions targets or taking more aggressive steps.

E&C ranking member Greg Walden (R-Ore.) said moving bipartisan innovation bills first could lead to compromises down the road on more thorny climate issues, although he did not offer any specifics.

In essence, the GOP argument is that the big ideas on climate coming from Democrats will never become law.

Still, Walden called it a "hopeful sign" that the framework did not specifically call for a carbon tax, a proposal long loathed by many conservatives.

"If you look at the most recent data on the reduction in carbon emissions, we actually went down a couple percent. Most of that is attributed to less coal or natural gas. And so, you know, innovation in the energy sector matters," said Walden, repeating a point he has made repeatedly this Congress.

Democrats, however, said yesterday that their door is wide open if Republicans want to come to the table, and that they asked every member of the committee to participate.

In an ideal world, the draft bill would garner some Republican support, Pallone said. But the more ambitious elements wouldn’t be politically feasible without a Democratic president anyway, and for now, Pallone said, Democrats will move ahead where they can.

He may even be able to get parts of it to the House floor this year. Speaker Nancy Pelosi (D-Calif.) has said she wants to move a climate bill before the 2020 elections, and Majority Leader Steny Hoyer (D-Md.) said yesterday that it would be a "huge issue" over the coming year.

"Chairman Pallone is moving on this. Other committees are moving on it, as well, including the transportation infrastructure bill," Hoyer told reporters. "But we also expect a major recommendation coming out of Ms. Castor’s special committee in March."

Pallone, for his part, said he plans to ignore critics who say he’s wasting his time because climate legislation won’t pass the GOP Senate or get a signature from President Trump.

"What choice do we have? Australia is burning. We can’t just sit here and say, ‘Oh, the Republicans might not like this, or the president might not,’" Pallone said. "We’ve just got to keep going and see what we can get achieved."