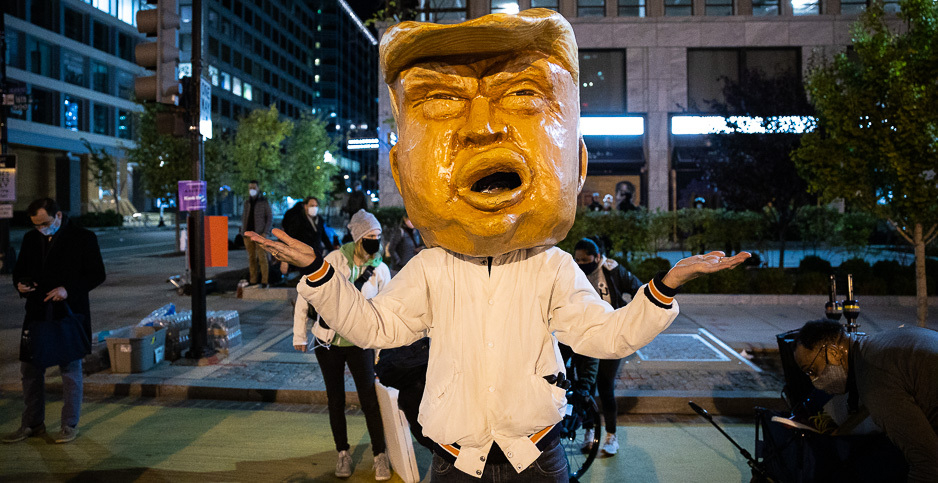 A demonstrator near the White House this week wearing a costume meant to depict President Trump. Francis Chung/E&E News

The last two days did not go how environmental groups expected.

After greens headed into Tuesday night with their political allies polling favorably, climate change in the news and record election spending, congressional Republicans look likely to hang on to the Senate and gain seats in the House.

The results could easily move in the coming hours and days. But even if Democratic nominee Joe Biden holds his lead and wins the White House, the path for the kind of ambitious climate legislation that environmentalists have long hoped for looks narrower than ever.

Still, the legislative grappling is set to begin in the coming days, as both environmentalists and industry position themselves to make the most out of whatever governing coalition emerges.

"While the exit polls, even Fox’s exit polls, seem to suggest that many voters care about climate, it still is not really the issue that drives any given race," said Brett Hartl, government affairs director at the Center for Biological Diversity.

Several environmental groups, including the Sierra Club, League of Conservation Voters and Sunrise Movement, were set to hold a joint press conference to discuss the results yesterday afternoon but instead postponed to today and issued a statement calling for every vote to be counted.

"The outcome of this election is up to the voters, no one else," the groups said in a combined statement.

"Voters — the majority of whom want to see bold, ambitious action on climate — turned out in record numbers across race, place of origin, and zip code to stand with and for each other."

Meanwhile, allies of President Trump claimed victory on energy issues, pointing to races in the heartland where pro-energy Democrats who won in 2018 lost their seats to Republicans, namely Reps. Xochitl Torres Small in New Mexico and Kendra Horn in Oklahoma.

"One thing is for certain: if Joe Biden shuffles into the White House, he will do so lacking any kind of mandate to make energy more expensive, restrict the use of our domestic natural resources, ban fracking on federal lands, or impose a carbon tax or other restrictive carbon policies on the American public," American Energy Alliance President Tom Pyle, who served on Trump’s 2016 transition team, said in a statement yesterday.

Green groups clung to a handful of victories yesterday. Reps. Sean Casten (D-Ill.) and Mike Levin (D-Calif.), both of whom ran on climate change in 2018, held on to their seats, as did Transportation and Infrastructure Chairman Peter DeFazio (D-Ore.).

Rep. Brian Fitzpatrick — a carbon tax supporter and the only Republican endorsed by the LCV this year — likely held off his challenger in Pennsylvania’s suburban Bucks County.

The most progressive supporters of the Green New Deal also, unsurprisingly, emerged unscathed, but environmental groups and Democrats took losses in swing districts around the country, particularly in Florida and Texas.

Gimenez’s win, as well as victories for Republicans active on climate and energy like Rep. Dan Crenshaw of Texas, made an encouraging two days, on the other hand, for conservative climate groups, which could also have a Republican Senate to work with.

While they lamented losing Sen. Cory Gardener (R-Colo.), who fell to former Democratic Gov. John Hickenlooper, the results were "an affirmation of the work we’ve been doing," said Quill Robinson, vice president of government affairs at the American Conservation Coalition.

"The take-home message for Republicans is that they need to be getting into issues that help them be more competitive," said Heather Reams, executive director of Citizens for Responsible Energy Solutions. "No one likes the nail biting."

Whatever happens in the next few days, environmental and industry groups are preparing for legislative and policy jockeying to come.

Should the GOP keep the Senate, Hartl said there’s little prospect for major climate legislation. If Biden is in the White House, that means the Center for Biological Diversity will turn its focus to the executive branch.

"We think that was always the primary area anyway," Hartl said, adding that Democrats would have had to grapple with moderates like Sens. Joe Manchin of West Virginia and Kyrsten Sinema of Arizona even if they had taken the Senate.

The key, Hartl said, would be for a Biden administration to act early and aggressively with existing air pollution tools under the Clean Air Act. Using the law to extend other air pollution standards could have the side effect of reducing greenhouse gas emissions, for instance.

"They should immediately revise all of the National Ambient Air Quality Standards super-aggressively," Hartl said.

In Congress, more centrist groups and industry interests are turning their attention to some of the outstanding innovation and tax proposals from the 116th Congress and to a potential infrastructure bill.

The U.S. Chamber of Commerce’s top lobbyist predicted yesterday that work on climate legislation will continue even in divided government, albeit more likely in a piecemeal fashion.

"The need to address climate change isn’t going away and only hastens with each passing day," Chamber Executive Vice President and Chief Policy Officer Neil Bradley told reporters on a conference call yesterday.

"I have no doubt this is going to be high on the priority list for Congress to begin addressing, and for an administration to address in different forms and fashion. It could be that it doesn’t take the form of one kind of comprehensive omnibus package. Instead … it becomes an element that is embedded in infrastructure."

He suggested that the House and Senate could meet "somewhere in the middle" on their competing infrastructure packages early in the new Congress, noting that the Senate’s $287 billion highway bill, S. 2302, includes a climate title and water provisions while House Democrats’ $1.5 trillion infrastructure package, H.R. 2, contains renewable energy investments and broadband provisions in addition to the traditional highway spending.

"It’s going to be that type of kind of compromise that reflects both resiliency, connectivity and advancing solutions on climate change, kind of wrapped together," Bradley said. "That’s where we think the sweet spot is in divided government in the first part of next year."

There are also murmurs about a potential deal for some type of clean energy standard framework that could regulate carbon emissions while also keeping natural gas online.

But a clean energy standard would be dead on arrival should Senate Republicans opt for an antagonistic approach to the Biden administration.

"Any type of thoughts around a national clean energy standard, low carbon standard or any other major policy intended to pursue a 0% carbon emission goal by 2035 … it’s hard for me to envision how you could get to that number without congressional action," Ethan Zindler, the head of Americas at BloombergNEF, said during a postelection webinar.

"And it’s harder for me still to envision the Congress, as we think it’s going to be made up, to be very cooperative on something like that next year," he added.

But in the postelection glow, some observers see signs for a bipartisan deal, especially as utilities already are adopting ambitious decarbonization goals that look to reach net-zero emissions by 2050.

What that looks like or its potential remains to be seen. There could be some bipartisan interest in tax extenders, like the 45Q credit for carbon capture; hydrogen fuels; biofuels; or a credit to enable energy storage technologies to qualify for the investment tax credit.

Any climate or energy deal would need to rely on cooperation between Majority Leader Mitch McConnell (R-Ky.) and Biden, a longtime creature of the Senate with a belief in the Senate’s ability to find compromise, Scott Segal, co-chair of Bracewell LLP’s Policy Resolution Group, said during a postelection webinar yesterday.

"On the major issues — tax packages, energy, climate change — we will see more modest attempts in my judgment in negotiated compromises, because that’s what an institutionalist like Joe Biden knows that is all he can get," Segal said.

"The opportunity to work across that aisle absolutely could work," he added.