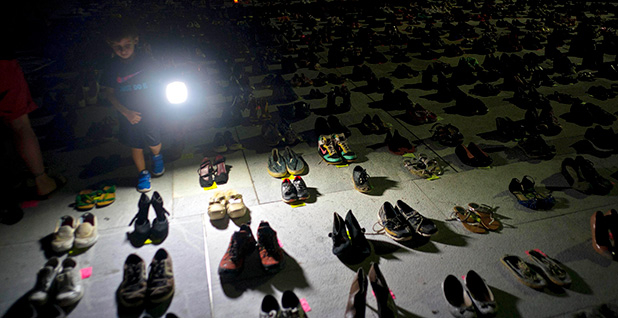 Hundreds of shoes outside the Puerto Rico Capitol in San Juan serve as a memorial for victims of Hurricane Maria. Ramon Espinosa/Associated Press

Puerto Rico’s Legislature has passed a historic bill to privatize its energy provider, the Puerto Rico Electric Power Authority (PREPA), a move that could transform the island’s electric grid or provide a new outlet for corruption.

At the same time, legislators backed away from a plan to disband the independent regulatory commission that oversees PREPA and instead approved a reorganization that increases the governor’s influence over it.

The stakes are high for the utility, the regulator and for Puerto Rico’s 3 million-plus residents.

The power grid remains fragile after Hurricane Maria destroyed it last year, leading to a long and painful recovery from the resulting blackout. With the existing grid barely functioning and PREPA deep in debt, privatization is a necessary but perilous path (Energywire, May 7).

On Monday, the territory’s House of Representatives passed a final version of the privatization bill and sent it to Gov. Ricardo Rosselló for his signature. It will face little resistance, since Rosselló and both chambers of the Legislature are controlled by the New Progressive Party, one of the island’s two main political parties.

The bill outlines a plan to sell off the commonwealth’s power plants and turn the distribution and transmission grid into a long-term concession, said Ramón Luis Nieves, a former Puerto Rican territorial senator who has seen the text of the bill.

The process will be managed by the Puerto Rico Public-Private Partnerships Authority, and individual proposals will need to get an up-or-down approval from the Puerto Rico Energy Commission within 15 days — a short time frame in the slow-moving world of energy regulation.

This framework comes with a key caveat. The Legislature will have 180 days to create a new comprehensive energy policy. If it fails to do that, the procedures under Puerto Rico’s existing energy laws will supersede the new law.

Nieves said that this strategy was in response to an unexpected announcement in May by Bruce Walker, the U.S. Department of Energy’s assistant secretary for the Office of Electricity Delivery and Energy Reliability. He told members of the U.S. Senate that DOE had contracted with the Southern States Energy Board to advise Puerto Rico on privatization. Puerto Rican officials are members of that board, which is an advisory body comprised of governors and legislators from Southern states as well as U.S. territories in the Atlantic.

"That caught everybody by surprise," Nieves said. "Nobody was aware that such an agreement had been signed."

Power at the commission

In the wake of that development, Nieves added, there has been a greater level of cooperation between two key Puerto Rican senators: Larry Seilhamer Rodríguez, a leader of the majority New Progressive Party and head of energy bill efforts, and Eduardo Bhatia, a member of the minority Popular Democratic Party who spearheaded a wave of energy reforms a few years ago.

Another provision of the privatization law expands the energy commission’s membership from three to five, a change that ensures that the governor will have a large influence over its membership.

The commission currently has just one member, meaning that under the new rules, the governor will be able to appoint four of the five.

One of those appointments was also filled Monday. The territorial Senate approved Rosselló’s choice, Edison Avilés Deliz, a Puerto Rican engineer and attorney, as the new commission president. He is expected to assume office next week, according to Ángel Rivera de la Cruz, the energy commission’s sole existing member.

The commission’s acting president, José Román Morales, an appointee of the prior governor, stepped down at the end of his term three weeks ago. Román was an outspoken advocate for the commission’s independence.

The commission has been active even as its fate wavered.

Last month, it issued path-breaking rules for the establishment of microgrids, which might help the island keep the lights on after the next big storm (Energywire, May 21). It also set a date of October for PREPA to submit a new integrated resource plan, a lengthy planning document that PREPA has resisted in the past.

Meanwhile, a much more far-reaching change to energy regulation on the island appears to have lost steam.

In January, Gov. Rosselló proposed disbanding the existing commission and folding it into a new super-regulator that would oversee energy, telecommunications and roads. That bill would have to reach a vote by the end of the legislative term at the end of this month, but it shows no signs of life.

That the energy commission will not only continue to exist but is an integral part of the new law bodes well for privatization, Nieves said. Other efforts to privatize large government entities in Puerto Rico have fallen victim to poorly written contracts and favoritism.

Last week, before the legislation was passed, government officials put out feelers to private industry in an unusual questionnaire.

The document from the Puerto Rico Public-Private Partnerships Authority, also known as P3, asked for input not only on what sort of projects the industry’s players would like to bid on but their views on whether and how they should be regulated.

"Please present your views regarding the structure and authority of the Puerto Rico Energy Commission," the document asked.

It requested feedback on what the commission should have the authority to approve, what metrics it should use, and when rates and plans should come up for review.

"There are very suspicious questions over there, with entities that could be regulated being asked what kind of regulation they would like," Nieves said. "That’s preposterous."

Rivera, the only current member of the energy commission, shrugged off the questionnaire and answers that industry might offer. "Our work and our commitment to the public interest, and the current statute, will continue," he said.