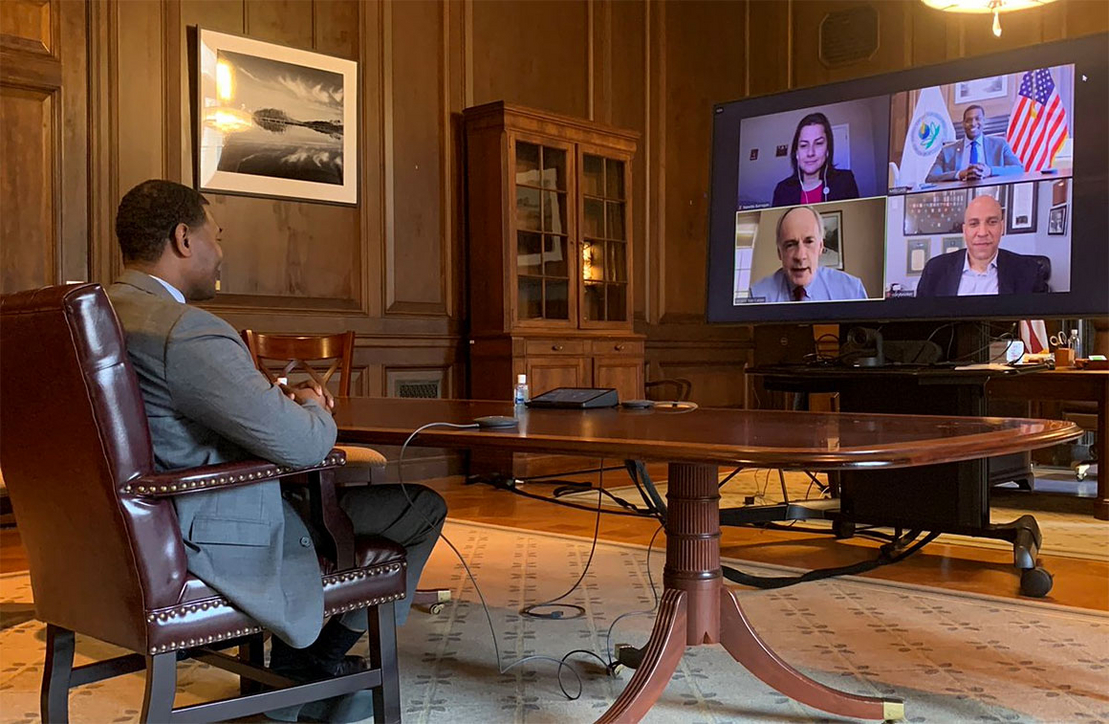 EPA spent thousands of dollars to revamp conference rooms as the agency came to grips with remote work during the COVID-19 pandemic.

The expenditure was so large, the agency alerted Congress as it updated aging video equipment used for virtual meetings, which have become much more common during the virus outbreak as many agency employees work from home. That move also showed EPA learned a lesson from the prior administration when Trump officials failed to give advance notice of then-Administrator Scott Pruitt’s secure phone booth, resulting in an embarrassing episode for the agency.

“I am writing to inform you that the EPA is planning to spend approximately $140,000 to upgrade audio-video equipment in 14 conference rooms under the control of the agency’s presidential appointees,” David Bloom, then EPA’s acting chief financial officer, told House and Senate appropriators overseeing the agency in a letter obtained by E&E News under the Freedom of Information Act.

EPA has since spent those funds, although much less than stated in the letter, dated March 30. The agency spent roughly $87,000 to upgrade the equipment in the 14 conference rooms, EPA spokesperson Tim Carroll told E&E News.

Carroll said EPA has used audio-video technology for many years to conduct virtual meetings with its workforce across the country, noting the improvements “are part of a larger effort to upgrade end-of-life, legacy equipment.”

“These upgrades were especially important due to the additional remote work required due to the COVID-19 pandemic,” said the EPA spokesperson.

Bloom’s letter also had details about the project.

“This new hardware integrates with the laptops and conference applications to provide seamless meetings and communications with remote employees,” Bloom said in the letter. “This will improve workforce communications and reduce the incidence of technical mishaps, such as feedback loops, distortions, video and audio interruptions and other communication issues.”

Faisal Amin is now EPA’s chief financial officer after he was confirmed by the Senate in June with Bloom serving as deputy in that office.

The vast majority of the EPA workforce has been teleworking since March 2020 to avoid exposure to the COVID-19 virus.

Consequently, over the past year, the agency’s computer systems have had to keep up to handle the greater workload with so many logging in from home. Also, several meetings at EPA that would have been conducted in person went online.

EPA Administrator Michael Regan has used a large video screen for virtual meetings in his office at agency headquarters in Washington, as captured on his Twitter account. That equipment dwarfs a laptop he had been using in the first days after he was sworn in as head of the agency.

Carroll with EPA confirmed the video screen Regan used for virtual meetings, as pictured in his tweets, is part of the upgraded audio-video equipment described in the letter.

Regan, EPA’s presidential appointees and agency staff have used the upgraded equipment. For the upgrades, the agency used contractors under an existing information technology contract, Carroll said. He called it “part of a routine upgrade” that was initiated in early January during the Trump administration before President Biden was inaugurated.

The work was not directed by any presidential appointee at EPA, according to the letter and the agency spokesperson.

‘Advance notice’ given to Capitol Hill

Bloom, in his letter, said the notice for spending on EPA’s conference rooms was being provided to comply with Section 710, a specific provision in appropriations law. Under that measure, no funds can be spent in excess of $5,000 to furnish or redecorate a presidential appointee’s office unless “advance notice” is transmitted to the House and Senate Appropriations committees.

Bloom also said in his letter, “While these rooms are under the presidential appointees’ control, they are widely used by all parts of the agency.”

Regarding the letter, Carroll, the EPA spokesperson, said the agency “notified Congress per the requirements of congressional appropriations language.”

Bloom’s letter was sent to the chairs and ranking members of the House and Senate Interior-Environment Appropriations subcommittees, which oversee EPA.

“These projects do not actually require congressional approval, as the funds will be used to upgrade general EPA facilities that will be widely used by all parts of the agency, not just the administrator’s or other presidential appointees’ personal offices,” Martina McLennan, a spokesperson for Sen. Jeff Merkley (D-Ore.), who chairs one of those subcommittees, told E&E News.

McLennan added, “Our understanding is that EPA proactively provided this notification out of an abundance of caution and transparency, given the recent history of renovations to EPA facilities that did not stand up to scrutiny under Scott Pruitt’s leadership during the Trump administration.”

Noting the committee examines this spending for compliance with the law, the Merkley spokesperson shared a Government Accountability Office opinion from 2018 that found EPA violated appropriations law when it failed to give lawmakers notice of excess spending to furnish Pruitt’s office with a secure phone booth.

The agency spent roughly $43,000 to install the communications facility, measuring at about 7 ½ feet tall, more than 4 feet wide and 3 ½ feet deep, according to an EPA letter sent to GAO. At the time, the agency pushed back against the ruling, arguing the phone booth was not decoration but was needed for the EPA administrator to conduct official business.

EPA has closely held details about the facility, only releasing a photo of the phone booth under a FOIA appeal by E&E News almost three years after it was initially requested (Greenwire, Aug. 31, 2020).

Further, the agency, deemed to have violated the Antideficiency Act related to the spending on the phone booth, was required to file a report on that violation with the president, Congress and GAO but hasn’t done so.

GAO spokesperson Chuck Young told E&E News that the watchdog office still has not yet received the report from EPA.

It, however, may be forthcoming. Carroll with EPA said, “The report is in interagency review, as required by OMB guidance.”