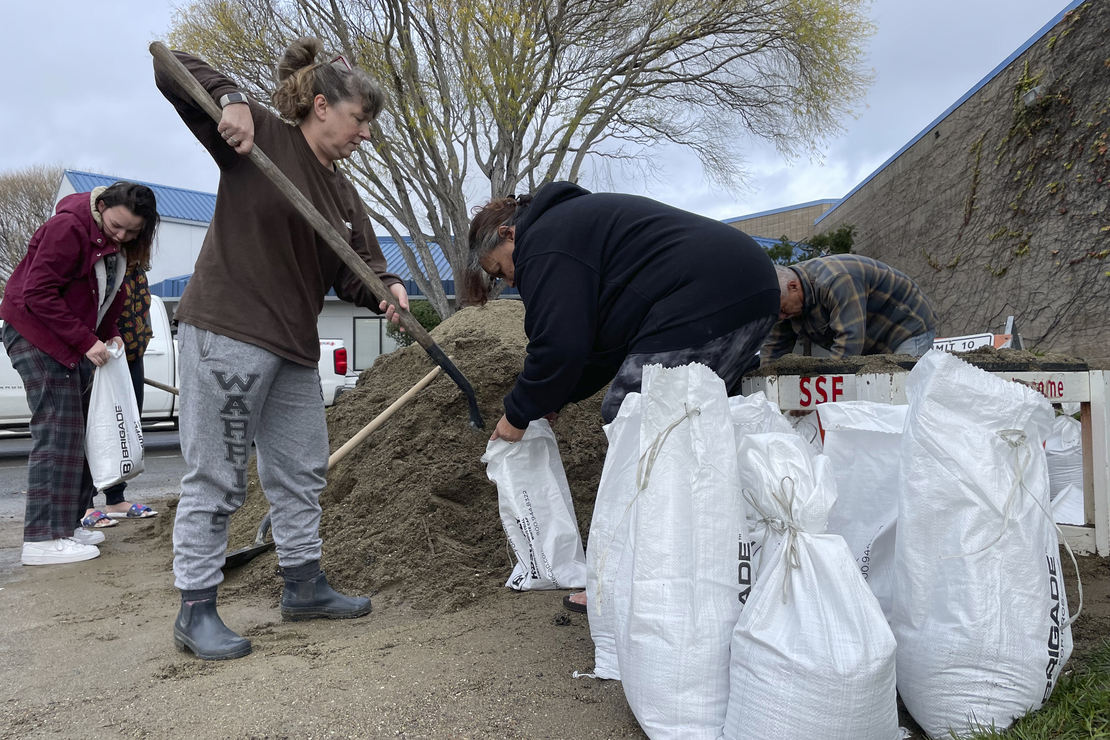 People fill sandbags Tuesday in preparation for the next storms outside a public works station in South San Francisco, Calif. Northern California residents are dealing with powerful storms that have already exposed vulnerabilities in a rural levee system. Haven Daley/AP Photo

A run of atmospheric rivers that have swollen California streams to record levels and breached some of the state’s crucial levees shows no sign of easing up, leaving farms and residences vulnerable for what could be another week or more.

Multiple deaths have already been linked to the series of storms, including that of a young Sonoma County child whose family’s doublewide trailer home was crushed Wednesday night by a falling tree.

An estimated 190,000 California residents had lost power Thursday morning, some heavily trafficked highway stretches have been closed and evacuation orders have been issued for several towns. California Gov. Gavin Newsom (D) has declared a state of emergency.

“We anticipate that this may be one of the most challenging and impactful series of storms to touch down in California in the last five years,” Nancy Ward, who was appointed Dec. 31 as director of the California Governor’s Office of Emergency Services, said at a news briefing.

Ward added that the storms “may continue for the next seven to 10 days” and that if this happens as anticipated “we could see widespread flooding, mudslides and power outages in many communities.”

Streamflow measurements in Northern California between Dec. 31 and Jan. 2 recorded 13 preliminary record-high levels, according to the U.S. Geological Survey. Near Sacramento, water tumbled by at a stunning 63,700 cubic feet per second along a stretch of the Cosumnes River.

The high waters breached levees at multiple locations along the river near the town of Wilton, with several of the breaks that started last weekend spanning at least 2,000 feet.

On Wednesday afternoon, Sacramento County officials reported finding a body in a submerged vehicle west of the town of Galt. It was at least the third person found dead in a flooded part of south Sacramento County, according to The Sacramento Bee. The death of the child in Sonoma County was reported by Santa Rosa’s Press Democrat.

“Heavy rains and hazardous weather conditions continue in Northern California this week,” said Mark Dickman, associate director of data for the USGS Water Science Center. “Streamflows have been very high, and we expect more over parts of the region the next several days.”

Atmospheric rivers are long columns of water vapor that produce heavy rain during winters in California. They are ranked on a scale of 1 to 5 based on the amount of water vapor they carry and their duration.

The most recent atmospheric rivers hitting California have been characterized as Category 3, but they have also come one after another.

“This is an extreme weather event, and we’re moving from extreme drought to extreme flood,” Karla Nemeth, director of the California Department of Water Resources, told reporters at a briefing Wednesday.

Nemeth added that this double-whammy means that “after three years of intensive drought, the ground is saturated and there is significant chance of downed trees that will create significant problems.”

In the crucial Sacramento-San Joaquin River Delta, notably, a somewhat ad hoc network of over 1,100 miles of levees, many of them more than a century old, seek to contain flows where the two rivers meet.

There have been at least 162 Delta levee failures during the past century, according to the state Department of Water Resources. Most of these levee failures have led to the flooding of islands within the delta.

In recent days, California officials have deployed equipment to 49 locations statewide, along with levee inspectors and flood-fighting specialists.

The heavy precipitation has not been all grim, as the state’s first snow survey of the season on Jan. 3 found 55.5 inches of snow depth at one Sierra Nevada location, which is 177 percent of average for the site.

Statewide, the snowpack is 174 percent of average for this date.