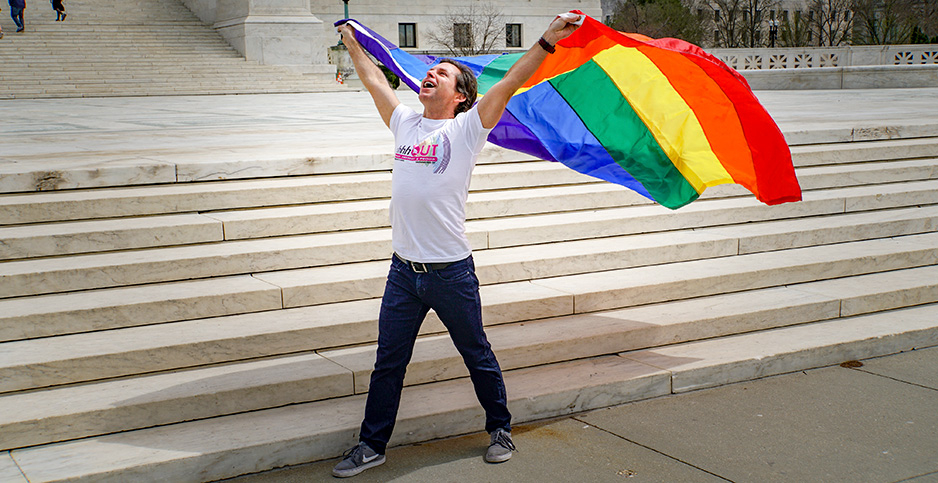 A landmark Supreme Court decision this week that affirmed protections for lesbian, gay, bisexual and transgender employees in the workplace could provide powerful ammunition for climate litigators.

In a 6-3 opinion Monday, Justice Neil Gorsuch wrote that Title VII of the Civil Rights Act protects "all persons" from discrimination based on sex, including sexual orientation and gender identity. Employees, the court found, can therefore not be fired from their jobs simply for being gay or transgender.

"[The] decision in today’s case will surely be used to try to persuade [Gorsuch] that broad regulation of greenhouse gases under the Clean Air Act is squarely within the plain text of the statute," she wrote.

The justice, President Trump’s first appointee to the nation’s highest court, relied on the plain meaning of the law — or textualism — in deciding Bostock. He wrote that there is "no contest" between the express language of the Civil Rights Act and the limits of the authors’ understanding of what the 1964 law might eventually mean.

"Only the written word is the law," Gorsuch wrote, "and all persons are entitled to its benefit."

Textualism was a favored reasoning method for the late Justice Antonin Scalia, who used it to "suit his policy preferences," said Bob Percival, director of the University of Maryland’s environmental law program.

He called the Bostock decision a "wonderful surprise."

"What Gorsuch did in Bostock is to apply Scalia’s approach in a manner that was faithful to the text of Title VII," said Percival. Carlson, he continued, "is certainly right that Gorsuch’s reasoning is fully applicable to the Clean Air Act, and it may suggest that he would have an open mind on the issue."

In the 2007 case, the Supreme Court acknowledged that Congress crafted the Clean Air Act with "unknown unknowns" in mind and said that the plain text of the statute left room for EPA to make decisions, such as whether to regulate greenhouse gas emissions as air pollutants, based on new scientific understanding, said Goffman.

Something similar happened in Gorsuch’s reading of the Civil Rights Act, the former EPA official added.

"The language of the statute was crafted in a way so that it could accommodate situations that were not necessarily anticipated by Congress at the time the language was crafted, but which the statue could still cover as, in this case, society’s understanding of the issue evolved," Goffman said.

‘Judges may not rewrite the law’

His opinion offers a glimpse of his views on the limits of statutory interpretation.

"Congress has considered numerous bills to prohibit employment discrimination based on sexual orientation," Kavanaugh wrote. "But … it has not yet shouldered a bill over the legislative finish line.

"In the face of the unsuccessful legislative efforts (so far) to prohibit sexual orientation discrimination," he continued, "judges may not rewrite the law simply because of their own policy views."

The court’s most junior justice has previously expressed interest in reviving the nondelegation doctrine, which says agencies can’t make policy decisions — like whether to regulate climate change — that properly fall to Congress (Energywire, Dec. 9, 2019).

The nondelegation question will be a critical consideration in any future litigation dealing with emissions standards, said Jonathan Adler, a law professor at Case Western Reserve University.

"I don’t think there’s anything in the Bostock opinion that would stop a Justice Gorsuch or other members of the court who are concerned about delegation from seeing such concerns in a proper case," Adler said.

Carlson of UCLA acknowledged that Bostock doesn’t address nondelegation issues that could arise in a potential Clean Air Act case, but she wrote in an email that the opinion this week could have bearing on multiple climate cases currently pending in federal courts.

"I would predict that we’ll see these arguments raised in the car standards case, the California waiver case, and the challenge to the [Affordable Clean Energy] rule," Carlson wrote.

"In fact I think we’ll see reliance on Bostock in any case involving the application of the Clean Air Act to greenhouse gas emissions."