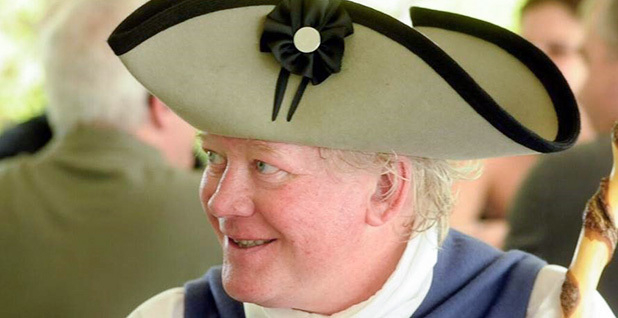 Philip Zoebisch, who's opposing EPA's Clean Power Plan in court, volunteers as a "town crier" for a colonial museum in Haddonfield, N.J. Photo by Scott Anderson.

Philip Zoebisch, a libertarian office manager in New Jersey, is hoping to be the first person heard by a panel of judges when oral arguments over a major climate change rule kick off in June.

Zoebisch (whose name rhymes with "soap dish") filed a request this week asking for seven minutes to argue against the science underpinning the Obama administration’s Clean Power Plan.

He’s one of hundreds involved in the lawsuit against U.S. EPA’s rule to limit greenhouse gas emissions from power plants. He filed a "friend of the court" brief in the consolidated case. But unlike many other parties in the case who argue that EPA misused the Clean Air Act, violated the Constitution and impeded on the turf of Congress and states, Zoebisch says his argument is simpler.

"This could be a one day case," he wrote to the U.S. Court of Appeals for the District of Columbia Circuit.

He is "challenging the underlying science of Global Warming, specifically that there is no scientific study determining normal temperature upon which to measure increases," he said. He called it "fraud" for EPA to base a climate change argument on an "unscientific normal temperature."

"Why go through a long and prolonged trial if the EPA cannot produce a scientific study determining normal temperature?" he wrote.

Zoebisch told the court he "would very much appreciate being first so that I can go home." He will be the only person in the courtroom "who is not being paid to be there. This is on my dime," he said.

He’ll have to take the day off work from his job as an office manager for an international lawyer in Haddonfield, N.J., to attend the oral argument scheduled for June 2, Zoebisch said yesterday in an interview.

The Obama administration believes its rule is solid on both scientific and legal grounds.

"CO2 and other greenhouse gases in the atmosphere have risen to unprecedented levels as a result of human activities, and these gases are the root cause of ongoing global climate change," EPA said in its brief to the court. The agency said it has "comprehensively assessed the effects of greenhouse gas pollution, concluding that it endangers the public health and welfare of current and future generations and thus requires [Clean Air Act] regulation."

It appears unlikely, however, that Zoebisch will be allotted any time to argue before the court in the massive case where dozens of lawyers will be vying to speak.

According to the court’s rules, amici curiae, or "friends of the court," won’t be permitted to participate in oral argument unless the court grants it for "extraordinary reasons." The other lawyers challenging EPA’s rule also could consent to his participation, but that also seems unlikely, given that time will be at a premium.

‘I love the environment, but I hate bad science’

Zoebisch isn’t a scientist, but he thinks that helps his case against the Clean Power Plan.

"Anyone who denies climate change is excommunicated from the community and you can’t get a job," he said. "That’s one of my skills in being able to write this — I don’t have a vested interest in it."

He got interested in the topic about 40 years ago. He remembers reading a 1975 Newsweek story that pointed to a trend of global cooling. That article has long been cited by critics of climate science that points to a warming trend.

He calls the science underpinning climate rules "fraudulent" and wants the court to demand a scientific study from EPA determining the "normal temperature."

"You can’t make a court decision involving billions of dollars based on alchemy," he said. "You can’t judge a court case based on astrology."

Zoebisch is originally from Ardmore, Pa. He went to Lower Merion High School, which he notes is "where some basketball player went." Former NBA star Kobe Bryant attended the same school.

Zoebisch has an undergraduate degree in international economics from Carleton College in Minnesota and an MBA in finance from Columbia University, he said. He’s also an Eagle Scout who grew up camping. "I love the environment, but I hate bad science," he said.

He has lived all around the country, including New York, San Diego, Washington, D.C., and now Collingswood, N.J., and held a variety of jobs. He did a financial internship in Brussels, was a marketing director for a credit union and built equestrian facilities out in California, he said.

"I’ve done some of everything," Zoebisch said. "I’m a jack of all trades, master of none."

In 1996, he ran for Congress as a libertarian, hoping to unseat Democratic Rep. Bob Filner in the district representing southern San Diego County.

Zoebisch got 1 percent of the vote, according to the Los Angeles Times. "I spent about $100 on my campaign; he spent $1.8 million, and he beat me," Zoebisch said.

Zoebisch still considers himself a libertarian, but he’s not politically active anymore, he said. He’s now a registered Democrat. He isn’t sure yet whom he’ll vote for in the presidential election, but he plans to vote for Bernie Sanders in the primary.

Sanders’ stance as an advocate of climate regulations isn’t a deterrent, Zoebisch said. "I’m not a single-issue person," he said.

Zoebisch hasn’t been a fan of the Obama administration. "I think he’s the worst president we’ve had," he said. "He’s adversarial. He says if you don’t vote for his communist ideas, then you refuse to compromise."

His filing in the Clean Power Plan case isn’t his first foray into the legal system.

More than a decade ago, he was part of a failed attempt to challenge costs imposed by the construction of the San Diego Padres ballpark. He also was involved in a lawsuit over government complaints that he had failed to repay student loan debts, where the government agreed to pay him after he launched a counterclaim. He also challenged the Collingswood, N.J., fire department, claiming that officials had illegally searched his apartment without a warrant, he said.

"I hired a lawyer and they lost, of course, because they can’t do that," he said.

"It’s not like I’m litigious right and left," he said. "I was always right."

Outside of work and courtroom appearances, Zoebisch spends time volunteering as a "town crier" for a colonial museum. He’s also president of the Delaware Valley chapter of an amateur ballroom dancing association and cross-trains with golf, tennis and bicycling.

His favorite dances are the waltz, fox trot, tango and cha-cha, he said. He dances two or three times a week, and the chapter has a dance every Sunday night in the annex of a church, but he’s not in it to compete.