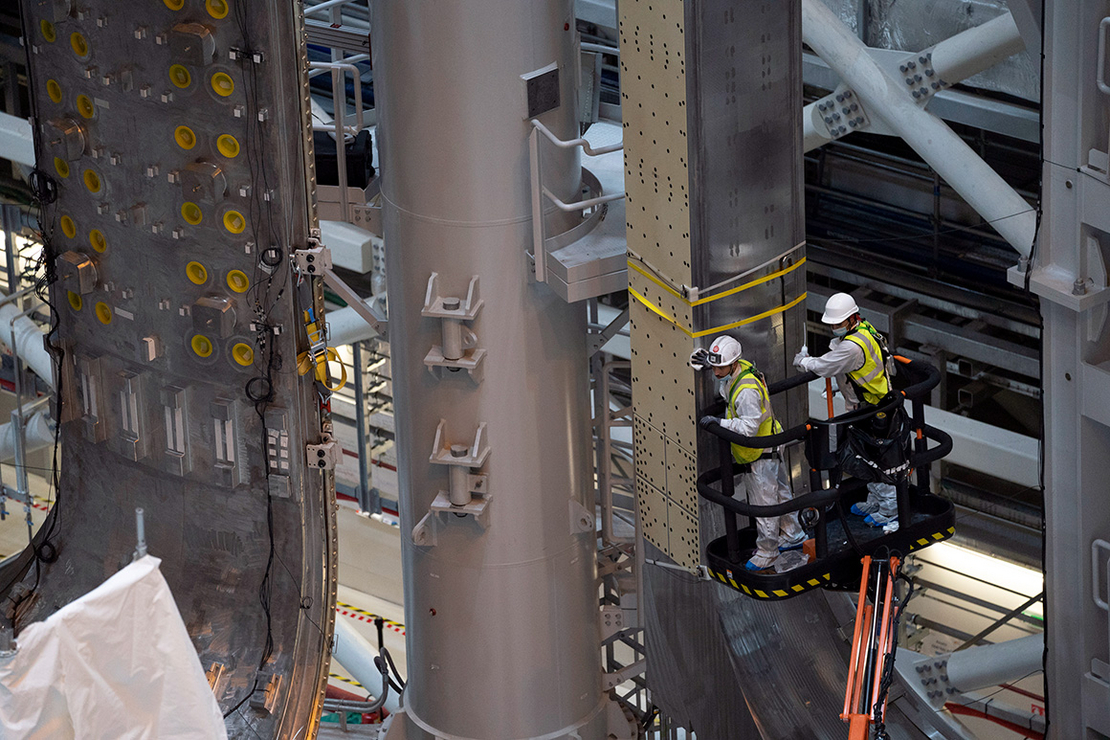 Workers inspecting components of the ITER fusion reactor being built in Saint-Paul-lès-Durance, France, in September. White House officials yesterday promoted the use of fusion as a carbon-free source of energy. AP Photo/Daniel Cole

President Biden wants the warmth of many suns to power American homes and businesses.

The White House held a summit yesterday on fusion, which could someday become a major source of carbon-free energy. Fusion is made by pressing atoms together to create heavier ones. Nuclear fusion is the energy process that powers stars, with a low radiation and tremendous energy output.

Critics have long claimed that fusion energy, scientifically possible but commercially challenging, is decades away from powering homes or businesses. But the Biden administration, and a growing cadre of risk-taking investors, see fusion as an important tool on the path to an economy with net-zero greenhouse gas emissions by 2050.

“We can lead the world with new energies and innovation and that is exactly what we are doing and why we are gathered here today,” White House climate adviser Gina McCarthy said. “We have to act on climate change so our country can win the 21st-century economy, and that’s what fusion helps to present us with — tremendous opportunities as well as challenges we know.”

The Department of Energy will now coordinate all of its fusion energy research to advance the technology for “possible” deployment by the end of the decade, Energy Secretary Jennifer Granholm said.

The latest $1.5 trillion appropriations bill from Congress included $45 million for a new fusion program in which private companies will partner with DOE to build new fusion energy devices. It’s part of a record investment in fusion that will send more than $700 million to DOE’s Fusion Energy Sciences program.

But Granholm tamped down expectations for when fusion will be deployed as a new carbon-free energy source.

“We’ve got to manage expectations, as well. There’s a reason why fusion is hard. So it’s going to take time: Even as we are making amazing progress, we have to be careful about overpromising, and we have to be realistic,” she said.

Still, the last year alone has seen a series of milestones in fusion energy research.

A Chinese project achieved fusion reactions for 17 minutes at 126 million degrees Fahrenheit, which is five times hotter than the sun, according to the White House. DOE’s Lawrence Livermore National Laboratory achieved a “burning plasma” reaction, which demonstrated for the first time in any research facility a fusion reaction in which more energy was generated from the process than was required to initiate it (Energywire, Jan. 27). A European effort achieved a five-second, high-power pulse, which broke a 24-year-old record by doubling it.

The White House event framed fusion energy as a complementary energy source to renewable sources on the energy grid of the future.

“We need firm energy resources, ones that you can turn on when the wind doesn’t blow and the sun doesn’t shine,” said Steven Cowley, director of the Princeton Plasma Physics Laboratory.

The White House views its boost of the fusion initiative as part of Biden’s pledge to use climate policy as a jobs creator. There are more than 30 fusion companies worldwide, most of which were formed in the last decade, and about two-thirds of which are based in the United States, according to the White House.

The event featured leaders from some of the investors and corporate leaders seeking to profit from what would be a major emissions-free energy breakthrough.

Fusion energy “is exciting, and it will solve climate change,” said Carly Anderson, a partner at Prime Movers Lab. “But we’re here because there is a business opportunity here to really create the economy of the 21st century, and we want to be part of it.”

Her venture capital firm has invested in Commonwealth Fusion Systems, whose CEO also spoke at the White House event, and Focused Energy, another fusion startup.

Other fusion backers include major investment firms like Goldman Sachs Group Inc., BlackRock Inc. and KKR & Co. Inc. as well as the sovereign wealth funds of Singapore, Kuwait and Malaysia, according to PitchBook.

“One of the major contributors to the growth of all these companies has been the fact that fund sizes have grown,” said AJ Kantor, the chief of staff at Zap Energy. Fund managers now “need to make really big bets” in order to get sizable returns on their investments, she said.

“This is one of the few industries where you can build really megalithic companies,” Kantor added. That potential upside and the growing pool of investment dollars have “really translated to venture capital being willing to put money behind this stuff,” she said.

The White House panel also included the heads of Helion Energy, which was founded in 2013 and is now valued at more than $3.7 billion, and TAE Technologies, a Google-backed fusion pioneer that’s been trying to commercialize the process since 1998 (Climatewire, Aug. 24, 2020).

“Some of the companies next to me, and some of the others around the country and around the world, are building proof-of-concept machines — machines that will show that fusion works,” said Andrew Holland, the CEO of the Fusion Industry Association. “We call this our Kitty Hawk moment: not the time when you sell the airplane, but the time when the airplane flies.”

Holland predicted that the industry’s main challenge in the 2030s wouldn’t be “a scientific problem or even an engineering problem, but a manufacturing problem. How fast can you build?”

Other panelists were more cautious about setting lofty expectations that the industry may not be able to meet.

“The reason that fusion has always seemed 20 years away is because there’s a hype cycle and people are consistently disappointed,” said Kantor of Zap Energy. “If we miss these goals, we’re looking at perpetuating that adage. So it’s time for us to hustle.”