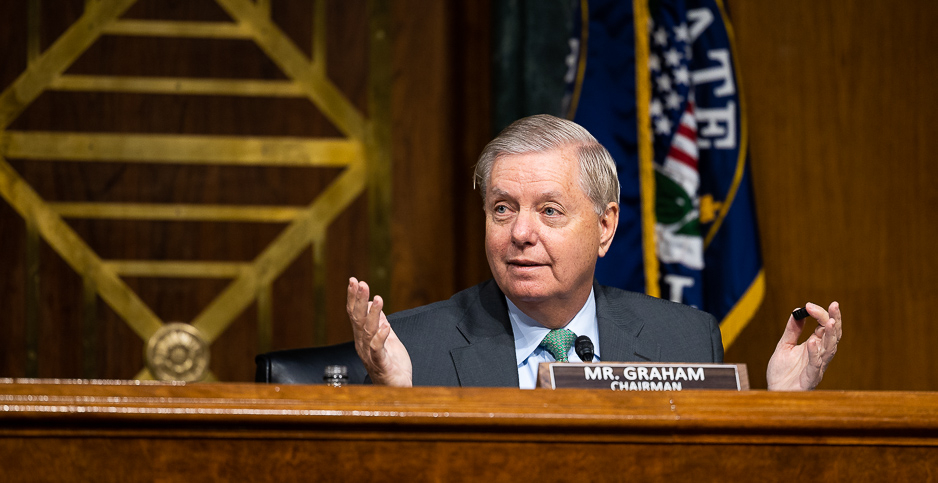 Sen. Lindsey Graham (R-S.C.) says senators should have a say on whether the U.S. rejoins the Paris climate deal. Francis Chung/E&E News

Graham tweeted that he is "working hard to secure a vote in the U.S. Senate" on the Iran nuclear deal, another Obama-era agreement that President Trump pulled out of early in his term.

"Also believe Senate should be on record in support or opposition to any decision to reenter Paris Climate Accord," Graham said. "As currently drafted, the Accord is a big win for China and India."

Paris is likely to be a centerpiece of the back-and-forth messaging on climate next year, since reentering the agreement is one of the few actions Biden will be able to take without approval from Congress and before potentially contentious confirmation fights for his EPA and Interior nominees.

The Biden administration will also be expected to announce a new nationally determined contribution (NDC) with more ambitious emissions targets, which would likely face opposition from the GOP.

A Senate vote on Paris would revive old arguments for Republicans, who for years have opposed the agreement for being too favorable to India and China and because they believe it should have been sent to the Senate for ratification.

Sens. Jim Inhofe (R-Okla.), Mike Lee (R-Utah) and Rand Paul (R-Ky.) all filed resolutions in 2015 as negotiators were finishing the agreement expressing that it should be subject to Senate ratification, as did several House Republicans, though none received a vote, according to the Congressional Research Service.

Should they control the Senate after the Georgia runoffs next month, Republicans could also largely stymy new efforts to address climate change and meet the nation’s Paris goals, outside of regulatory changes by the Biden administration.

Paris is a subsidiary agreement to the United Nations Framework Convention on Climate Change, which the Senate ratified in 1992.

And while the United States’ initial NDC — to reduce emissions 26% to 28% by 2025 — was more ambitious than developing nations’, the targets are nonbinding.