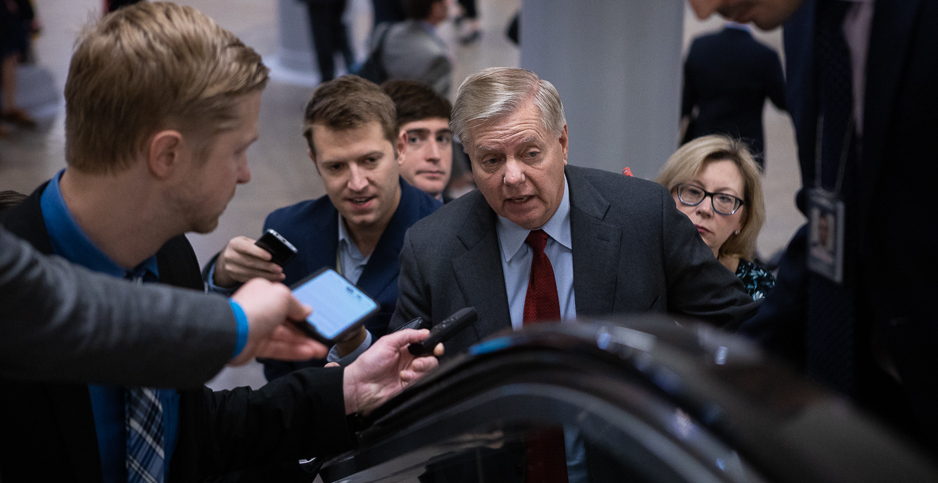 Sen. Lindsey Graham’s commitment to environmental protection is in question as he fights in what’s shaping up to be his toughest election yet.

The South Carolina Republican was once known as the Senate GOP’s most vocal advocate for tackling climate change. A decade ago, he scandalized his party by working with Democrats on a doomed, bipartisan climate bill incorporating elements of cap and trade.

Still, Graham’s opponent — former South Carolina Democratic Party Chairman Jaime Harrison — is making the environment a campaign issue, along with pointing at inconsistencies in Graham’s positions over the years.

"[Graham] believes climate change is real. Well, that ain’t good enough if we don’t do something affirmatively in order to address the issue of the climate," Harrison said from the debate stage at Allen University in Columbia, S.C., on Saturday night.

The environment is far from the front-and-center issue in the Graham-Harrison contest, especially with the Supreme Court vacancy. Graham is playing a central role as chairman of the Judiciary Committee.

In fact, when Graham and Harrison faced off Saturday night for their first of three debates, the candidates were only asked one question about where they stood on environmental policy solutions.

"There is a particular pride of place that goes with South Carolina and South Carolinians, a real tie to the land and our agrarian roots … but I don’t think it becomes a linchpin issue here as perhaps the 1st District," said Mark Sanford, former South Carolina Republican congressman and two-term governor.

Sanford was referring to the competitive congressional race in the state’s coastal low country that he once represented and still calls home.

Nonetheless, the debate question gave Harrison the opportunity to draw from the script he and his supporters in the environmental community have been deploying on the sidelines for months — one that paints Graham as ultimately unwilling to do what it takes to protect the state from dangers like rising sea levels, oil spills from offshore drilling and drinking water contamination.

Graham’s foes are framing the veteran lawmaker’s record on the environment in the same vein as they are his record on immigration, health care and President Trump: Graham used to be a moderate consensus-builder, and now he just panders to the right.

"There are many things you can point to to show voters you can’t trust Lindsey Graham, whether it’s happening right now with the Supreme Court or his inconsistency on climate change and offshore," said Craig Auster, senior director of political affairs at the League of Conservation Voters, which has endorsed Harrison.

Graham famously said in 2016 that the Senate should not seat a new Supreme Court justice in an election year. Now, four years later, Graham is rushing to seat Supreme Court nominee Amy Coney Barrett before Nov. 3.

"Lindsey Graham has had the opportunities many times to do the right thing for our environment," Auster added. "He could be doing a lot more to protect South Carolina’s environment, and he’s not."

Whether Graham could have done more to protect the environment since his election to Congress in 1994 is an open question.

What is indisputable, however, is that Graham has talked about the environment when other Republicans have either demurred on the subject or flat out refused to engage.

Even in 2020, as a growing number of conservatives are becoming more comfortable conceding there’s work to do to address the reality of global warming, Graham remains something of an outlier in his party by saying consistently, and without equivocation, that he believes in the science of climate change.

"Climate change is real," he reiterated, more than once, at Saturday’s debate.

Graham has also said the Republican Party will suffer if its members refuse to acknowledge climate change and come up with solutions (Energywire, April 26, 2019).

In 2009, Graham began working furiously with then-Sens. John Kerry, a Massachusetts Democrat, and Joe Lieberman, a Connecticut independent, on climate legislation built around a "hybrid system of the old cap-and-trade system" (Greenwire, Feb. 3, 2010).

It was a bold move for a Republican from a red state, as the House had recently passed a cap-and-trade bill that would go on to help cost the Democrats their majority control in the chamber for the next eight years. Graham was even censured by the Charleston County GOP for his efforts (Greenwire, Nov. 12, 2009).

By early 2010, Graham walked away from the table, saying that unrelated political disagreements with Senate Democratic leadership poisoned the prospect of compromise. Still, in 2014, EDF Action hosted a fundraiser for Graham’s reelection campaign.

Three years later, Graham was one of just three Republicans to vote against a congressional repeal of the Obama administration’s rules on methane emissions from oil and gas operations on federal land.

Last month, he accompanied Trump to Florida for the announcement that the president would be implementing a 10-year moratorium on oil and gas drilling off the coasts of three states, including South Carolina — and took credit for helping secure the commitment.

"Great News for South Carolina," Graham said in a statement. "This issue has been a long time coming and I have worked extensively with President Trump about [it]."

On Saturday night, Graham cited his membership in the bipartisan Senate Climate Solutions Caucus as an example of where he has bucked his party’s leadership.

He also has frequently pointed to his involvement in the creation of the Roosevelt Conservation Caucus in 2019 as another indication of his engagement on environmental issues.

Neither caucus, however, has a track record of producing tangible, concrete legislative accomplishments.

It’s worth putting Graham’s rhetoric and actions in the context of attitudes toward the environment and climate change in his home state, particularly among his Republican base.

In a public opinion survey of South Carolina residents conducted in early 2019 by Winthrop University, 79% of respondents said the state needs to do more to address the effects of climate change.

However, 22% of respondents said climate change was being driven by natural causes, and 29% said humans were to blame.

For respondents who identified as leaning Republican, when asked what was causing climate change, 35% cited natural phenomena and 11% attributed human activity as the cause of climate change.

In a sign of just how inhospitable South Carolina conservatives can be to an environmental agenda like Graham’s, state Rep. Nathan Ballentine, in a virtual panel convened on the occasion of National Clean Energy Week, recommended fellow Republicans in the Palmetto State tread carefully when advocating for a green agenda.

"You’ve got to be prepared for labels and buzzwords. Certainly never mention climate change," said Ballentine, a Republican who works on clean energy policy in the South Carolina Statehouse.

“His positions reflect the priority South Carolinians put on the environment.”

Graham’s time in Congress has also been notable for his advocacy within the GOP, Dillon argued.

Still, Graham’s approach to combating climate change is not one favored by the environmentalists who are now lining up behind Harrison and are giving the Democratic candidate an opening to draw a contrast.

And while the Climate Solutions Caucus has an innocuous-sounding name, it represents a contingent of more moderate lawmakers who are more interested in finding "market-based solutions" to the climate crisis rather than imposing the kinds of industry regulations more progressive environmental advocates think are necessary to rein in bad actors.

"I do believe in private-sector solutions. I believe in the government working with the private sector. We’ve lowered our carbon emissions. I believe more electric cars are coming. But my solution to the environment is not to destroy the economy," Graham said at the debate over the weekend. "I will never, ever destroy the economy in the name of helping the environment."

But the League of Conservation Voters’ environmental scorecard — the yardstick by which mainstream greens measure lawmakers — has Graham with a 29% rating for climate votes in 2019 and a score of 13% spanning his entire congressional career. The Vote Climate U.S. political action committee gave him a rosier lifetime rating of 37.5%.

Harrison has never held public office before and therefore has no formal record of supporting or opposing major environmental priorities through the legislative process. However, his supporters are confident he will be a more loyal ally than Graham.

"We endorsed Jaime Harrison because he is a really exciting candidate who is really committed to addressing climate and environmental justice, and he has been out there on the campaign trail drawing attention to these issues, the needs to protect and provide clean water for all people, visiting places like Denmark," said the LCV’s Auster, referring to the South Carolina city plagued by contaminated drinking water.

"He’s also been really strong and consistent in talking about opposing offshore drilling, which is a threat to South Carolina’s environment and economy and people’s livelihoods," Auster continued.

Harrison said his environmental priorities in the race include protecting South Carolina from offshore drilling and the impacts of climate change.

"I will say what Lindsey Graham is still too afraid to say: Congress should ban offshore drilling," he told E&E News in a statement.

"Meanwhile, South Carolina is on the front lines of climate change, with low-lying areas experiencing sea level rise and more frequent flooding that damages homes, businesses, and roads — even on sunny days. As senator, I will help America win the clean energy race, creating countless high-paying jobs and cleaning up our air in the process," he said.

E&E News requested comment and elaboration from Graham’s campaign on his environmental record and accomplishments. The senator’s campaign did not provide responses.

‘Not going to be an Ed Markey’

In addition to LCV, Harrison has endorsements from the Sierra Club, the NRDC Action Fund, Climate Hawks Vote and Friends of the Earth Action. EDF Action is not getting involved in either campaign this year.

"I think Harrison is awesome. He’s not going to be an Ed Markey or Brian Schatz, but he’s going to be standing up for clean energy jobs," said RL Miller, founder of Climate Hawks Vote, referring to two Senate Democratic environmental stalwarts from Massachusetts and Hawaii, respectively. "I think this is a sleeper race where Democrats have a shot."

“I think this is a sleeper race where Democrats have a shot.”

The environmental left’s embrace of Harrison comes despite the fact that he refuses to endorse a crown jewel of progressive causes, the Green New Deal, saying at the Saturday debate the plan is "too expensive" and "too partisan."

Harrison has additional baggage from his previous job at the Podesta Group, where he advocated for some fossil fuel interests. He lobbied for BP PLC from 2010 to 2011 and for the American Coalition for Clean Coal Electricity from 2009 to 2011.

While Harrison’s campaign provided a statement to E&E News on the candidate’s position on the environment, it did not respond to a request for comment on his fossil fuel work and how that might complicate his support from progressives.

But Harrison, who grew up poor, has defended his Podesta Group job by saying he had to support his family and pay off student loan debt.

"I have two boys that I take care of, along with my wife," Harrison said Saturday night when Graham attacked him for raking in a sizable lobbying income. "I also have a grandmother who’s elderly, who I help pay bills. I also have a mom who was foreclosed on her home, and I helped her as well."

At the debate Saturday, calling the environment "the greatest gift that the Lord gave us," Harrison turned back to his opponent when Graham gave the examples of climate change and immigration as areas where he has maintained his independence from the GOP.

"You’ve been in Washington for 25 years," Harrison said. "Those are issues that still have not been addressed."