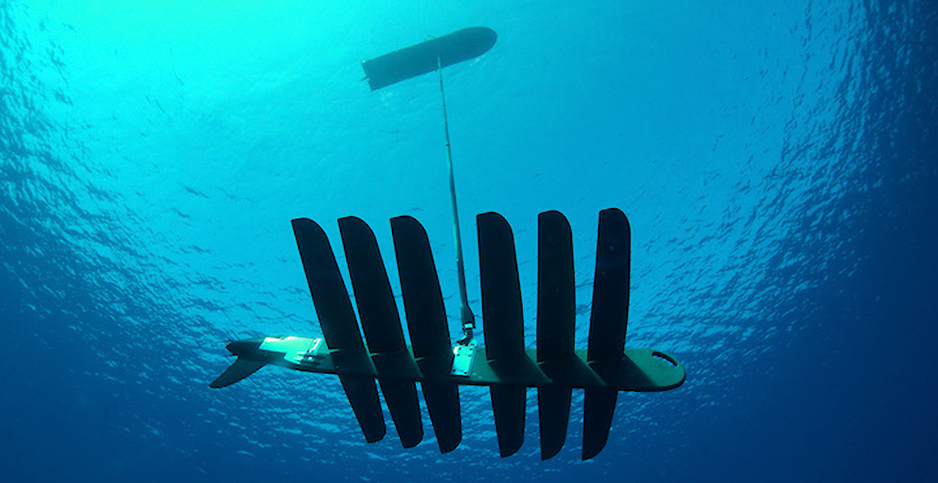 The Wave Glider is a surfboard-size robot that travels the sea to collect data for studying everything from climate change to national security. Liquid Robotics.

They are classic examples of inventors stumbling across an innovation while looking for something else. Take the case of Joe Rizzi, an engineer, venture capitalist and ukulele player who lives on the ocean in Puako, Hawaii.

He was trying to fix up a kayak so it could track and record the songs of humpback whales.

Rizzi’s hobby is diving, and he had learned that you could hear and feel the haunting acoustic power of whale songs on your skin when underwater.

He wanted to capture the songs and put them on the internet for other people to discover. His initial idea was a buoy moored in front of his house equipped with a hydrophones and a recording device, but the songs would fade as the whales swam away. The buoys also kept getting washed away during storms.

So in 2003, Rizzi started a nonprofit foundation and brought in a group of engineers he had worked with in California. The big problem was propulsion, explained one of them, Graham Hine. A vessel that followed and recorded whales had to be silent, he said, so the force that moved it had to derive its power from natural forces, such as waves.

Months of experiments culminated in the engineers jumping up and down in Rizzi’s swimming pool to make waves. Their hope was that a parallel assembly of "wings" modeled after whale fins and hanging below a tiny boat might be able to turn the up-and-down motion of the waves into forward movement.

One day, the group made some waves, set the boat’s rudder for a circular path, then went inside for sandwiches.

"When they came back, it was still swimming around," said Hine. Their thought was: "We have something here that might work."

It was the birth of what has become known to ocean researchers as an "energy harvesting robot."

Hine, a software engineer, worked on it with his brother, Roger, a mechanical engineer and robotics expert who developed the design along with their father, Derek, an aeronautics engineer. They developed a number of prototypes, nagged by the thought that whale song listeners were a limited market, or, as Graham Hine put it: "You’re not going to make a lot of money doing that."

Rizzi formed a company called Liquid Robotics. The U.S. Navy offered a research contract that resulted in an unmanned boat the size of a large surfboard circumnavigating the Big Island of Hawaii in 2009.

In 2014, Boeing Co. formed a partnership that sent two prototype vessels to a war game sponsored by the British Royal Navy in 2016. There, one of the tiny vessels, packed with solar-powered sensors, detected, reported and tracked aircraft and a diesel submarine.

After that, Boeing bought Liquid Robotics.

The two companies have kept looking for other science-related markets besides the military. So far, according to Hine, now CEO of Liquid Robotics, they’ve found quite a few. Over 500 models of what the company now calls its "wave glider" have been sold and used around the world by governments, universities and other research groups.

Climate change poses the questions of how much carbon dioxide the Earth’s oceans can absorb from atmospheric emissions and what it will do to future fish stocks.

"That to me is why I can’t move this tool fast enough," said Hine. "We need to understand oceans better, but this is a tool that has got to be out there in numbers."

What was eerie about the experience of developing it, he recalled, was that during the first seven or eight years, "we had really no competitors. It was actually a bit scary. I thought maybe we’re crazy."

That was because Richard Jenkins, a British mechanical engineer who later became their chief competitor, was absorbed in something that seemed totally unrelated.

He had graduated from racing sailboats to racing land-based vehicles called "super maxis." They amount to small sailboats on wheels, and in 2009, Jenkins broke the world land-speed record for them. He hit 126.1 mph on a dry lake bed in Nevada.

Jenkins had found that a small tail mounted midway up the vessel’s "wing," or carbon fiber sail, kept the wing at the exact angle where it would produce maximum power while producing little drag.

He started to think about commercial uses, and his focus shifted to a variant of his discovery. He later dubbed it a "saildrone," a small, unmanned sailing vessel that could move faster than the wind.

"Then the question was, what could we do with it?" he recalls thinking.

As he began to explore the issues posed by climate change, he was drawn to the fishing industry. Oceans cover over 70% of the Earth’s surface, and they are vital to regulating carbon in the atmosphere by absorbing some of the Earth’s accumulating CO2 emissions.

While oceans provide food to millions of people and help create the Earth’s weather, Jenkins found that "they are also chronically undersampled because ocean exploration is difficult, dangerous, expensive and time-consuming."

Jenkins found backers for his company, called Saildrone Inc., based in Alameda, Calif. It captured global attention in 2013 by sending one saildrone from California to Hawaii. And, after more research, a foundation sponsored a more advanced saildrone, which circumnavigated Antarctica last year.

With the help of controllers, who can monitor and steer the saildrone by satellite, the vessel survived some of the world’s worst sailing conditions, including collisions with icebergs. In a company blog, Jenkins noted that the 196-day voyage "was unfathomable just a decade ago."

The companies have different business models. Liquid Robotics will sell its wave gliders for what Hine calls prices starting in the "low hundreds of thousands of dollars."

Saildrone operates on what it calls a "mission as a service" model, pricing temporary use based on a user’s needs. The unmanned vessels are much cheaper than running oceanic research ships, which can cost as much as $20,000 a day to operate.

NOAA uses both saildrones and wave gliders in its ocean experiments and has formed partnerships with academic researchers, such as Scripps Institution of Oceanography, to explore new uses for them.

Eric Terrill, director of Scripps’ coastal research and development center, said vessels that use only wind or wave power "give us perpetual ocean sampling systems that can stay at it for long durations."

One of the biggest unknowns in oceanography is the interaction among the ocean, the atmosphere and shallow clouds that can change both the climate and weather conditions.

"The atmosphere is like a crazy squirrel going nuts running on top of the slower-moving ocean — air-sea interactions are complicated," said Chris Fairall, a NOAA laboratory scientist who was involved in a recent ocean research project directed from Barbados in the Caribbean. It made use of both unmanned vehicles.

Adrienne Sutton, a research scientist at NOAA’s Pacific Marine Environmental Laboratory in Seattle, said the two autonomous vessels may shed light on whether the oceans will continue to absorb CO2 emissions in the future.

So far, the oceans have kept up with the steady increases in emissions. If the oceans’ abilities to do that in the future slow or stop, she added, "this becomes a really important question."

Researchers have been able to track CO2 storage in oceans in the Northern Hemisphere by putting sensors on commercial ships and buoys. The blind spot is in the Southern Ocean.

"There are a lot of mysteries out there for these harvest vehicles to solve," Sutton noted. "That’s why I’m in oceanography."

This spring, the coronavirus pandemic gave oceanographers a more sudden mystery to solve. The ships that normally measure the size of the nation’s largest commercial fishery, which is Alaska’s pollock catch — valued at over $1 billion a year — were locked down because of potential hazards to the crews.

Alaska’s Fisheries Science Center called upon Saildrone to fill the gap. It sent three vessels north from California equipped with acoustic sensors to count the pollock. Where and how many fish are there are crucial questions for Alaska because the pollock are moving as far as 600 miles north to seek cooler water.

The area Alaska needed to survey is twice the size of the Eastern Seaboard. Three saildrones started the 2,300-mile trip to Alaska starting in May. After 40 days at sea, they split up, each taking a third of the area needed for the survey.

They did their job, also reporting air and sea temperatures, wind speed and direction, relative humidity, barometric pressure, ocean salinity, and solar radiation. Then they sailed back to California.

Their data will be used by state officials to manage the fishing industry in the coming year, said Robert Foy, the science and research director of the Alaska Fisheries Science Center.

"It’s a massive turnaround of information, and Saildrone has been phenomenal in terms of what they’ve promised that they’ll be able to do," said Foy.