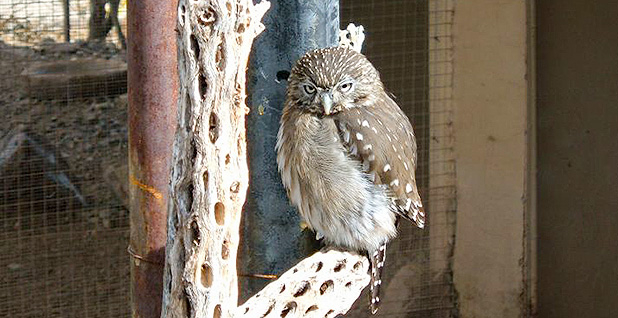 The cactus ferruginous pygmy-owl is at the center of a court fight over the meaning of an ambiguous phrase in the Endangered Species Act. Brian Dunnette/Flickr

The cactus ferruginous pygmy-owls that inhabit Arizona are sticking the Fish and Wildlife Service with a pretty big problem.

And it’s not just the owl that gives a hoot.

The federal agency is scrambling to save its interpretation of a crucial but notoriously ambiguous phrase in the Endangered Species Act. What an Arizona-based judge next decides in a lawsuit over the pygmy-owl could buffet officials and other species alike.

"The bottom line is, they are looking for a way to avoid listing species," said attorney Eric Glitzenstein, who represents environmental groups challenging the agency.

Consequently, how the phrase is interpreted can determine whether a species is deemed threatened or endangered or is denied Endangered Species Act protections altogether.

Recently, for instance, FWS relied on its disputed interpretation of the five-word phrase in concluding neither the Kenk’s amphipod nor the Deseret milk-vetch needed the ESA’s help (Greenwire, Sept. 29).

Everyone agrees the phrase lacks clarity, prompting one federal appellate court in 2001 to pronounce it "puzzling" and forcing FWS to spend years trying to figure it out.

But in a March 29 ruling that’s now being second-guessed, Arizona U.S. District Judge Rosemary Márquez struck down the agency’s "significant portion of its range" (SPR) policy adopted in 2014.

Though the specific case centers on the compact pygmy-owl, which tops out at about 6.75 inches in length, Márquez’s ruling extends nationwide.

"The Final SPR Policy is ‘arbitrary, capricious, an abuse of discretion, or otherwise not in accordance with law,’" Márquez wrote, adding that the policy’s intent "is arguably at odds with the conservation purposes of the ESA."

Márquez’s ruling stung the federal agency, not least because she reached out from her Tucson courthouse to touch species everywhere.

Officials quickly asked the Obama administration appointee to reconsider; at the very least, officials want her to narrow the decision’s reach.

"Federal agencies are not properly bound nationwide by the decisions of individual district courts on questions of statutory interpretation," the Justice Department subsequently argued in one court filing.

Underscoring the case’s importance, Justice Department attorneys added that "because the ‘significant portion of its range’ phrase is central to the definitions of ‘endangered species’ and ‘threatened species,’ [officials] need a way to apply that language."

The Center for Biological Diversity and Defenders of Wildlife, which sued on behalf of the pygmy-owl, want Márquez to hold firm.

"Courts in this and other [appellate] circuits routinely vacate regulations and other final agency actions of broad scope when they are deemed to be in violation of the law," the environmentalists stated in a court filing.

A decision is pending, even as attorneys disagree over the current status of Márquez’s original order.

Environmentalists first petitioned in 1992 for the administration to list the pygmy-owl under the ESA. The FWS did so in 1997, but then withdrew the listing in 2006 on grounds that the bird’s Arizona population was not a truly distinct population segment.

In 2011, the agency declined to relist the pygmy-owl, which FWS scientists describe as "cryptic" and "difficult to observe."

Environmentalists contend the agency should have more thoroughly considered the loss of bird habitat in the Sonoran Desert of Mexico. Geographically, this represents 20 percent or more of the bird’s range.

Federal officials, though, reasoned that even if the pygmy-owl disappeared from the desert, the bird with lemon-yellow eyes would likely survive in the remaining portion of its range.

As finalized in 2014, the policy of FWS and NOAA Fisheries states a significant portion of its range meant "the portion’s contribution to the viability of the species is so important that, without the members in that portion, the species would be in danger of extinction, or likely to become so in the foreseeable future, throughout all of its range."

Márquez ruled this interpretation was invalid and "superfluous," noting that it set a high threshold. Environmentalists want what Glitzenstein called a "more flexible" interpretation.

But following Márquez’s decision, FWS has effectively continued using the same interpretation. The agency stated Márquez’s ruling was "based on two misunderstandings" when officials announced the no-protection decisions for the Kenk’s amphipod and Deseret milk-vetch.

"They are continuing to apply an interpretation that a judge has deemed illegal," Glitzenstein said. "That’s usually problematic."

Glitzenstein added that "simply filing a motion for reconsideration does not automatically stay a court order" and said "the vacatur is now in effect."

An official with the service, speaking on the condition of anonymity, insisted the judge’s ruling has not yet taken effect "because we filed a motion for reconsideration."

The aide added that the service is not acting in defiance of the judge’s order but is taking every species decision on a case-by-case basis.

"We are aware that it could become vacated," the official said.