Livestock welfare: ‘It doesn’t sound humane, and it’s not’ 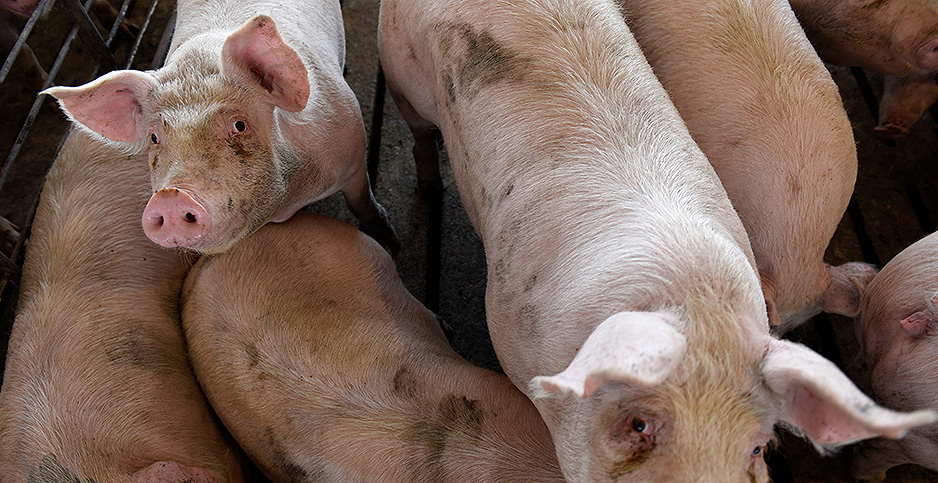 Hogs on a farm in Minnesota last month. Nicholas Pfosi/Reuters/Newscom

The COVID-19 pandemic is drawing new attention to what life is like for farm animals in their final days.

With a food supply system that can’t easily handle meatpacking plant closures, American agriculture has been faced with the unpleasant reality that hundreds of thousands of hogs and chickens can neither go to market nor be kept indefinitely on farms.

Animal welfare groups are seizing on the pandemic to point to loosely applied standards for how to humanely end the lives of farm animals that aren’t sick, as well as to the shortcomings of industrial-scale livestock agriculture that puts most of the meat supply chain in the hands of a few big companies.

The crisis also provides a platform for groups opposed to animal agriculture and meat consumption, such as People for the Ethical Treatment of Animals, which says on its website, "Animal agriculture is cruel, unsustainable, and bad for the environment, and people should make the shift to vegan eating."

The pandemic has hit the meatpacking industry especially hard because of the easy spread of the coronavirus among employees who work in close proximity. A handful of temporary plant closures cut off the supply chain for much of the hog industry in the Midwest and has sparked meat shortages and rationing in supermarkets.

Among the difficulties, she said, is widespread confusion over the terms "euthanization" and "depopulation."

Euthanizing is humanely ending the life of an animal that’s sick or injured, Jones said, if following the guidelines of the American Veterinary Medical Association. In that situation, she said, methods that minimize the animal’s pain may be paramount.

Depopulation is killing larger numbers of animals in emergency situations, and the AVMA’s standards are different. In those cases, the AVMA guidelines say, ensuring the welfare of animals is one of several considerations because the operation often has to be done quickly and on a larger scale.

"Therefore, the emergency destruction of animals through depopulation techniques may not guarantee that the deaths the animals face are painless and distress free," the AVMA said in the guidelines, updated last year.

Depopulation is a grim and traumatic task that shouldn’t be carried out on the farm but handled in processing facilities, House Agriculture Chairman Collin Peterson (D-Minn.) recently told reporters. He shared information about farm workers spending hours shooting hogs after meatpacking plants closed (Greenwire, May 4).

Pigs and chickens grow fast. With pigs in particular, plants are designed to handle animals of a certain size and won’t accept them at heavier weights. In some cases, Jones said, smaller facilities have more flexibility to do so, highlighting a weakness in an industry geared toward large-scale production.

Jones said her organization has received reports of chickens being depopulated by turning up the heat in the confined areas where they’re kept and turning off the ventilation — a method called "ventilation shutdown," which is allowed under AVMA depopulation guidelines.

"Obviously, it doesn’t sound humane, and it’s not," Jones said.

She said her group has tried without luck to persuade the AVMA to revise its standards. The killings underway shouldn’t be considered depopulation, she said, because the conditions for spreading the coronavirus in plants were avoidable.

The poultry industry follows humane methods outlined by the AVMA, said Tom Super, a spokesman for the National Chicken Council. At processing plants, slaughter is overseen by inspectors for the Department of Agriculture, he said. The agency itself relies on AVMA standards, not having animal welfare regulations of its own.

All sides agree the coronavirus pandemic is a special case. While natural disasters such as hurricanes sometimes leave regions dealing with large amounts of livestock to be depopulated or euthanized, never has the country had to deal with so many animals that can’t get to market.

"These are truly unprecedented and trying times, and depopulation is an unfortunate last resort," Super said. "Fortunately, in the broiler sector we have only seen sporadic depopulation, and it has not been widespread."

The food waste caused by supply chain disruptions may capture the public’s attention, Jones said, and spark a closer look at animal welfare issues in agriculture.

"We’ve always seen the possibility for this kind of thing, but this is unique," Jones said.