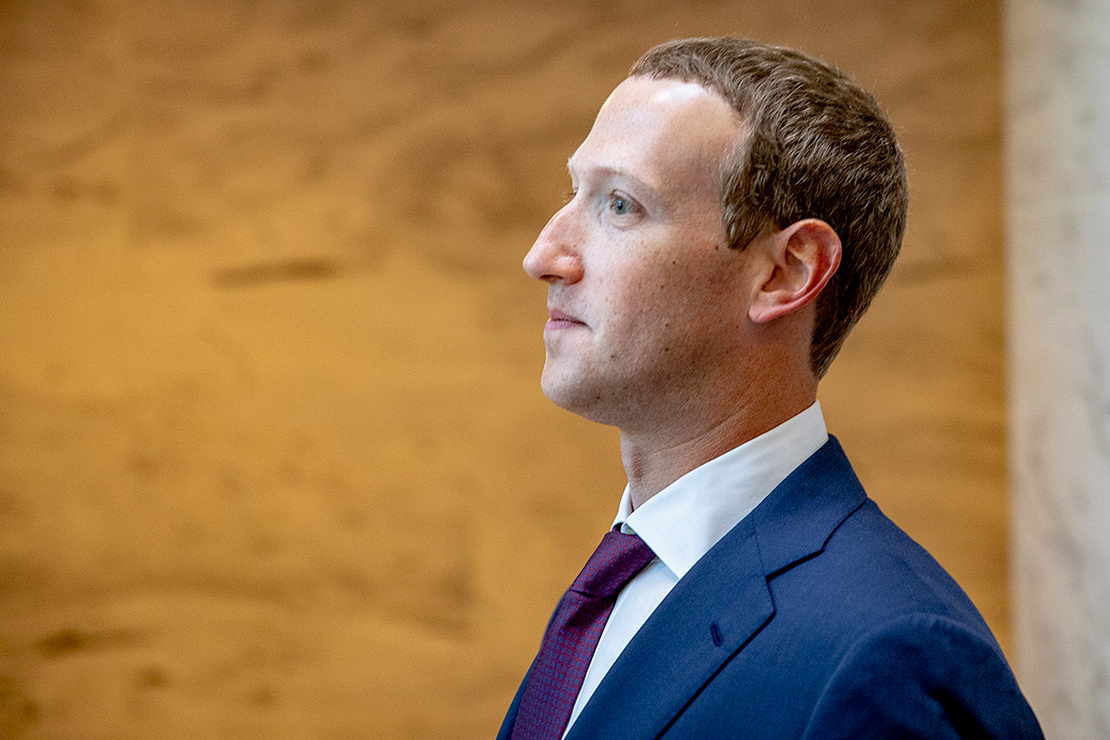 Facebook founder and CEO Mark Zuckerberg leaves a meeting with Sen. John Cornyn (R-Texas) in 2019. Facebook spent $14 million on lobbying over the past three months but did not work to pass major climate legislation before Congress. Samuel Corum/Getty Images

Mark Zuckerberg, the founder and CEO of Facebook Inc., has called climate change one of “our greatest challenges” and said “we have to act together” to stop it.

But with the most significant climate legislation in a decade on life support in Congress, Zuckerberg and his social media company — one of the biggest lobbying spenders in Washington — have been largely silent.

Between July and the end of September, when Democratic lawmakers were racing to pass the “Build Back Better Act” via budget reconciliation, Facebook’s lobbying on the stalled climate and social spending package focused on provisions about technology and disinformation, according to disclosure documents released last week.

Meanwhile, Facebook is a leading member of the U.S. Chamber of Commerce, an influential trade association that’s vowed to kill the multitrillion-dollar reconciliation package.

“The company has been reluctant to engage in controversial issues when they don’t have to, even when, like this, they have a clear responsibility,” said Bill Weihl, Facebook’s former sustainability director.

Weihl, who left the company in 2018 and now leads the environmental group ClimateVoice, noted that climate misinformation is prevalent on Facebook platforms (Climatewire, Sept. 16). He also pointed out that the company is financially supporting the Chamber’s six-figure ad campaigns against the reconciliation bill.

“Their business is playing a big role in amplifying the problem here, and they are doing very little to help counter that,” Weihl said of Facebook, which began aggressively ramping up its purchases of renewable energy during his six years at the company.

Facebook spent nearly $5.1 million on federal lobbying between July and the end of September, according to a quarterly filing the company made last week.

The social media giant’s total investment in U.S. advocacy this year is over $14.6 million. That’s more than any single company aside from Amazon.com Inc., according to data compiled by the transparency group OpenSecrets.

Yet Facebook, which reached net-zero emissions for its operations last year and plans to do the same for its value chain by 2030, had little to say to policymakers about the reconciliation bill.

President Biden is relying on the legislation, which includes billions of dollars in tax incentives to speed the deployment of clean energy and electric vehicles, to help fulfill his pledge to cut U.S. emissions 50 percent from 2005 levels by the end of the decade.

Regarding the “Build Back Better Act,” Facebook disclosed lobbying on issues “related to technology and the Internet” and the legislation’s “disinformation” provisions.

The company also said it lobbied on “issues related to climate change” but didn’t disclose advocating on any specific climate legislation.

The lobbying occurred at a time when Facebook, which owns Instagram and WhatsApp, was under growing scrutiny for allowing false assertions about the presidential election and climate change to permeate its platforms.

In early September, The Wall Street Journal began publishing a series of critical stories based on leaked internal documents. They showed that Zuckerberg and other top executives knew the company’s platforms were promoting misinformation and polarization.

Those revelations resurfaced this weekend when leaked documents from a Facebook whistleblower alleged that platform executives were aware that President Trump’s followers used the platform to help organize the Capitol insurrection on Jan. 6.

Facebook, which received more than a quarter of online ad revenue in the U.S. last year, has also long faced antitrust questions in Washington.

Facebook’s disclosures come as other tech giants committed some advocacy efforts to supporting the reconciliation bill.

Amazon, for instance, lobbied on “issues related to taxes, including renewable energy tax credits” in the “Build Back Better Act,” its most recent filing shows.

Google Inc. advocated for the Clean Electricity Performance Program, a component of the reconciliation package opposed by West Virginia Sen. Joe Manchin, one of the Democratic caucus’s key swing voters. No Senate Republicans have been willing to support the reconciliation bill.

E&E News published a story earlier this month about Facebook’s public silence on the “Build Back Better Act.” The company then published a blog post supporting the legislation’s climate investments (Climatewire, Oct. 4).

“Facebook urges Congress to ensure that strong climate and clean energy provisions are passed — including those provisions currently included in the budget reconciliation bill and the bipartisan infrastructure bill,” wrote Nick Clegg, the company’s head of global affairs.

“We need to see federal policy enacted to make good on the Paris Agreement,” he added. “Future generations are counting on it.”

At the same time, the Chamber, which has a Facebook official on its board of directors, has been attacking the reconciliation bill.

Suzanne Clark, the trade association’s CEO, called it “an existential threat to America’s fragile economic recovery and future prosperity” in a letter to lawmakers last month. She warned it would “hamstring America as we work to compete globally, especially with China.”

The Chamber spent over $16.3 million on lobbying during the last quarter, more than any other group.

“It really appears that Facebook is green washing its image, talking a lot about sustainability, but not actually doing anything about it,” said Robert Brulle, a Brown University professor who’s studied climate lobbying.

Facebook didn’t respond to questions about its lobbying activities and involvement with the Chamber. In a statement sent after this story was published, however, the company noted that it opposed the Trump administration’s move to withdraw from the Paris climate deal and is one of the largest corporate buyers of renewable energy.

“We are committed to fighting climate change and are taking substantive steps to address this important issue,” spokesperson Eric Porterfield said.

Weihl, the former Facebook official, applauded the company for voicing support for the climate components of the reconciliation bill, yet argued the company needs to do more.

“The Chamber and the other big anti-climate trade groups are spending millions of dollars on ads and lobbying to undermine this bill. A blog post by Facebook does not counter that in any useful way,” he said. “It’s a good start, but it needs to be backed up with really muscular advocacy.”