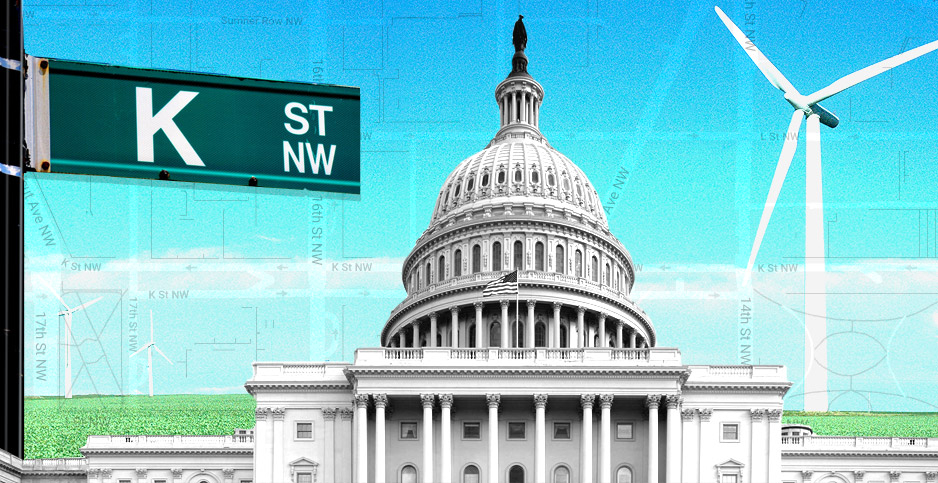 The wave of expenditures in 2018, which had been building in previous years, coincided with growing competition over the rights to generate and sell offshore power, including from deep-pocketed European utilities and subsidiaries of fossil fuel companies.

It reacted to the establishment of new state policies encouraging investment in offshore wind projects, especially on the East Coast.

"We had legislation that was enacted [in New Jersey], setting goals for alternative energy production. What followed was a real increase in those firms lobbying to install wind turbines," said Jeff Brindle, executive director of New Jersey’s Electoral Law Enforcement Commission (ELEC), which publishes annual reports on lobbying in the state.

That outcome appears to be luring a fresh crop of companies into the lobbying game for the first time. During the first quarter of 2019, new entrants included turbine manufacturers, shipping interests and representatives of fisheries groups.

But state policies have created a market for the power.

In New Jersey, for instance, the governor ordered utility regulators to buy 1,100 megawatts of offshore wind. Legislators voted to require half of the state’s power to be sourced from renewables by 2030. Regulators adopted a credit system to subsidize offshore wind.

The same year, developers paid lobbyists nearly $875,000 — well over three times the amount in 2017 — according to a tally from ELEC.

Fossil fuel and nuclear interests in the state were much more lavish spenders: the New Jersey Petroleum Council channeled more than $595,000 toward lobbyists, while the Public Service Enterprise Group, which was seeking subsidies for its nuclear plants, spent over $1.4 million.

Ørsted AS, by far the biggest offshore spender, paid lobbyists about $300,000.

On the East Coast, politicians from both parties tend to favor action to support offshore wind, said Nancy Sopko, co-director of the Special Initiative on Offshore Wind at the University of Delaware.

"These companies are creating long-lasting relationships that can span administrations," she said.

Still, some state-level lobbying has taken place within the context of ongoing battles between offshore developers and incumbent industries.

In Ohio, the nation’s largest coal miner, Murray Energy Corp., has funded an economic-viability analysis and picked up legal tabs for opponents who testified against a six-turbine pilot project in the Great Lakes, according to press reports.

The Lake Erie Energy Development Corp. (LEEDCo), the developer of the pilot, got tentative approval in July from the Ohio Power Siting Board (OPSB) anyway. Disclosures show it lobbied OPSB along with the governor, natural resources authorities and the attorney general.

It’s unclear how much either side spent.

"Being opposed by big coal and its deep pockets has added to the challenges of winning approval for this important effort to generate clean energy in Lake Erie. We have engaged in necessary and informative advocacy efforts in response," said David Karpinski, vice president of operations for LEEDCo. Murray Energy declined comment.

In Maryland, opposition originated from tourism-minded officials in the resort town of Ocean City who have fought to get two wind projects pushed out of sight of shore.

From November 2017 through October 2018, the town paid $67,000 to one of the state’s best-known and best-compensated lobbyists, Bruce Bereano, for discussions with state and federal officials.

"The specific goal for the City Council in hiring Mr. Bereano is to assure wind turbines are not visible," said Jessica Waters, communications manager for the Town of Ocean City.

Under the town’s contract, added Waters, Bereano has also worked to stop the expansion of renewable energy credits for offshore wind, a tenet of a landmark clean-energy law passed by the Maryland General Assembly in early April.

"Those credits could be used to facilitate construction of additional turbines visible from the Ocean City coastline," said Waters.

But the prospective builders of both projects in Maryland have undertaken their own spending campaigns, at times dwarfing Ocean City’s expenditures.

Deepwater Wind, developer of the Skipjack Wind Farm, spent over $202,000 during the same 2017-18 period, according to state disclosures. Ørsted, which acquired Deepwater Wind in the closing days of that period, chipped in an additional $50,000.

Combined, they spent about the same amount in Maryland as a major pharmaceutical industry trade group ($252,906) and the state’s Catholic archdioceses ($244,572).

A ‘path to market’

The influx of lobbying expenditures is also notable because offshore wind companies aren’t yet able to produce electricity cheaply enough to compete with other sources.

That means developers remain entirely dependent on a handful of East Coast states, where laws and executive orders have guaranteed a long-term buyer of the power.

"Without that path to market, these projects aren’t likely to be built," said Sopko.

In 2017 and 2018, officials in several Northeastern states opened requests for project proposals. It brought on new attention from lobbyists, who turned up at state and municipal legislatures, energy and environmental agencies. and governors’ offices.

Developers like Vineyard Wind LLC, Ørsted and Deepwater Wind cited official solicitation periods as an issue in state lobbying disclosures, though it’s not entirely clear what specific policies they targeted.

Sopko, who registered in previous years as a lobbyist for the wind industry and an ocean conservation group, said companies may have sought to shape the solicitation in ways that would favor the offshore wind industry at large.

Judging from public comments filed by developers, she said, conversations might have dealt with the amount of power that would be procured by the state, as well as the number and timing of solicitation rounds.

"[E]ven though this lobbying is done by individual companies, it’s not always about gaining a competitive edge," said Sopko.

One company, the transmission developer Anbaric Development Partners LLC, has said it is pushing for future solicitation rounds to deal with the question of who gets to connect offshore wind farms to the grid. It spent $330,000 last year in Massachusetts alone, compared with $90,000 the previous year.

The federal auctions for leases off the coast of Massachusetts may also have helped trigger new lobbying within the state.

But last year, Equinor — which backs fossil fuel development — paid $180,000 to lobby the state’s legislators and energy authorities "regarding matters related to offshore wind" — its first such expenditure in the state.

In late December, it won one of the federal lease blocks put up by BOEM.

"We are witnessing the first of a brand-new American energy industry," said Sopko. "The industry recognizes the importance of having a seat at the table."