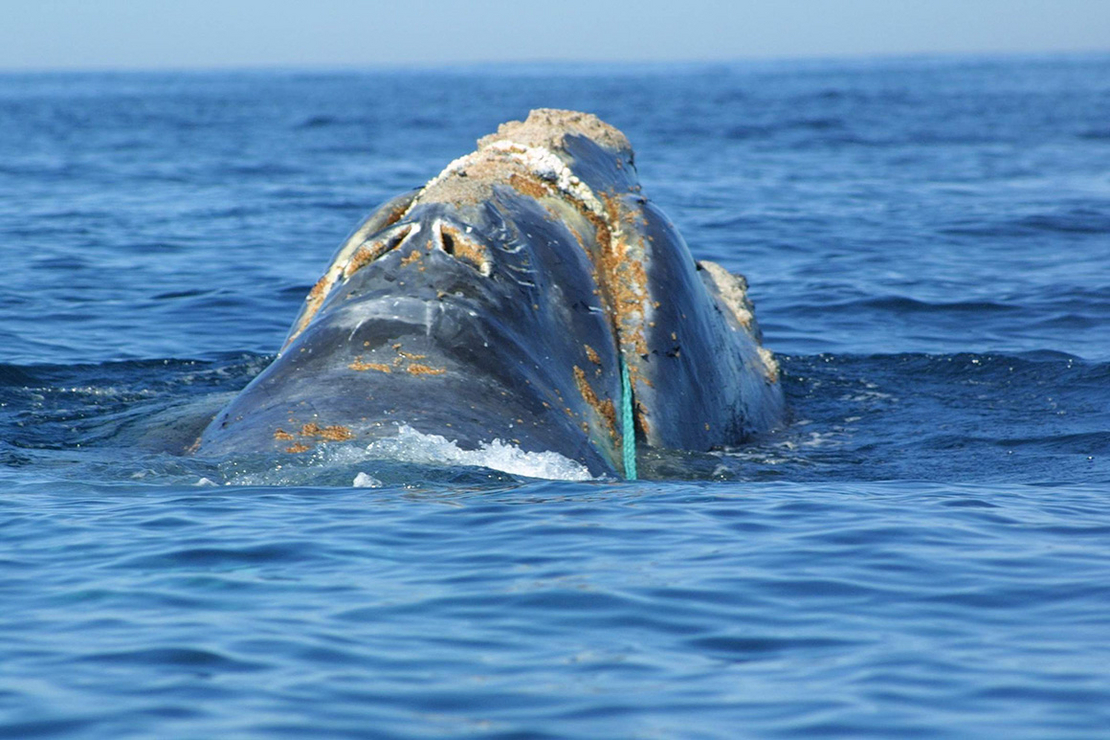 Lobster fishermen have asked the Supreme Court to lift fishing restrictions off the coast of Maine that were designed to protect the endangered North Atlantic right whale. A whale with fishing line embedded in its jaw is shown. Getty Images / Staff

In an emergency application docketed Tuesday, the Maine Lobstering Union called on the Supreme Court to reverse a decision by a federal appeals court that preserved a NOAA Fisheries prohibition on the use of vertical buoy ropes in nearly 1,000 square miles of federal waters each winter.

The federal restrictions were designed as a safeguard for North Atlantic right whales, which can become entangled in the ropes. Scientists estimate that only about 400 of the whales remain.

Attorneys for the lobster fishermen said the prohibition unfairly burdens the industry.

“Maine fishermen have taken great pains to implement mitigation measures at enormous expense to conserve and protect right whales that are not present in the waters where they fish, only to see their efforts ignored by federal agencies that impose additional regulations without analyzing the effectiveness of existing ones,” the application stated.

The lobster union’s request stemmed from a legal battle that began in the U.S. District Court for the District of Maine. Earlier this year, the court granted the lobster fishermen’s request to stop NOAA Fisheries from enforcing its ban on vertical buoy ropes between October and January.

NOAA Fisheries then brought the case to the 1st U.S. Circuit Court of Appeals, which earlier this month granted government lawyers’ request to lift the lower court’s injunction.

“Time is of the essence if the risk posed by this season’s fishing is to be reduced at all,” government attorneys wrote in their Nov. 5 plea to the 1st Circuit.

Environmental groups have also fought to preserve the fishing restrictions and have called on the government to go further to issue even stronger protections.

"The Supreme Court was right to reject this unfounded attempt to halt reasonable efforts to protect one of the planet’s most endangered animals," wrote Kristen Monsell, oceans legal director and senior attorney for the Center for Biological Diversity, in an email. "Right whales are on the brink of extinction, and they shouldn’t be at risk of being entangled and killed by lobster gear. It’s time for lobster fishers to embrace ropeless gear that doesn’t pose this deadly threat to marine mammals."

Lobster fishermen had brought the request to Breyer, who oversees emergency applications stemming from matters before the 1st Circuit.

The application is District 4 Lodge of the International Association of Machinists and Aerospace Workers Local Lodge 207 v. Raimondo.