Lolita Zinke makes her mark outside the Cabinet 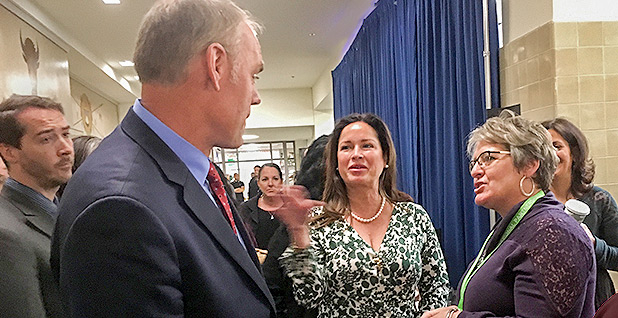 Meet Lolita Zinke, the woman dubbed a "real trooper" by her husband.

While Ryan Zinke runs the Interior Department, Lolita Zinke serves as the opinionated campaign chairwoman for one of several Republicans running for a high-profile U.S. Senate seat in Montana.

She sometimes hits the press, hard.

On Wednesday, deploying a #FakenewsCNN hashtag, the California native said on Twitter she would "completely agree" with President Trump’s tweeted assessment that most Americans "think the Media is inventing stories about Trump & his Administration."

The wife of a former Navy SEAL and the mother of three, including a Navy veteran, Lolita Zinke wades into other controversies as well. In a Sept. 24 tweet, she denounced as "#disgraceful and #clueless" the football players who knelt during the national anthem.

And, at times, she’s right by the Interior secretary’s side, although officials characterize this support as familial and nothing out of the ordinary.

An Interior official added that "much like previous secretaries and spouses, she occasionally meets her husband while he is traveling at her own personal expense" and that "she and all Cabinet spouses received a federal ethics briefing."

Still, Lolita Zinke’s diverse activities spotlight the sometimes blurry boundaries between public and private spheres that confront family members in every administration. These are perennial issues, now amplified by the social media megaphones that can turn quiet musings into broadcast opinions and by the heightened scrutiny of Cabinet-level ethics (Greenwire, Oct. 12).

So far, the lawsuit stated, the department "has failed" to produce any documents or make any determination concerning the FOIA request first filed in June (E&E News PM, Oct. 5).

The Justice Department, representing Interior, has not yet responded to the lawsuit.

Some spousal activity comes with the territory.

The husband of former Interior Secretary Sally Jewell would attend various D.C. events alongside his wife, such as the annual lighting of the White House Christmas tree. Once, he went hiking with her in Maine. The wife of Ken Salazar, Jewell’s predecessor, also took part in some events.

"Both spouses were known to Interior staff, but I think it was rare for them to accompany [the secretaries] on official travel," said one former Interior official, speaking on condition of anonymity.

In April, for instance, Lolita Zinke was alongside her husband in Atlanta at an NRA event. She was also with him on a tour the secretary and a group of senators took to Norway, Greenland and Alaska.

Outside Interior, Lolita Zinke explicitly entered the political arena in early September, when she was named chairwoman of Republican businessman Troy Downing’s Senate campaign. Downing is running for the chance to take on Democratic Sen. Jon Tester, a red-state politician who some thought might someday be challenged by Zinke himself.

Tester voted for Zinke’s confirmation, while 31 Senate Democrats opposed him.

"This isn’t title only," Lolita Zinke said in a statement last month. "I’m going to be hands-on in this campaign because it’s vital for Montana and America that we elect Troy."

Downing’s campaign filings, covering the period through Sept. 30, do not show any payments to Lolita Zinke. One public way in which she’s contributed, though, is through her Twitter account, on which she has tweeted or retweeted more than two dozen pro-Downing messages.

She stands out, in some respects. The wife of EPA Administrator Scott Pruitt does not appear to have a Twitter account, while the wife of Energy Secretary Rick Perry last tweeted in 2015.

She’s tweeted strictly fun pictures, like one from an August vacation with her husband that she titled "Love on the Bosporus." She’s also tweeted photos that shed some light on how she’s by her husband’s side at other times, like an April 13 photo of the two in a meeting in Sacramento with California Gov. Jerry Brown (D).

The picture, though, was not the classic political grip-and-grin photo. Instead of Brown, the photo showed the Zinkes and the governor’s dog.

‘This knucklehead shows up’

She was born Lolita Hand in Santa Barbara, Calif., and graduated from the University of California, Santa Barbara, before attending California Western School of Law. She met Ryan Zinke in 1990 at McP’s Irish Pub and Grill, a bar near Coronado, on a night, he recalled decades later, when she was wearing a colorful skirt and black cowboy boots.

At the time, she was a single mom, raising her daughter Jennifer following the death in a car accident of her first husband. Zinke was serving as an instructor at the Navy’s famously grueling Basic Underwater Demolition/SEAL, or BUD/S, training and going through a divorce from his first wife.

They married in August 1992, when Ryan Zinke was still in the upward trajectory of a high-speed Navy career that often sent him far away.

"I spent years missing birthdays, family dinners, tucking my kids in at night, and anniversaries. Lolita was left raising a family alone with the uncertainty of my return," Ryan Zinke wrote in his 2016 memoir, titled "American Commander."

Consider, Zinke recounted, what happens when someone returns home from a special warfare deployment. Instead of secret missions and the silent brotherhood, he finds kids running around, teenagers awkwardly growing up and chores that don’t include kicking down doors.

"All of a sudden this knucklehead shows up saying that he’s the man of the house, and the wives who have been dealing with the usual family drama say, ‘Wait a second! The crown is not yet yours!’" Zinke wrote.

While the couple was living in London, Lolita Zinke worked as a civilian quality control specialist, where she was invited to various functions involving the Navy brass.

"That gave me an edge on the flag deck!" Ryan Zinke later recounted.

According to a Republican National Committee summary, "Lolita later continued her public service" as an undercover "operative with the California Department of Motor Vehicles in San Diego." No further details are provided.

She was a member of Trump’s Hispanic and women’s outreach efforts during the 2016 presidential campaign, writing a pro-Trump article for the arch-conservative Breitbart News Network. In August, she tweeted a photo of herself with Steve Bannon, the former White House strategist who runs Breitbart, writing "[heart] this man!"

"I’m a republican because I believe in fiscal responsibility, economic growth through cutting regulation, and a strong military," she stated on a Republican National Committee webpage, adding that "my Hispanic values of family first, strong work ethic and a personal, spiritual relationship with God are embodied by the republican values."

She subsequently was a member of the Trump transition team for the Department of Veterans Affairs after the election, and she accompanied her husband to a job interview in Trump Tower that left him uncertain about what position he might be offered.

"I walked out in the hallway and I said, ‘Well, Lola, what do you think?’" Zinke subsequently recounted to the Public Lands Council. "She says, ‘That meeting went great, but I think he was looking at you for Interior.’"