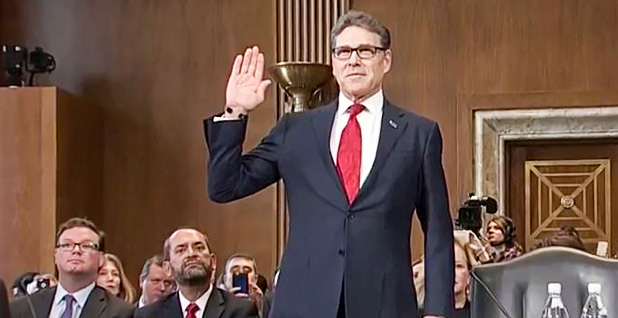 The former Perry adviser is the only lobbyist listed in the disclosures. Miller Strategies LLC’s client roster includes a number of companies whose futures are closely intertwined with the Department of Energy.

FirstEnergy Corp., an Ohio-based utility with a floundering power plant division, has loudly advocated for DOE’s proposal to rewrite the rules governing wholesale electricity markets to favor coal and nuclear units. It retained Miller in August and paid his firm $110,000 in the third quarter to work on "issues associated with organized electricity markets."

The engineering and design firm AECOM, which has a long history of seeking DOE contracts, has paid him $160,000 in 2017.

And Atlanta-based Southern Co., which is relying on $3.67 billion in DOE-backed loans to build a nuclear power plant in Georgia, paid Miller $140,000 through the first three quarters of the year.

"He is very savvy, very well-connected," said Mike McKenna, a Republican energy lobbyist who served on Trump’s DOE transition team. "Someone with his connections and ability can command top dollar, so it is not surprising that he is making top dollar."

The exact extent of Miller’s influence at DOE is unclear. Neither he nor the department responded to requests for comment. But former Perry advisers and industry observers said Miller is extremely close to the former Texas governor.

A native Californian who served as an adviser to former Gov. Arnold Schwarzenegger (R), Miller is widely credited with rehabilitating Perry’s image after a poor showing on the presidential campaign trail in 2012. A scattered debate performance, in which Perry failed to list the names of all three federal agencies he proposed eliminating, was the lasting image of that campaign.

Ray Sullivan, a Texas-based political operative and Perry’s top former aide, called Miller politically savvy and said he was particularly helpful on the West Coast during Perry’s first presidential run. Miller then helped his former boss re-establish himself during the most recent presidential election.

He "really stepped up after the 2012 campaign and led the 2016 presidential campaign," Sullivan said. "But unfortunately, Perry didn’t get the traction he desired in 2016. But as someone who’s been around him for a long time, he was much better prepared in 2016 than he was in 2012 and Jeff was a big part of him being better prepared and better positioned in 2016."

"He obviously learned a lot from our shared experience in 2011/2012," Sullivan added.

Miller was on the scene again when Perry was nominated to lead DOE, one of the three agencies he had previously proposed eliminating. During Perry’s Jan. 19 confirmation hearing, Miller sat in the front row behind the future Cabinet secretary. The pair wore red ties and, according to a watchful Austin American-Statesman columnist, exchanged a high-five before the hearing began.

News reports subsequently named Miller as a contender to serve as chief of staff at DOE. But instead of following Perry into government, Miller began pitching his services around Washington. He quickly assembled a list of clients with DOE-related business.

Southern Co. was already a Miller client by then, having hired the former Perry aide in March. A spokesman for the utility confirmed that Miller lobbied on energy issues for the company but declined to provide further details. DOE provided Southern $3.67 billion in conditional loan guarantees for its Plant Vogtle nuclear reactor project in September (Greenwire, Sept. 29).

FirstEnergy, by contrast, spent the summer unsuccessfully lobbying the Trump administration to use the emergency provisions under the Federal Power Act to keep several ailing coal facilities open. Those efforts came as the Akron, Ohio-based utility struggled to prevent a subsidiary charged with running the company’s merchant power plants from filing for bankruptcy protection.

The company’s aging fleet of coal and nuclear units has been devastated by low wholesale power prices and stiff competition from natural gas in the PJM Interconnection, a wholesale electricity market encompassing much of the Mid-Atlantic.

The Trump administration rejected FirstEnergy’s pleas at the end of August. A few days later, the company hired Miller to lobby the department. A month later, at the end of September, DOE released its proposal to subsidize coal and nuclear power plants. FirstEnergy has emerged as one of its loudest supporters (Energywire, Nov. 9).

A FirstEnergy spokeswoman said the company does not disclose the relationships it has with outside consultants.

"People pay for access," Billet said. "This is one of those components in the lobbying system right now. If you’ve got that long-term relationship, the trust of a public official and all that access, it can pay off, especially if you have credibility with them when it comes to issues."

It’s unclear if Miller has communicated with his former boss on client-related business. DOE visitor logs show Miller visited twice on June 29, the day Trump delivered a speech outlining his energy priorities at the department.

Miller first entered DOE at 12:31 p.m. EDT. The next visitor through the turnstiles, a few seconds later, was Bob Murray, the coal company CEO and vocal champion of the Trump administration’s coal policies. The pair later entered the department a second time that day, this time roughly two minutes apart. The log entries do not say whom the pair met with at the department.

Murray joined FirstEnergy’s effort over the summer to pressure the administration to use the Federal Power Act. And while he has backed the plan to support coal plants, Murray has said he played no role in lobbying for the proposal (Greenwire, Dec. 8).

A Murray spokesman said the coal company CEO was merely there to watch the president’s speech.

"Mr. Murray had no other scheduled meetings and departed after the event concluded," Gary Broadbent wrote in an email to E&E News.

As for Miller, visitor logs put him back at DOE in late October. The logs do not specify whom he met with.