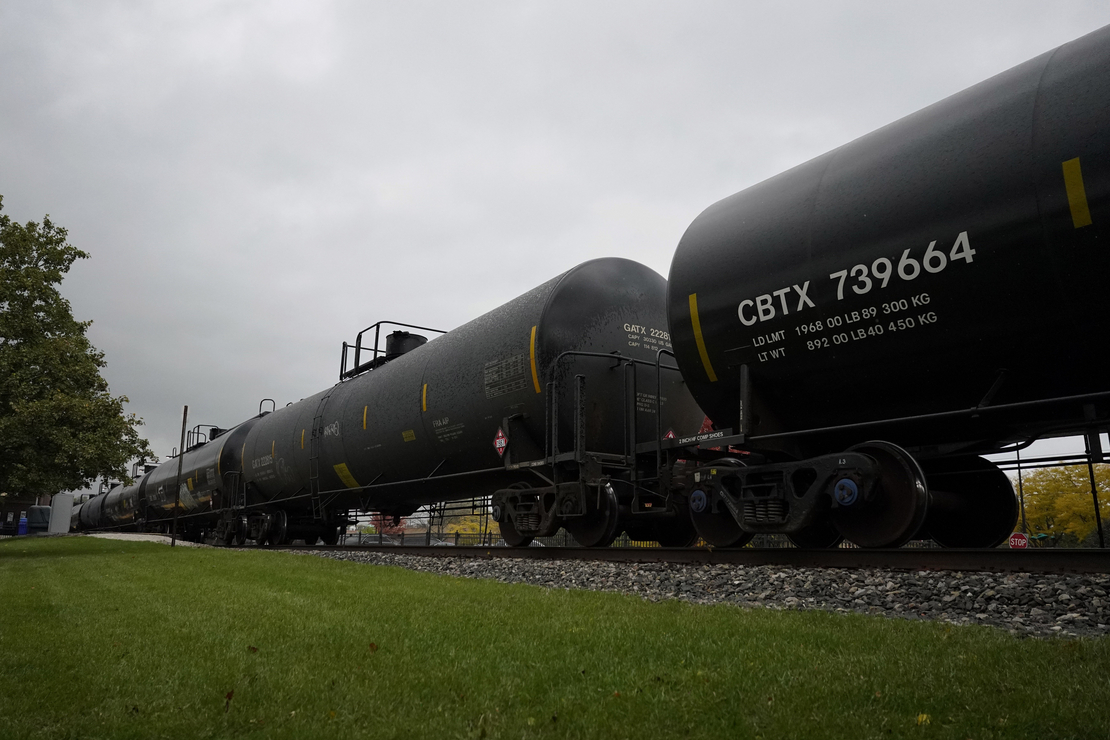 A freight train is seen at a train station in Northbrook, Ill., on Oct. 12. Nam Y. Huh/AP Photo

A threatened strike by rail workers has the biofuel industry bracing for another knockdown while memories of the Covid-19 pandemic’s disruptions are still fresh.

Most crop-based fuels like corn ethanol are shipped by freight rail, and much of the grain or soybeans used to make them move on trains as well, according to the industry. The potential hit to biofuels is one of the more significant impacts for American agriculture.

“Our country’s ethanol producers rely greatly on the railroads to move their products to market, and if the nation’s trains stop running, the nation’s ethanol biorefineries stop running too,” Geoff Cooper, CEO of the Renewable Fuels Association, a trade group, said in a statement Tuesday praising President Joe Biden for prodding Congress to avert a walkout.

Biden on Monday called on Congress to intervene, ratifying a labor agreement crafted this fall that was rejected by some of the unions representing railroad workers. House Speaker Nancy Pelosi (D-Calif.) responded that the House would vote on the issue this week (E&E Daily,Nov. 29).

The industry relies on rail for 70 percent of ethanol shipments, with 20 percent moving by truck and 10 percent by barge, according to the RFA. A strike would be a “disaster,” Cooper said, adding that biofuels support 400,000 jobs nationally.

The association has urged rail companies and labor unions to quickly ratify a long-term agreement, and it joined other agricultural and business groups Monday on a letter to key lawmakers asking Congress to intervene to prevent a work stoppage — a move Congress has made in past disputes.

“The American agricultural community could see disruptions in transporting 6,300 carloads of food and farm products that are carried by rail daily,” the groups said in the letter to the top Democrats and Republicans in the House and Senate.

Ethanol moves mainly by rail because its alcohol content precludes pumping it through oil pipelines, according to the Association of American Railroads. And the fuel depends on a wide network of trains; as much as one-fifth of ethanol shipments originate on short-line or regional railroads, the AAR said, owing to biofuel plants’ locations in rural areas.

U.S. railroads have moved about 395,000 carloads of ethanol per year over the past five years, according to the Renewable Fuels Association.

For biofuel companies, a rail strike would be the second blow in the past two years, after the pandemic’s slowdown in traveling took a toll on fuel demand and halted operations at many facilities. Congress later provided aid through pandemic assistance legislation.

The biofuel industry — and in particular ethanol — already faces a bumpy ride due to its reliance on government programs like the renewable fuel standard that are subject to the priorities of one administration or another. This week is likely to bring more news, either welcome by companies or not, when EPA announces proposed minimum biofuel volumes to be blended into gasoline in 2023.

A looming walkout by rail workers has added to the uncertainty. Rail companies and four labor unions that didn’t sign on to a proposed deal from the Biden administration have averted a strike through temporary agreements that put off any stoppage until Dec. 9. Negotiations over the past two years have addressed issues such as wages, while outstanding points include paid sick time.

Other agricultural commodities, such as soybeans and fertilizer, are vulnerable as well. A train transporting soybeans — which are used in fuels like biodiesel in addition to livestock feed and other purposes — is a “sophisticated transaction” involving distance, volume and expense, said Mike Steenhoek, executive director of the Soy Transportation Coalition, an industry group based in Ankeny, Iowa. Those transactions are less likely in an uncertain rail environment, he said.

“Obviously, an actual rail shutdown is the least desirable option, but even a scenario in which negotiation deadlines and potential strike dates continue to be temporarily extended into the future would increase uncertainty and impose hardship,” Steenhoek said in an email. “Agriculture will struggle to succeed in such an environment.”

Agriculture groups said a strike doesn’t have to occur to bring disruptions. Preparations before a work stoppage would require ramping down production, which would disrupt supplies of many goods. Fertilizer, for instance, might not be fully available for application in the fall, possibly leading to lower crop production, said the Fertilizer Institute, an industry group.

Like other potentially hazardous chemicals, fertilizer is considered a sensitive cargo that would be taken offline as much as five days ahead of an anticipated strike, the organization said. That keeps it from sitting idle on tracks during a work stoppage.

A rail strike would make that problem all the worse, the group said, forcing manufacturing facilities to stop operating if they don’t have adequate storage, in a global market that’s already tight.

“Rail is absolutely critical to getting farmers the fertilizer they need throughout the country,” said Chris Glen, director of advocacy and public relations for the Fertilizer Institute.

Other modes of transportation don’t offer much relief, Glen said, adding that historically low water on the Mississippi River has disrupted barge shipments for the industry. “There is zero elasticity in transportation at the moment. We continue struggling with enough trucks, drivers and, most recently, barges.”

In St. Louis, an economic development group called the St. Louis Regional Freightway touts that area’s variety of transportation modes but worries that the temporary loss of any of them could shut down commerce at a peak season for the movement of farm commodities. “They’re all dependent on each other,” said Mary Lamie, the organization’s executive vice president for multimodal enterprises.

Although barges and trucks are key parts of the network, they can’t make up for the loss of rail connections, Lamie said.

While Lamie said she hopes a strike is quickly averted, she added that the attention to the potential crisis may have one bright side — highlighting the value of transportation infrastructure from roads to rails to waterways. The St. Louis region has advantages being in the middle of the country near rivers, but continuing public investment is a top priority to maintain a flexible transportation system, she said. “For us, it’s just sustainable funding.”