Loophole could send disaster aid to other projects 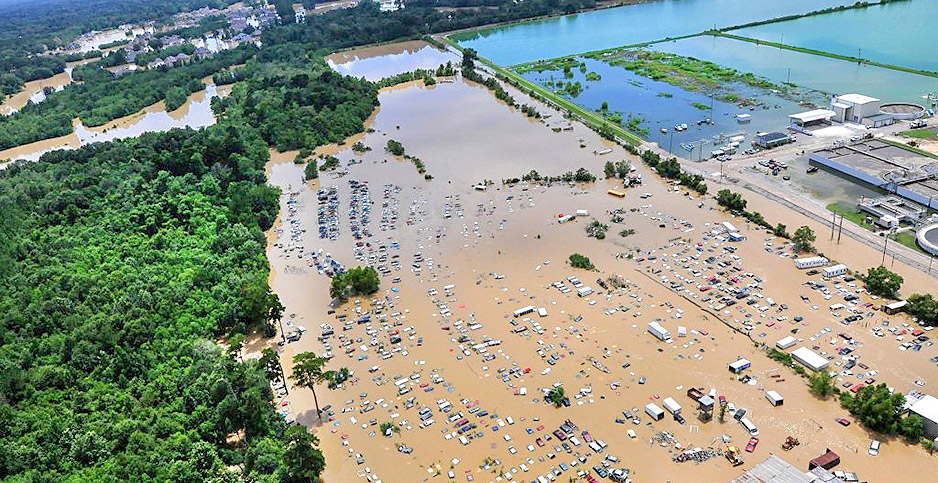 Parts of Baton Rouge, La., experienced severe flooding in 2016. An Army Corps of Engineers project would carry floodwater away from the city. Department of Agriculture/Wikipedia

The ink had barely dried on the Disaster Recovery Reform Act when policy watchdogs found a political loophole buried inside the 539-page bill.

Finalized in the wake of Hurricane Florence, the list of reforms was hailed as a milestone toward putting the Federal Emergency Management Agency in closer step with communities that stand to suffer from damaging storms.

Seemingly brushed over by Congress is a "general waiver" that for the first time commingles funds between FEMA hazard mitigation grants and public works projects by the Army Corps of Engineers.

Critics say the provision could have serious consequences for the Stafford Act, the 1988 bedrock law that governs the way FEMA disaster dollars flow to people and places that need it most. One group said it threatens to turn the disaster program into a "slush fund" for earmarked projects.

Chad Berginnis, executive director of the Association of State Floodplain Managers, said the measure was "potentially a huge problem" with "profound implications on how [disaster] recovery might go in the future."

Rob Moore, a senior policy analyst at the Natural Resources Defense Council, called the measure "a very ill-advised change which we may come to regret."

The "poison pill," as some have called it, is a general waiver that allows governors overseeing major disasters to petition for a presidential remission from long-standing Stafford Act rules that prohibit individuals and property owners from receiving disaster aid from more than one federal program at a time.

The government calls that a "duplication of benefits."

A homeowner, for example, can’t apply for a flood hazard mitigation grant through FEMA while also participating in a taxpayer-funded home buyout program. By the same token, a property destroyed by wildfire cannot be reconstructed using hazard mitigation grants if the owner is also filing a private insurance claim.

Lawmakers have long chaffed at the Stafford Act’s duplication-of-benefits provisions because the rules can slow and even prohibit the flow of aid dollars to disaster victims.

But duplication rules have another purpose, according to experts on FEMA policy. It prevents large, non-disaster-related infrastructure projects from being built with FEMA disaster aid.

That’s where critics say the Disaster Recovery Reform Act went off the rails, and it wasn’t by accident.

In fact, a handful of lawmakers — led by Louisiana Rep. Garret Graves (R), a member of the House Transportation and Infrastructure Committee — were instrumental in securing the waiver language, which Graves describes as "flood mitigation streamlining."

Graves makes no apologies for trying to steer more disaster dollars toward big infrastructure projects, including in his own state and district.

"I welcome a public discussion with anyone who argues that local officials shouldn’t have more control than the federal government over how taxpayer funds are spent in their own communities," Graves said in a telephone interview. "We shouldn’t be putting more restrictions on these disaster funds. We should be incentivizing the dollars to be spent in those places."

Authorized by Congress in 1992, the diversion canal is a $450 million Army Corps project designed to carry floodwater away from the suburbs of Baton Rouge to the Mississippi River during peak rain events.

Proposed in 1983 after record flooding on the Comite River and adjacent bayous, the 12-mile diversion project stalled for 35 years due to a lack of congressional appropriations. After another record-breaking flood swamped Baton Rouge in 2016, Graves doubled down on efforts to reform the Stafford Act’s duplication-of-benefits provision on the grounds that it was getting in the way of commonsense solutions.

He also found money for the Comite River diversion in a nearly $90 billion disaster recovery package passed by Congress in February.

As far back as 2005, when Louisiana was spending billions of dollars to rebuild from Hurricane Katrina, Graves said, "we repeatedly identified funding streams that one way or another had restrictions that prevented their best use." Graves said he saw the problem firsthand as chairman of the Louisiana Coastal Protection and Restoration Authority from 2008 to 2014.

Far from trying to impede FEMA disaster dollars from reaching victims, Graves argued that the Hazard Mitigation Grant Program (HMGP) and other funding sources are bloated with inefficiency. He said opposition to the reforms is led by "people who are trying to protect their fiefdoms and protect their jobs."

"I’d like to remind our friends at FEMA that their program budgets are coming from the same taxpayers that fund the Corps of Engineers," he said. "The objectives of HMGP are to make our communities more resilient and to reduce future disaster costs. This is also absolutely part of the Corps of Engineers’ mission."

FEMA and Army Corps did not respond to requests for comment on the waiver.

Graves stressed that the general waiver, found in Section 609 of the bill, does not provide "carte blanche" authority for governors to reroute FEMA funds to Army Corps projects. Rather, the president can approve or deny a waiver request based on input from the FEMA administrator and other agency heads.

In a February letter to Senate leadership, the Association of State Floodplain Managers warned that the duplication of benefits waiver is based on "vague and weak direction and requirements [and] will invite chaotic and potentially misdirected use of federal taxpayer disaster funds."

The group also raised concern that "FEMA’s hazard mitigation program could be turned into a ‘slush fund’ to build structural projects that fail to meet basic Corps of Engineers’ feasibility and funding priority tests."

A legislative aide with the Transportation and Infrastructure Committee, which vetted the bill, said that any Army Corps projects funded with FEMA dollars will have to meet a rigorous cost-benefit test and conform to all rules governing hazard mitigation grants, including a 25 percent state cost share.

"There’s nothing here that replaces or supplants the requirements for projects that are eligible for HMGP," the Republican aide said.

Even so, groups like the Association of State Floodplain Managers and NRDC say they fear that FEMA’s small pot of mitigation funds will be siphoned away by governors who prefer larger, more expensive flood control projects, even if those projects are environmentally and economically questionable.

"I think it’s a big probability, and even likely, that we’re going to see FEMA hazard mitigation money diverted to more of these Corps boondoggles," said Moore of NRDC.

Now FEMA watchers are waiting for a governor to make the first presidential waiver request. Florida, North Carolina or California would be obvious candidates given their recent disasters. But the betting odds are on Louisiana.