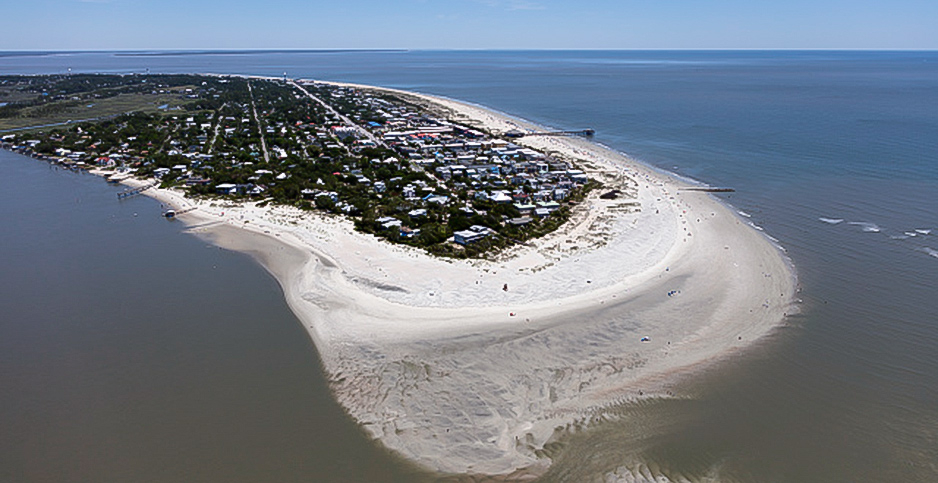 Tybee Island juts out into the Atlantic Ocean and is the easternmost point of Georgia. Carol Highsmith/Library of Congress

He also fears what might happen if there’s any sudden disturbance of the 55-gallon drums of radioactive waste that were routinely dumped into the Atlantic Ocean in the 1950s, with the approval of the now-defunct Atomic Energy Commission.

Opponents of offshore drilling have found a new reason to fight oil and gas exploration in the Atlantic: the possibility of disrupting long-buried radioactive and toxic waste, its exact whereabouts unknown.

"To me, that’s the nail in the coffin," said Keyserling, who has been mayor of the coastal city for 10 years.

It’s a growing concern all along the Eastern Seaboard as opponents await key decisions soon from the Trump administration on whether to allow five companies to conduct seismic surveying in the Atlantic.

Critics say the loud air guns used to send compressed air deep below the seafloor in search of new energy deposits pose too many unknown risks and that the companies should not be granted permits (E&E Daily, July 19, 2017).

"The radioactive material is still there, and we don’t know what will happen under seismic testing. … This is nothing to play with," said Frank Knapp Jr., president and CEO of the South Carolina Small Business Chamber of Commerce, headquartered in Columbia.

Industry officials say there is nothing for the public to worry about.

"This latest false claim against seismic surveys in the Atlantic appears to be yet another case of fearmongering by groups and officials opposed to oil and gas exploration and development," said Gail Adams, vice president of communications and external affairs for the Houston-based International Association of Geophysical Contractors.

She said seismic surveys have been conducted around the globe for eight decades without any scientific evidence that they have ever caused explosions or compromised containers with chemical or radiological waste.

"This issue has never been a concern anywhere in the world," Adams said.

‘Trash can’ for toxins

The so-called blast zone for proposed seismic surveys in the Atlantic includes South Carolina’s entire coastline and is twice the size of California, stretching from New Jersey to Florida.

The area overlaps with the general locations of 33 munition sites in the Atlantic, including five off the South Carolina coast, that were identified in a 2009 Defense Department report.

In a follow-up report to Congress in 2016, the department said the potential health effects from the sea-disposed munitions appeared to be minimal.

But the document also said it would be best to leave them in place, warning that recovering the munitions "may cause them to either break apart and release their contents or detonate."

"Either scenario can have an adverse effect on human health and the environment," the report said.

Knapp said no permits should be approved until the federal government can show with certainty that it knows where all the drums of radioactive waste are located.

"I am skeptical that they know where everything is," Knapp said.

Pleading his case in a letter to NOAA and the Bureau of Ocean Energy Management last month, Knapp called the buried waste "drums of death," adding that the toxic chemicals and radioactive materials pose "an undisputable threat."

He said records show the U.S. military used the Atlantic Ocean "as a trash can for all kinds of toxic materials" for more than 60 years, prior to the 1970s, and that disturbing them now could create a poisonous stew of mustard gas, lewisite, sarin and arsenic on the state’s beaches.

But Adams said the surveying would not be dangerous even if done above the munition sites. She said the compressed air is released 20 to 30 feet beneath the surface of the sea and would not produce enough energy to activate any explosive materials.

"Even when directly over abandoned ordnance or waste disposal areas, the energy from the sound source is insufficient to present a risk of cracking or damaging containers or activating explosive materials," she said.

The five permit applications are still under review by the two agencies that must decide whether to approve them, BOEM and NOAA.

Both agencies are feeling the pressure.

While opponents want more time to study the issue, industry groups say the federal government has moved far too slowly.

And the Government Accountability Office criticized the process in a report released in January, saying federal guidance for issuing the permits to companies interested in offshore oil and gas exploration is confusing and may result in unnecessary delays (Greenwire, Jan. 4).

In a statement last week, Nikki Martin, president of the International Association of Geophysical Contractors, said the "inexplicable delay represents a complete bureaucratic breakdown by federal agencies in what should be an otherwise straightforward process."

NOAA is expected to make its decision first, ruling whether to approve "incidental harassment authorizations" for the five companies. That would allow the "taking" of marine mammals — harming or killing — provided that NOAA Fisheries found it would have only a "negligible effect" on a species.

Chris Oliver, the head of NOAA Fisheries, told a Senate panel last week that the agency is still reviewing more than 117,000 comments it received on the subject last summer, many of them involving highly technical and legal issues.

"That process is taking a little bit longer than we expected, but we expect within the next few weeks to have made a decision on those authorizations," Oliver said.

If the permits are approved, companies would coordinate their work with the Department of Defense to make sure it’s done safely and doesn’t conflict with any military operations, said Tracey Moriarty, BOEM’s deputy chief of public affairs.

In addition, she said, any company that discovers unexploded ordnance on the seafloor would be required to report the incident to the agency.

But Knapp said strong ocean currents in the Atlantic can easily move the discarded munitions from their original disposal sites, adding to the uncertainty.

He noted that last year, for example, the National Park Service had to close part of the beach after an unexploded ordnance was found near Cape Hatteras National Seashore’s beach access in Avon, N.C.

It caused the Park Service to warn beachgoers that "a variety of hazardous items may wash ashore" at the park during severe weather.

‘Know what they know’

Last month, Knapp filed a request under the federal Freedom of Information Act, seeking more information on the ammunition dumps from the Defense Department, Commerce Department and Nuclear Regulatory Commission.

The requests asked federal officials to release all records showing the exact locations of the sites, types of toxic materials buried in them, the kinds of containers used and the weight of the deposits.

"We want to know what they know," Knapp said.

So far, more than 190 East Coast municipalities and more than 1,200 local, state and federal officials are on record opposing any "offshore drilling activities" in the Atlantic, according to Oceana, an environmental group that’s tracking the opposition.

They include several South Carolina mayors, like Jane Darby of Edisto Beach, who worries what will happen to tourism if it’s threatened "by toxic chemicals rolling in with the waves just from the exploration for offshore oil."

And Jimmy Carroll, the mayor of the Isle of Palms, fears the worst if any radioactive waste gets disturbed: "Even the thought of this sickens me."

Opponents say they’ll sue to try to block the seismic surveys if they’re approved by the Trump administration.

Keyserling said residents of Beaufort "are horrified and ask what they can do to help." So far, he said, 16 South Carolina municipalities have pledged to join the South Carolina Small Business Chamber of Commerce if it’s necessary to file a lawsuit.

Like Keyserling, Knapp is worried about that missing nuclear bomb.

A B-47 bomber dropped it near Tybee Island on Feb. 5, 1958, after the plane accidentally collided with a fighter jet during a training mission.

After a long search for the weapon, Herbert Loper, then the assistant to the secretary of Defense, wrote a letter to the chairman of the Joint Committee on Atomic Energy, saying the search had been discontinued on April 16. He said the bomb was considered "irretrievably lost" after the accident near the mouth of Georgia’s Savannah River.

Sixty years after the bomb was swallowed by the sea, its location remains a mystery.