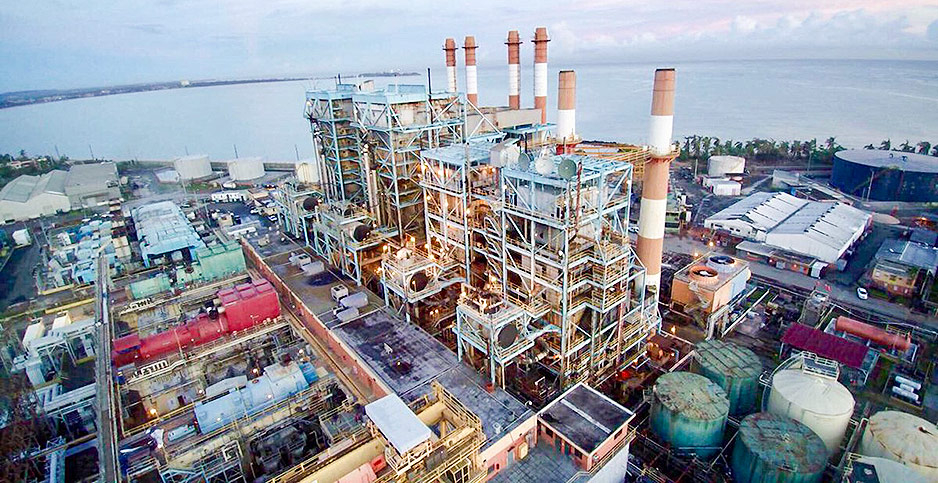 If any company is in the position to alter the course of Puerto Rico’s grid, it’s AES Corp. The Virginia-based power giant has a division on the island that operates both a big coal plant and a small solar farm, meaning it straddles the island’s past and, possibly, its future.

But even its bid to enhance the grid is going slowly. It is sending six giant containers of lithium-ion batteries — 6 megawatts of flexible power that could be enormously helpful restoring service to an island where most people are still without electricity after Hurricane Maria’s Sept. 20 landfall. But it doesn’t know what the batteries will be used for because the local power company, the Puerto Rico Electric Power Authority (PREPA), hasn’t given any guidance.

AES’s batteries are part of a chaotic effort to reshape Puerto Rico’s grid even as it emerges from the rubble. A growing chorus of players see the rebuild as a chance for a historic do-over that could make the grid cleaner and more resilient. They are sending supplies and laying plans. But as they talk, the U.S. government is spending hundreds of millions of dollars to rebuild a replica of the grid that the hurricane destroyed.

For its decades of existence, Puerto Rico’s grid has been a traditional hub-and-spoke system that connects large, centralized power plants to end users by long transmission lines that cross a rugged mountain range. Most of those plants run on fuel oil, which pollutes heavily, and the oldest were installed when Dwight Eisenhower was president.

On the TV news magazine "60 Minutes" last week, the CEO of PREPA, Ricardo Ramos, called the island’s grid "a junker."

Ideas are out there for making the grid better. PREPA and its regulator, the Puerto Rico Energy Commission, agree that the generators at the dirty plants should be replaced with cleaner, more efficient natural gas turbines, though big differences remain in the details. Some say that wind and solar farms could help avoid the high costs of importing fuel — though some of those same farms were damaged by the hurricane. Power lines could be wind-proofed by burying them. Batteries and microgrids could toughen the system against high winds.

But seven weeks after the hurricane hit, no one has the authority to carry out a vision. Solutions are slow, lurching and uncoordinated.

The courts and Congress are in the midst of a messy process of figuring out who has the final authority over what the grid will look like.

Is it PREPA, which is severely understaffed and $9 billion in debt? Is it the energy commission, which has existed for only three years? Will it be the Financial Oversight and Management Board (FOMB), which was established last year in Washington, D.C., to oversee the economy of the bankrupt territory but is widely unpopular on the island?

Meanwhile, the U.S. Army Corps of Engineers is rushing to get the lights back on. Its assignment from the Federal Emergency Management Agency is "to perform emergency repairs to the grid," said Army Corps spokesman Jeff Hawk.

To date, it has awarded $327 million in contracts to two mainland power companies, Fluor Corp. of Texas and PowerSecure International Inc. of North Carolina, to rebuild transmission and distribution lines. It has also awarded $54 million to two other companies, Weston Solutions Inc. of North Carolina and Aptim of Louisiana, to build and operate emergency generators inside two of PREPA’s existing power plants. The goal is not to replace existing generation but to stabilize the grid until transmission lines are rebuilt, Hawk said.

In sum, officials in Puerto Rico and Washington are in the difficult position of rebuilding a grid as fast as possible while also trying to reshape its foundations.

"I think there’s a lot of desire to help but not a lot of ideas about how to actually do it," said John Berger, the CEO of Sunnova Energy Corp., a Texas-based firm that is the biggest rooftop-solar installer in Puerto Rico.

The shape of Puerto Rico’s future grid is confused, because no one yet has the authority to dictate what the future grid will look like.

PREPA, the island utility, is conducting repairs, but it has few resources and is distrusted by officials in Washington. After Hurricane Maria hit, PREPA forsook aid from other American power companies and hired Whitefish Energy Holdings LLC, a tiny contractor, to rebuild major parts of its transmission system for $300 million. Controversy around that contract caused its cancellation two weeks ago.

Ramos, PREPA’s CEO, was a no-show at a U.S. House Natural Resources Committee hearing meant to scrutinize the Whitefish contract and recovery efforts.

Another option to steer Puerto Rico’s future grid is the island’s financial oversight board, FOMB, which was established last year by the Obama administration to control the purse strings of the Puerto Rican territorial government as it restructures $72 billion in debts.

FOMB has proposed making one of its key officials, Noel Zamot, into a "transformation officer" who would sit atop PREPA to guide its investments. At the House hearing, Zamot said his vision for Puerto Rico was "50 percent renewables by 2040, with the balance a natural/LP gas mix; regional grids with generation close to demand; physical hardening and control schemes to provide resiliency; and widespread distributed generation, all wrapped by an empowered, accountable energy regulator."

He said that he will have a draft of "a wholesale reimagining of the grid" by mid-December.

If successful, Zamot’s appointment suggests that mainland utilities and various federal agencies would have influential roles in reshaping the territory’s grid. Zamot said he has already been meeting with FEMA and the Department of Energy and that he is hearing from the Edison Electric Institute, an association of investor-owned power companies, and the American Public Power Association, which represents municipal utilities.

DOE is researching opportunities to install microgrids in PREPA’s network to make facilities more storm-resilient, according to Carl Imhoff, the director of electric infrastructure markets at the Pacific Northwest National Laboratory, which is one of DOE’s national labs, in testimony before the Senate Energy and Natural Resources Committee.

DOE is also working out where vulnerable substations should be relocated to deal with flooding risk, and potential locations for backup batteries to maintain water service in blackouts.

Funding from FEMA could cover three-quarters of the costs of storm-hardening changes in the island’s grid that get federal approval.

Still, other options for reimagining the grid could come through the Puerto Rico Energy Commission, which was established three years ago as the first body to ever oversee PREPA. Earlier this year, it prompted PREPA to submit its first-ever integrated resource plan, which describes where a utility intends to obtain its power and how it intends to pay for it. PREPA suggested replacing its ancient oil-powered generators with natural gas turbines and supplying these new power plants from a floating gas terminal off the island’s south coast. The energy commission agreed with the idea in principle but rejected PREPA’s plan for lacking crucial details.

The commission, in a legal brief to Swain, said it would cooperate with FOMB but defended its role as the last word on Puerto Rico’s grid.

Meanwhile, other entities are seeking to influence the outcome.

The Institute for Energy Economics and Financial Analysis, a think tank based in Cleveland, wants Puerto Rico to seek private investment in distributed energy resources, including combined heat-and-power plants, microgrids and renewable energy to power key centers like hospitals, universities and large employers. It advocates for slashing PREPA’s budget and for replacing the utility’s one-size-fits-all electricity rates with a two-tier structure: 15 cents per kilowatt-hour for industry and 21 cents per kWh for individual consumers.

The Rocky Mountain Institute in Colorado has been promoting its microgrid projects on other Caribbean islands.

"We are working with partners to design a new 21st-century, hurricane-resistant system" for Puerto Rico, said Chris Burgess, a director of projects at the Rocky Mountain Institute. That grid would have buried distribution lines; rely on distributed solar power and batteries; and support hospitals, shelters, and police and fire stations with microgrids. He added that the principal argument is that renewable power is more cost-effective than fuel oil and less subject to violent price swings. "Fuel is the No. 1 cost to the electricity customers," he said.

Berger, the head of Sunnova, said he is shopping around a proposal to take the federal solar investment tax credit, which companies and residences can take advantage of to lower the cost of a solar system, and tweak it for Puerto Rico and the U.S. Virgin Islands, which was also pummeled by Hurricane Maria. Instead of a tax credit, it would for a period of time be made into a direct cash payment that would spur quicker investment in solar power.

Meanwhile, AES, the long-standing Puerto Rico energy player, has ideas of its own. It points to 20 MW of battery-based energy storage that it has deployed in the Dominican Republic, where it helped maintain grid reliability in September when Hurricanes Irma and Maria raked the island.

Praveen Kathpal, AES’s vice president of energy storage, said in an interview that the batteries provided frequency control during the storms, providing second-to-second balancing of supply and demand, and smoothed out swings in frequency as the hurricane knocked out lines.

"Battery resources are fast and very accurate, versus ramping up and down with conventional power plants. They are three times more effective in doing that," Kathpal said.

The storage units are enclosed, with a low profile that leaves them less exposed to storms, and they came through unscathed.

"When the conversation turns to rebuilding, we very much want energy storage to be included as part of a modernized, rebuilt Puerto Rico grid," Kathpal said.

AES has company in wanting to supply new kinds of power to the grid. One is a donation drive run by the Solar Foundation and the Clinton Foundation that so far has gathered $5 million worth of solar equipment.

Few have received as much publicity for their efforts as Tesla Inc., the battery and electric-car maker. In late October, it stood up a solar array and battery system to power a children’s hospital in the capital of San Juan. The company said on Twitter that the project "is first of many solar+storage projects going live" but hasn’t provided details.

Others are looking to supply help while also proving concepts. Arensis is a Los Angeles-based maker of generators that use biomass for fuel. Its 50-kilowatt system at an airport on the northwest side of the island has been moved to the main sports complex in Fajardo, which is now a refugee center.

There, it will use debris from fallen trees to supply electricity to keep lights on and power refrigerators. If it connects as planned, the company will ship in 30 more generators, said Wilfredo Reyes, the company’s business development officer and a native of Puerto Rico.

"We want to focus on a project that not only creates an impact on the ground but with our partners proves that this is a project that can work," Reyes said.

One effort works on an even humbler scale. Casa Pueblo is a community organization based in Adjuntas, a town in the mountains, that powers its operations and radio station entirely with solar power. By appealing to its allies on the mainland, it has gathered 500 solar lanterns, with many more on the way. Casa Pueblo is passing them out to people who don’t have any electricity, which in the rural areas of Puerto Rico means everyone.

"We’re actively engaging in helping communities to think about solar power," said Arturo Massol, a professor at the University of Puerto Rico and a principal at Casa Pueblo. "It’s a great tool for solar education."